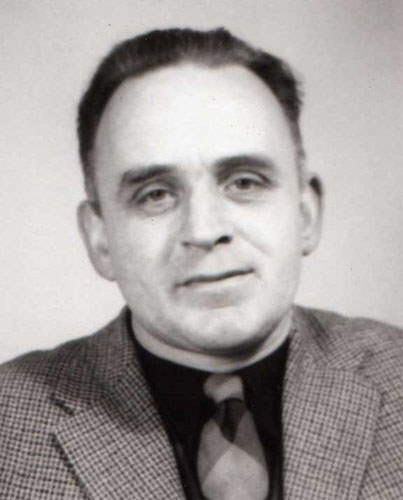 Tom Pain who died aged 87 on 2nd. June 2003 had a remarkably wide knowledge of both marine and non-marine molluscs, both recent and fossil. He will be remembered mostly for his extensive work on tropical African non-marine molluscs (much of it together with T.E. Crowley). He was particularly interested in ampullariids and achatinids. His favourite marines were the whelks. He quite definitely was not keen on tiny species.

He was born at Brentwood, Essex on the 13th. October 1915 during a zeppelin raid on London. His father Tom married a wealthy lady Clara Freeman and there were three children. The eldest, Henry, was 17 years older than Tom and after Sandhurst had obtained a commission in the army; the youngest, Catherine, became a nurse. He went Brentwood public school where he enjoyed rugby and cross country running. His interest in natural history developed early. During summer holidays he went with his nanny and sister to Walton on the Naze and discovered butterflies, moths and fossils. The area is an ideal one with diverse habitats of grassland, scrubby woodland and salt marsh apart from the London Clay and Red Crag deposits. Whilst still at school in the early 1930’s he worked as an assistant to the curator of the Chelmsford and Essex Museum — at first voluntarily but later as a paid worker. One of his first jobs concerned sorting out a box of shells from the Ritson collection which was the start of his interest; collection contained some Ampullaria which were to become his specialisation. Whilst working on this collection he visited the Natural History Museum and met Major G.I. Crawford then head of the mollusc section. He was introduced to Hugh Fulton, the surviving partner of the shell dealers Sowerby & Fulton. He also met E.G. Alderson the author of the revision of Ampullaria who died in 1933. This gave great impetus to Tom’s growing interest in Mollusca. He began to study for a geology degree at Imperial College but in 1938 gave this up to become curator of the Georgetown Museum in what was then British Guiana. He stayed there three years, during which time he had the great good fortune to join an expedition to Mt. Roraima, the great flat plateau at the junction Brazil, Venezuela and Guyana which had inspired Conan Doyle’s ‘Lost World’. There were no dinosaurs of course and virtually no mammals or snails but they collected butterflies and other insects. Much of it is in the Hope Department of Entomology at Oxford University Museum. The swamps around Georgetown were ideal habitats for ampullarids and his interest in the family grew. The climate in Georgetown is appalling and he opted not to do another tour of duty there but went to Jamaica where he invested and helped run a hotel business. He also collected and sold snails and marine shells to the well known dealer Walter Freeman Webb. He was lucky to be able to visit the famous cockpit area with its innumerable operculate snails. From Jamaica he visited Cuba, the Cayman Islands and Nicaragua. He collected land snails for Paul Bartsch of the U.S. National Museum. A collection of Jamaican marine shells is in the Chelmsford Museum. 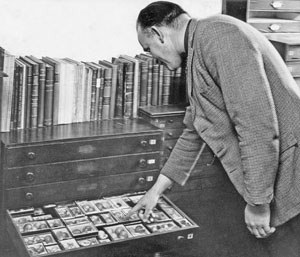 Tom Pain at a drawer of Ampullaria shells.
Photo c. 1965

The hotel business ceased to be viable and in 1941 Tom decided to return to England but the Fyffes’ banana boat he travelled in was torpedoed. A Royal Mail ship bound for Buenos Aires very fortunately sighted the lifeboat he was in and he arrived in Buenos Aires just before Christmas 1941. Christmas was spent luxuriously with the British Ambass at the Embassy. Tom made light of this enemy action but he was lucky to have survived. He finally reached Liverpool in the Blue Star liner Andalusia Star and fortunately without incident save that the ship which was of course in convoy was so much faster that it was eventually given permission to go it alone.

He was of course called up and joined the Royal Corps of Signals but later transferred the Royal Army Education Corps for the rest of the war stationed at Dover. After being demobbed he worked for British Rail for 35 years based on St. Pancras, first as a guard but eventually as a Senior Conductor. This had great practical benefits since he could travel for almost nothing for the rest of his life. The rest of us who had to pay a King’s ransom for a short journey were always envious! 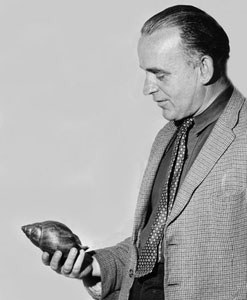 Just after the war his interest in molluscs intensified and he joined the Malacological Society in January 1946 and the Conchological Society at the end of the same year. He had been very unfortunate with his collections from America. Those he had with him went down with the boat and those in Georgetown Museum were destroyed when that was burnt down in the 1944 fire. Only material he had posted home survived including specimens later to become types of several new species. His collection and library grew very quickly and occupied more room than anything else. When Fulton died his wife was left with the shell business including a huge collection. Despite help from A. Blok and G. Wilkins it proved impossible to make the business pay during the war. Tom had been left some money and bought the land and freshwater part. He became friendly with Major Connolly the expert on African non-marine Mollusca who was an honorary worker at the Natural History Museum and helped him as an honorary curator. Connolly died in 1947 and although he had officially given much of his huge collection to the Museum years before quite a lot of material and books passed to Tom. Tom often told the story of having been introduced by Malcolm to his son Cyril Connolly with the words this is my son — he is a fool! A rather harsh judgement on an old Etonian who, even before his father’s death, was a literary giant.

I was always amazed at the number of times Tom changed his address in the early days until he ended up in Landseer Buildings then Reynolds House in Millbank just behind the Tate Gallery. I remember him telling me that the rent was much less than he would have had to pay to keep his books and collections in a warehouse! He could produce almost any book you needed and specimens of almost any genus. Eventually some of it had to go and he pruned his collections and sent a great deal to the Melvill-Tomlin collection at Cardiff. His land and freshwater material and whelks will go this institution. A card index which Tom kept shows that he had holotypes or paratypes of 232 taxa. The collection included material from classical collections such as G.B. Sowerby III and E.G. Alderson.*

There was undoubtedly friction between Tom and the Mollusca Department of the Natural History Museum which resulted in him not being allowed to work there. He had early annoyed Major G.I. Crawford by very foolishiy putting a degree after his name to which he was not entitled. Crawford was a stickler and went out of his way to investigate. Apart from this he undoubtedly borrowed material without proper permission. I became innocently involved in this because he gave me some material to photograph and when the photographs were published (PAIN 1949c) they were acknowledged to the British Museum photographer! I said nothing to anybody not even to Tom. I suspect it was Bill Rees who found out. He had been in charge of molluscs since just after the war. He did not like Connolly or Tom nor me – all amateurs. In fact he warned me to beware of Connolly’s determinations! None of this mattered since Tom collaborated with Crowley who had always had good relations with the department.

Tom left the Malacological Society about ten years after joining. The Conchological Society was very much to his taste and he was a very regular attender at meetings until the end of his life and very frequently put on interesting exhibits. He joined the council in 1967 and became President in 1970–71; his Presidential Address was of course on the Ampullariidae [PAIN 1972b]. Above all he will be remembered as the officer who for years arranged field meetings; he had a particular flair for this – possibly the discipline of work on the railways had something to do with it. He also arranged geology and land snail field meetings for other societies particularly the Northampton Natural History Society of which he became President.

Tom was admitted a Fellow of the Linnean Society in 1972 and there is no doubt he enjoyed attending meetings of scientific societies. He was an enthusiastic member of the British Shell Collectors’ Club of which he was president in 1977–1979 and 1994–1997. He had in later life become interested in British marine mollusca and worldwide Buccinidae and Muricidae. He also had a large collection of Jurassic ammonites which he eventually sold.

Apart from molluscs he was interested in Egyptology and archaeology in general. He helped Sir Mortimer Wheeler and Margaret Murray with shell identifications. Trees, especially conifers, interested him and the larger fungi.

Tom married Doreen Gantzer before the war and they had one son Christopher. Later he met Marjorie Whittaker who changed her name by deed poll to Pain and they had a daughter Susan. Tom and Marjorie separated in 1957 and she settled in Kenya where she worked at St Andrews School at Turi. She retained her interest in snails and some of her collections are in the National Museum of Kenya including some new taxa. Marjorie Powell was killed in a motor accident a few years later. Tom later married Celia Janet Honnor who had joined our Society in 1966.

Undoubtedly Tom and Celia did a great deal to encourage people to support our Society by their enthusiasm for molluscs and great support of its meetings and helped keep the Society in the best traditions of those catering for amateur natural historians.

I am very grateful to Celia Pain for many of the details about Tom’s life which despite knowing him over 55 years I knew nothing about.

* It would be out of place to attempt to list all these but it is hoped Cardiff will prepare a catalogue in due course.