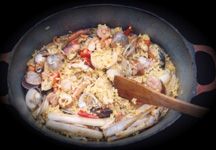 The use of molluscs as a food source dates back to early man with enormous heaps of empty shells having been found by archaeologists in most parts of the world. Today the nutritional benefits of seafood as a source of first class protein and essential vitamins and minerals are well known.  Although fish and shellfish are generally low in fat, the small amount of fat they do contain is beneficial, notably Omega-3 fatty acids that play a protective role against heart disease.

Despite the fact that Britain is relatively conservative in what it eats, there are still a large number of species of molluscs which are harvested commercially. This includes the well known winkles, oysters, mussels, cockles, scallops as well as a number of species of cuttlefish and squid. However, few species of mollusc are actually poisonous and there are a vast range of species that can be eaten including limpets, slipper limpets, Razor shells, Whelks and a range of clams including venerids or carpet clams such as Venerupis species.