Palaeontologists working on molluscs are fortunate to find the relatively rich record  left in the rocks; relative, since living molluscs are much more diverse. The sea-floor is all available for us to study, even if we cannot reach some of it, it is still there when we can. Ancient sea floors are stacked one above the other and embedded in rock  formations. If you take any level that was once a sea floor, at best we have only a few  windows or openings in which to view these rock formations in temporary excavations, quarries, road and rail cuttings, tunnels and coastal cliffs. A mile long cliff of  sedimentary rocks is a gift of the gods to a palaeontologist but, collecting from one  bed or horizon, an ancient sea floor, is like laying a mile long cable on the present  sea floor and collecting only those animals actually touching it. Most of the rest of  the fossil shell bed is buried in the formation, perhaps extending hundreds of miles inland. Little wonder that assembling evolving series is difficult and seldom complete. Our present sea floor occupies only a thin 'slice' of time, but is completely available; while the fossil record extends 5.6 million years back to the Cambrian period, but most of it is buried in the rocks – a case of 'swings and roundabouts'.

In addition to their temporal range and geographical distribution, molluscs tend to occur in huge numbers. A Tyrannosaurus might once have had a territory the size of, say, Canterbury, but leave only skeletons of itself, its mate and a few offspring. The same area at the bottom of the sea might contain millions of molluscs.

The presence of a calcareous shell; aragonite in cephalopods, gastropods and scaphopods, and mixed calcite and aragonite in bivalves, accounts for the rich record. The purely calcitic shells of oysters and scallops ensures that they have a near-complete record because calcite is stable while aragonite is not, and either converts to calcite or dissolves leaving only an empty space in the rock, which may fill with sediment so that the 'shell' is preserved as a cast.

Even the hinge of a bivalve will tell us something of its life style. A hinge with no teeth indicates a sessile infaunal habitat (e.g. Pholadomya); a strong hinge with elongated lateral teeth tells us that the bivalve was an active burrower (e.g. Cardinia); while an attached or cemented shell will have an attachment scar as the clue to its mode of life (e.g. Liostrea).

Unlike living and fossil vertebrates which do not preserve their juvenile stages, a well preserved mollusc may still have the protoconch at the apex of gastropods and cephalopods, and the prodissoconch at the origin of the bivalve shell. Rarely, a spatfall of 3mm fossil oysters has perfectly preserved larval shells with a complete history of their subsequent maturation.  We can interpret the lives of the fossils because of the study of their living descendants. The more we learn about living molluscs, in organizations such as the Conchological Society, the more we are able to make sense of their fossil ancestors. Palaeontology has moved a long way from the foundational necessity of correctly describing and validly naming new species, though that still continues. Using what we have learned from living molluscs we can now reconstruct the development, and ecological relationships, of many fossil molluscs and only the shell-less larval stage is hidden from us. Wholly extinct groups such as ammonites and belemnites present problems. But they are cephalopods, and we know about the constancy of the living cephalopod 'body plan', so the extinct forms are likely to share in that familiar lay-out of organs. It is now a lot more fun, though it was a serious area of study to our forbears, Lamarck, the Sowerbys, Schlotheim, Agassiz, and the rest of the great pioneers. Lyell's principle "The present is the key to the past" still has the force it had when proposed, nearly two hundred years ago. The study of living and fossil molluscs has a seamless relationship, and the latter depends heavily on the former. They go together, as the song says, "like a horse and carriage".

A brief and highly condensed over view of the geological history of the Mollusca shows that the scope of the study is among the longest-ranging and most prolific, of any major group of animals.

The class Cephalopoda first appear in Upper Cambrian rocks, some 500 million years ago, and are still with us, though still conservatively confined to the sea. Their greatest diversity was during Mesozoic times when nautiloids, ammonoids, belemnoids, squid-like trachyteuthids dominated the seas. A soft-bodied octopod has even left a convincing impression in Upper Cretaceous rocks of Lebanon. All known living cephalopods are carnivorous, lay eggs and have no free larval stage, and there are no reasons to doubt that the extinct forms were much different.

Scaphopoda are equally conservative, and confined to the sea, and scarcely variable in form. A late Palaeozoic scaphopod is often little different from living specimens dredged off the coast of Japan. Their history is shorter since recent reaearch has shown that some putative ancestors to the Scaphopoda, are serpulid imposters (see figure of Ditrupa and Antalis); but it raises the first appearance of undoubted scaphopods to the lower Carboniferous. These animals are exclusively marine, carnivorous, but have a planktonic larval development. 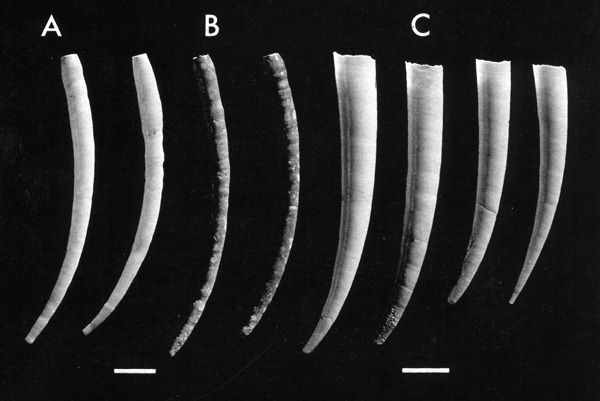 The bivalves, though mostly marine, have invaded, and flourish, in lakes and rivers.. When they occur, bivalves are often very abundant forming thick shell beds, particularly oysters. Some are sediment ingesters, most are filter feeders, and the Cuspidaria group are surprizingly carnivores. For the most part they reproduce as planktonic larvae, though some retain fertilized eggs and release veligers.  Bivalves, first appear in Cambrian rocks and, because of their abundance and calcitic shells, produce enough fossils for palaeontologists to postulate convincing evolutionary series.

Gastropods, with a long history in the sea have been the most adaptable of all molluscs having invaded fresh water in lakes and rivers, and the more difficult terrestrial habitat, found in jungles, caves, and high in mountainous regions. Their diversity equals the cephalopods and similarly, they have an origin in the Cambrian. They are carnivorous, herbivorous and scavengers, most lay eggs or have a full planktonic development. They munch your lettuces, carry liver fluke, drill holes in bivalves and are the principle items sought after by shell collectors.

The rest of the molluscs, Chitonida, Monoplacophora and Aplacophora, are small groups, not popular with either shell-collecters or researchers. The shell-less and worm-like Aplacophora has no fossil record, but the larvae have a chiton-like stage. The Monoplacophora and Polyplacophora (chitons) range back to the Cambrian but have a poor fossil record. Great excitement was generated when the first Monoplacophoran limpet-like shell was discovered last century, and proved to be a living fossil with segmentally paired muscle attachment, exactly like the scars left on internal moulds of the Lower Palaeozoic examples.

Molluscs have inspired many people to collect their shells for aesthetic reasons; but they are also a rewarding group to work on since they are widely distributed, abundant and there are always new things to be discovered.