By Tom and Celia Pain 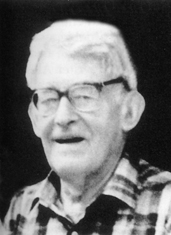 Terence (Terry) was born in Otley, Yorkshire on the 12th July 1915. He was educated at Bradford Grammar School and Leeds University, graduating in 1937 with a B.Sc in Engineering. After graduating, he was frequently employed by the Ministry of Defence throughout his life. While he was with them he was one of the first people to learn American 'time study' which was improved and became 'method study'.

During the 2nd World War Terry spent some of his time in London. During the course of the buzz bomb raids, he developed the idea of the Bonus Scheme for rewarding workers who did an exceptional job. In Terry's case this was getting temporary and permanent prefabricated buildings put up very quickly to accommodate homeless people. He went into partnership with R.H. James and Partners to prepare bespoke Bonus Schemes but it was wound up in 1956. Terry rejoined the Ministry of Defence and worked at Denham for a few years. He was seconded to the US Air Force at Brize Norton as a civilian engineer. In 1964 Brize Norton was handed back to the Royal Air Force and Terry was then employed at Upper Heyford until he retired in 1975 at the age of 60.

On retirement Terry learned china mending from an expert and was much in demand, turning his hand to other things too. He assisted at Woodstock Museum including being woodlice recorder for several years. This was in addition to his extensive array of non-molluscan interests, the most important of which was motor bikes. He was interested in fossils, coins, weapons, clay pipes, beam engines, church architecture, stately homes, D. H. Lawrence, railways, and musical boxes and ran the Bampton Sunday School with his wife Wendy He wrote four books for the Shire Publications: Discovering Old Motorcycles (1973, 1977, 1978, 1981); Discovering Old Bicycles (1978, 1981); Discovering Mechanical Music (1975, 1977) and Beam Engines (1976, 1978, 1982, 1986). Terry wrote a more scholarly book on beam engines, Beam Engines: a massive chapter in the history of steam, published by Oxford, Senecio Books, 1982, which he was revising for a second edition when he died.

Terry married Miss Wendy Peake in 1939. They had first met on the Yorkshire coast in 1935 when Terry was on a student field course and Wendy was employed as a potter. Wendy was well known to Conchological Society members for her warm hospitality at Bampton and organising teas at the Society meetings. Wendy was an extremely talented artist, as befitted a Peake. She excelled at terracotta models of people. Wendy and Terry had one daughter, Linnet.

Terry joined the Conchological Society in 1951 at the instigation of Guy Wilkins. He was elected to the Council in 1955 and served the Society as Honorary Secretary from 1960–1970, covering meetings, general enquiries and membership matters. He was appointed President in 1972–3, proposed by myself. He gave two presidential addresses (1973, 1975). He was honoured by being elected president again for the centenary year of 1976 and was elected an Honorary Member in recognition of his services to the Society.

Terry's principal molluscan interest was in African land snails. He wrote reviews on the taxonomy of African Achatinids with T. Pain. These were published in the Annals of the Musee Royal de l'Afrique Central, Tervuren, Belgium as most of the work was based upon their collections. Ordinary colonial civil servants were instructed to collect all sorts of specimens from their locale and send them to the museum. They have, in consequence, the largest collection of West African land snails in the world. Terry was an Honorary Research Associate for many years, making numerous trips to work there.

Terry had a trained and analytical mind and was able to identify and enumerate the characters of the species in the group in question. This was an invaluable asset when confronted with masses of specimens that were accumulated to make the taxonomic work possible. He was a good draughtsman and an excellent technical writer. All species were based on shell and animal morphology, distribution and colour as neither allozyme electrophoresis or DNA fingerprinting were yet available. Opinions on the species and papers were sought from other land snail workers, principally the late Dr. Joseph Becquaert and Dr. Bernard Verdcourt. J. Becquaert also looked at types in the Smithsonian Museum, Washington, D.C. and gave his opinion about their identity. Many duplicate specimens from the Musee Royal de l'Afrique Central were added to Terry's collection with permission from the curator. The large collection of land shells has been presented to Leeds Museum.

Terry Crowley was an amateur taxonomist who brought order out of the mares nest of species which was the legacy from the Victorians. He had a feeling for species and made good judgements about them. His work remains valid today.

We are grateful to Adrian Norris (Leeds Museum) for providing the following transcript of a short interview with Terry in January 1993:

"I was always interested in natural history, even in the early days. My father fought in the East African campaign in the last war and he brought back a number of trophies of various kinds, which always interested me, including shells. These were not very good as specimens, as they had been picked up on the beach at places like Durban on his way into the interior. He also brought a number of Pila ovata gordonii from Lake Nyassa. In those days schistosomiasis was not understood of course, and the life history of the Bilharzia was still wrapped in mystery. As a doctor he felt perfectly sure that the intermediate host was a shell, and he picked on Pila ovata gordonii, incorrectly of course, as we know now, as the probable intermediate host. But his military duties, as a doctor, certainly didn't allow him to investigate in any detail. However, these shells came to me and when I evolved a child-like museum of my own at a very early age."

[What age was that?]

"We lived in Harrogate, I must have been about 9 or 10, people used to give me odds and ends"

[You lived in Harrogate?]

“Yes I was born in Otley, and we moved when I was about 6, and my people lived there until after the war. The enthusiasm was then dormant then until about 1950, when I found myself in London. My home was then in Lancashire, but I was drafted, here and there on various jobs, and not able to get together, until some years afterwards. In 1950, I was in digs in London, and through a mutual friend, I met Guy Wilkins, who somewhere about that time was president of the Conchological Society, and he took me home, and his shell collection was something of a revelation to me. Also the enthusiasm, which is well known, Guy talked about, and he said well if you are marooned in London with nothing to do, why don't you join the Conchological Society, and he gave me a collection or shells, odds and ends, that he had around the place, beautiful specimens, but mostly without localities, and he sold me cheap, a number of books, including Chenu, which really set me off. I took his advice and I joined the society. He was then in an advertising firm, and he did a lot of artwork. He was a very fine artist, hut later on of course, he joined the British Museum as a shell curator, and I was always welcome there."