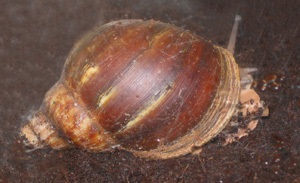 Archachatina – These are considered more primitive than Achatina. They usually have a blunt tip to the shell, and they lay 5-10 large chalky eggs at a time. The largest species is Archachatina marginata which can grow up to 12cm long and has a characteristic yellow stripe inside the lip of the shell and a brown body. Archachatina degneri is smaller (about 8-9cm) and has a purple stripe inside the lip and a dark stripe running along the centre of its body.

Achatina – These are similar to Archachatina, but have a pronounced pointed tip to the shell. They lay huge clusters of jelly coated eggs, sometimes as many as 500 at a time but more often 40-100. Achatina achatina is the largest of all land snails, and has a characteristic yellow-brown and black zigzag patterned shell and a black skin with white or grey tubercles. The largest specimen was 450g in weight and had a shell length of 37cm! Achatina fulica is the most well known of African Land snails as it is a prolific breeder and has colonised many tropical countries and become a pest in many. It has a brown mottled shell and skin colour similar to Archachatina, but its tubercles are coarser.

There are many other kinds, but these are the ones most frequently found in pet shops.

Does it matter which kind of snail I have? No, not really if you just want to keep them as pets, as they all have similar requirements. However, if you keep Achatina, you need to be aware that they are going to produce lots of offspring, and you will need to dispose of them sensibly and humanely. It is illegal to release them into the wild in the UK. As all snails are hermaphrodite, any two snails of the same type can breed and produce young, so you could have this problem with any species. It is advisable not to keep more than one species in the same tank.

BE A RESPONSIBLE pet snail owner.

A helpful guide to keeping Giant African land snails as pets is available to download as a PDF from the RSPB HERE.

Snails imported to the UK can carry diseases so it is best to obtain ones that have been bred in this country if possible. Usually these diseases are only transmitted to humans if there is lack of proper hygiene, therefore it is quite safe to handle your snails without gloves, but you should wash your hands afterwards.

From the viewpoint of snail welfare, it is best not to handle your snails too often, especially if you are waking them up to do so. However they do get used to being touched and will respond to being handled, often gently grazing sweat and salts from the skin (which may tickle but will not hurt you). Don't hold the shell by the delicate part where the new growth joins on to the existing shell – this corner is a particularly delicate area – unfortunately it also happens to be one of the most natural places to put your fingers when you hold your snail! To get a snail off the side of a tank I find it is best to spray the snail and your hand, then gently slip your finger under its head, then using both hands slide a few fingers under its body, while gently supporting it with the other hand.

There are many pests and diseases that attack African Land snails in their native environment but many of them do not seem to occur with captive snails. There are too many to list here and most vets know very little about the subject. With proper care most snails will live to a ripe old age of 8 - 10 years.

Most species are able to breed at 9-18 months, and can breed all year round. Eggs take 4-8 weeks to hatch, depending on species. Remove the eggs from the tank, separate them from the substrate and dry them out at room temperature for three days. Apparently if there is less than an 1inch of substrate the snails are discouraged from breeding. If you cannot find homes for surplus young you should destroy the eggs by freezing or boiling.