I recently had to identify some Oxychilus from South Wales, a job made considerably easier thanks to the work of Mr. J. Davy Dean (1876-1937). Dean (“Davy” seems to have been his preferred first name) was a member of CSGBI for forty years, and served as Assistant Keeper at the National Museum of Wales, Cardiff for nearly twenty. His large collection of molluscs was just one of his legacies to the Museum, where his elegant, characterful printed handwriting adorns many labels and registers in the Mollusca and Entomology collections and his diorama artwork was once featured prominently in the galleries.

Dean’s land-snail collection, much of which is from South Wales, is invaluable for identification purposes when it comes to tricky groups like zonitoid snails. He seems to have taken great pains to clean, identify and arrange the finest live-caught specimens. He was also interested in the biology of the living animals. This is clear from the paintings of zonitoids he made for J. W. Taylor’s famous Monograph of the Land and Freshwater Mollusca of the British Isles (1894-1921), grouped together in a plate that Taylor rightly referred to as “exquisite”. The plate appears as Plate II in Monograph… vol. 3, facing p.16, so its publication date would be about 1915. Although almost all the other illustrations in the Monograph are by Taylor himself, he seems to have sought Dean’s artistic advice on other occasions (Monograph vol. 3, p.vi). That Dean, who in a previous profession was a designer of stained glass (see his Obituary, 1937, J. Conch. 20: 338-339) should be called upon to portray the zonitoid “glass snails” is somehow appropriate.

All of the then-recognised British and Irish zonitoid taxa are illustrated, mainly from specimens from northern England where Dean grew up before moving to Cardiff in 1915. At least some of the specimens remain vouchered as shells in his collection. The paintings are so accurate that they are ideal for identifying those species that are arguably more distinctive alive than as shells. For instance, the black mantle of Oxychilus helveticus, the glossy shell of O. cellarius, and the orange mantle spot of Zonitoides nitidus are clearly visible. As the original Monograph volume is a rare and expensive book, of the sort that should never be exposed to the same habitats as living snails, I thought it would be worth giving the pictures a second, and hopefully wider, distribution.

All the paintings are larger than actual size, with the original plate in the Monograph measuring 191 x 121mm. I hope Dean would forgive me for enlarging it again here, which makes the text and some of the details easier to see, and removing the margins. The various enlargement factors (x3, x8 etc.) are now inaccurate, but I have digitally copied each species to show it at approximately actual size on the right. Otherwise it is a faithful reproduction. The sizes given in millimetres are shell widths from Cameron’s Keys… (2003) and/or Kerney & Cameron’s Field Guide… (1979). The names are updated to meet Anderson’s Checklist… (2005) using the synonymies given in Kerney & Cameron (see following table). Please be warned, however: not all of these snails can be identified on living appearance alone. Cameron’s keys are recommended for further assistance on dealing with the shells.

A few comments on the taxa are warranted. Although the plate shows the familiar “Zonitidae” of recent memory, the taxa now represent five different families, with the Zonitidae sensu stricto no longer recognised in the British Isles. The species Vitrea crystallina and Euconulus fulvus have been split in western Europe and close examination of shells is required. Absent from the plate is Phenacolimax major, which was unrecognised in Britain at the time. Dean later painted this species for A. E. Boycott’s paper on P. major, although it appears only in black and white (1927, Proc. Malac. Soc. 17: 141-148). I have included Dean’s painting as no. 14, but some good colour photographs of P. major have appeared in previous issues of Mollusc World (e.g. no. 14, July 2007).

While working in Cardiff, Dean wrote several papers on the land-snails of South Wales. Reading through these it seems that some zonitioid species (whose identity is confirmed by his collection) have changed in their distribution and abundance, at least as far as my collecting experience suggests. In 1923 (J. Conch. 17: 57-60) Dean noted the “wonderful abundance” of O. draparnaudi and the “extraordinary scarcity” of O. cellarius on both sides of the Bristol Channel. O. draparnaudi is indeed common in disturbed habitats (I used to watch it killing and eating Hygromia cinctella in my Cardiff garden) but O. cellarius probably equally so. Thus O. cellarius can hardly be called scarce, although it it is usually outnumbered in the woods of Glamorgan by a third species, the probably introduced O. n. helveticus, by a factor of about five to one. In 1928 Dean wrote (Trans. Cardiff Naturalists’ Soc. 59: 59-75) that O. n. helveticus was “probably common in the wooded districts towards the Brecon border [of Glamorgan]” and cited just three other records. Unlike O. cellarius, O. n. helveticus did not feature in Dean’s list of woodland fauna in his section of the Glamorgan County History (1936, Vol. 1: 391-400) although it was still on his county list. Remarkably, O. n. helveticus seems to be absent from Dean’s collection. By contrast, this species is common or abundant in all the woodlands I have looked in around Cardiff, Taffs Well and the Vale of Glamorgan. This suggests the population has been both growing and spreading since the 1930s.

Should the spread of the central European O. n. helveticus have been noticed by Dean himself, it is highly likely he would have mentioned it. He was clearly an advocate of the biogeographical theories of his friend J. W. Taylor, as indicated by his Glamorgan County History piece. Here, one or more “dominant” species was given for each type of habitat (e.g. “ Dry Oak-Birch Woods without Ash”), followed by a list of associated species that judging by Dean’s introduction was supposed to be competitively inferior. Taylor’s Monograph… is full of such polarisations: of Hyalinia cellaria var. compacta (which appears among Dean’s paintings) he says “its discontinuous northerly and westerly distribution in this country stamp this as one of the weaker races which will eventually be exterminated” (vol. 3, p.37). Var. compacta is no longer conventionally recognised, but that its distribution indicated its competitive inferiority is biologically dubious. The O. cellarius I have seen in South Wales resemble var. compacta in shell shape and, thanks to Dean’s pictures, body colour, as do many of the O. cellarius in his collection, But Dean’s Glamorgan County History entry gives other evidence of Taylor’s influence. On p.393, he says:

“All European snails fall principally into two groups, Celtic and Teutonic. The Celtic species are the more primitive snails which have been gradually driven westward before the later-evolved more highly organised Teutonic races. Apart from these there is a Lusitanian or south-western species, Geomalacus maculosus, confined in the British Isles to the south-west of Ireland, while a small number of species are circumpolar in their range. Welsh species are pre-eminently Celtic. In Glamorgan we have a composite fauna, largely Celtic, but with an admixture of Teutonic species, some of which are not found in any other Welsh County”.

Being an admirer of Dean’s work I was a little dismayed to read this. There is no escaping the similarity to Taylor’s own theories of “Dominance in Nature” – or “Pan- Germanism” as it was summed up by two of his contemporaries – from which Taylor drew explicitly racist conclusions for humans and which found few adherents in his own lifetime (see Cameron, 1995, Archives of Natural History 22: 371-384). Unlike Taylor, Dean may not have meant to imply any relationship with anthropology or ethnology, and the mention of Lusitanian and circumpolar elements in the fauna may be a concession to other, more pluralistic viewpoints. These simplistic divisions could simply be made for the sake of brevity. However, his choice of words is so close to Taylor’s expositions elsewhere it seems Dean was not trying to set his views apart from those of his late friend (Taylor died in 1931). Dean must have been convinced by Taylor’s evidence of “higher organisation” of Teutonic species relative to the “primitive” Celtic ones.

Whether this also related to his personal politics, as it did in Taylor’s case, is not clear. Did Dean, I wonder, equate “Celtic” with “Welsh” and “Teutonic” with “English” identities in everyday life? A general negativity about Welshness among the British was common enough until recently, but as an employee of the National Museum and a resident of Cardiff, Dean must have been sensitive to the issue. I like to think he was trying to be dispassionate and objective in dealing with the fauna (indeed he was right to suggest that Glamorgan had many species not found elsewhere in Wales, regardless of the coincidence that it was also the most politically cosmopolitan county) and that he simply looked to Taylor’s work for background. How Taylor’s theories would have accommodated more recent changes in the British land-snail fauna, with so many European, Mediterranean and other species rapidly becoming widespread, we do not know. Thankfully, just as with Taylor, Dean’s careful collections and paintings have outlasted the shifting viewpoints of his day, and remain both beautiful and useful. 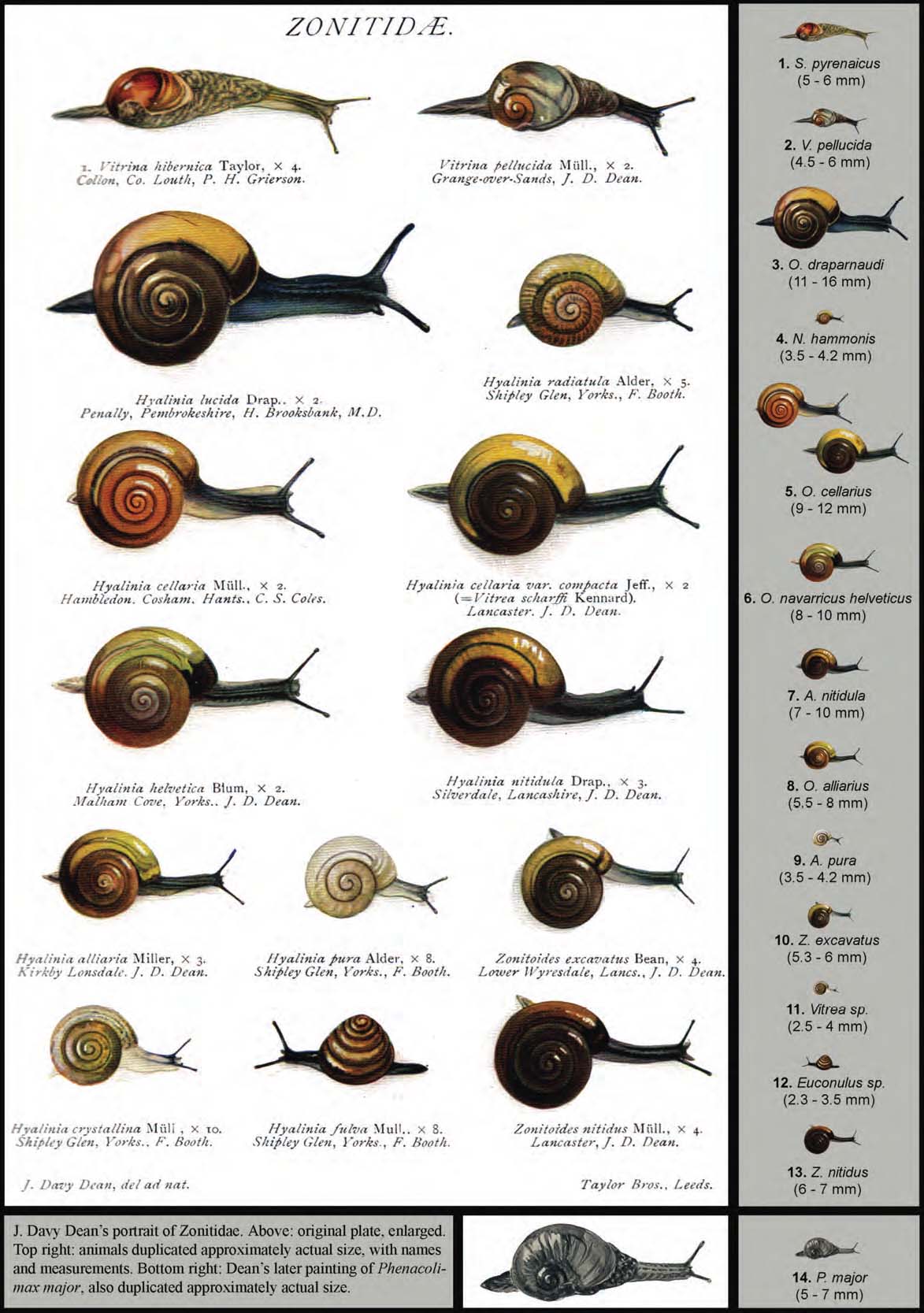