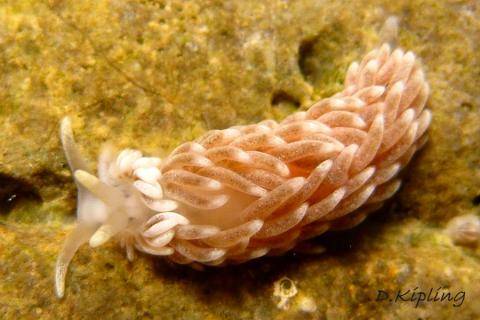 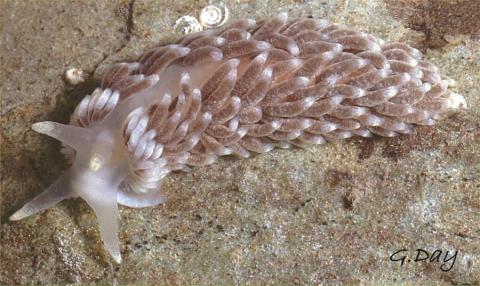 Caution:
There is uncertainty among experienced malacologists about the identification of Aeolidiella spp. Recorders are advised to take clear photographs of their finds for future reference. It is hoped that the situation may be clarified by examination of radulae and DNA sequencing in the future.

Cerata
About 15 obliquely transverse rows on each side of the body, mobile, and often held to reveal anterior half of the dorsum. Usually translucent white, but sometimes tinted red or yellow, revealing internal digestive gland of some shade of brown, varying with diet. Whitish cnidosacs partly obscured by white surface pigment at tips, but anterior group has unusually large cnidosacs occupying distal half, or more, forming a white ruff [3]. Rest of ceras has very faint traces of surface pigment. On red or yellow specimens, the surface pigment may be yellow.

Head
Coloured as body. Eyes visible [2]. Oral tentacles with white distal pigment [2], or yellow pigment if body red or yellow. Space between oral tentacles about same as thickness of base [2].

Foot
Translucent white. Anterior expanded into short triangular propodial tentacles which continue the curve of the foot (not counter-curved) [1].

Mediterranean to Britain, frequent in Portugal (GBIF map). Uncertainty because of confusion with other Aeolidiella spp. Most records in GB & Ireland from Ireland and south coast of England (UK interactive distribution map). 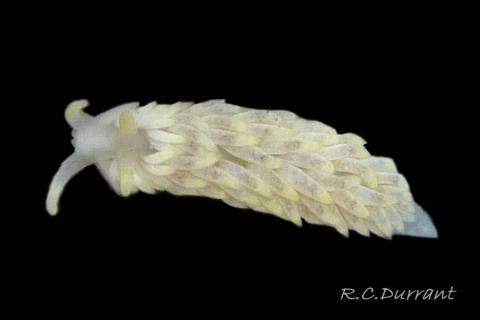 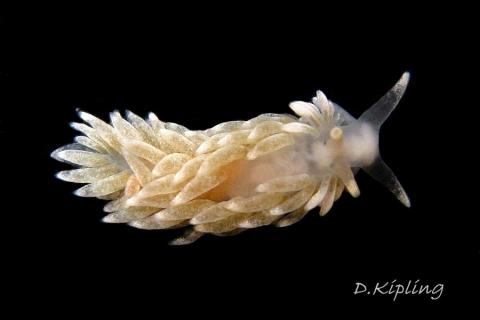