By June Chatfield and Ben Rowson 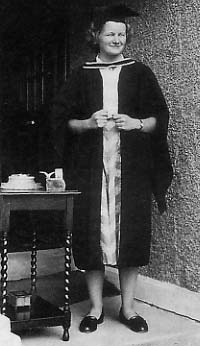 Born in Southampton, Hazel was awarded a BSc in Zoology from the University of London in 1954 (Fig. 1). Her 1957 MSc thesis, "Some aspects of hibernation in Helix aspersa", was a study of enzyme activity at the University of Reading under the supervision of Prof. Alastair Graham, who was interested in molluscan matters well beyond biochemistry. After this, Hazel took a Certificate of Education at Cambridge and became a biology teacher in Croydon and Wolverhampton, before a British Council appointment to Sri Lanka (1972-1975) and a spell as Head of Science at Fort Pitt School for Girls in Chatham, Kent. Her next 13 years (1975-1988) were spent at the University of Malawi as a Reader in Biology (Education) at Chancellor College, Zomba, which was to prove excellent opportunity for further work on snails.

At Zomba, Hazel's main duties included teacher training, school textbook and examinations work, but also plant and vertebrate surveys (Morgan-Davies et al., 1984). By 1977, Hazel had begun a major endeavour on the terrestrial molluscs of Malawi, a rich fauna that had attracted little attention since the time of E. A. Smith (1847-1916). From the beginning, Hazel inspired students and other residents of Malawi to investigate and collect snails. She established well-labelled reference collections at Chancellor College and at the Department of National Parks and Wildlife in Lilongwe, who with the Department of Forestry annually renewed her research permits. Unfortunately, these collections later fell into neglect (A. C. van Bruggen, pers. comm.)

For further detail on Malawian molluscs, Hazel corresponded with numerous specialists abroad including W. Adam, D. Aiken, G. Barker, E. Binder, D. Kilburn, A. Mead, P. Mordan, T. Pain, W. Sirgel, G. A. Solem, J. W. Thomé, J. L. Goethem and B. Verdcourt. None, however was more important than A. C. (Dolf) van Bruggen at the Rijksmuseum van Natuurlijke Historie (RMNH / Naturalis), Leiden, who Peter Mordan encouraged her to write to. This she did in 1979, and was to remain in regular contact with Dolf and his wife for the rest of her life. When she was able to spend a sabbatical term at Leiden, Hazel could work through her collections and the literature. This resulted in both the first annotated and indexed terrestrial mollusc list for Malawi (Meredith, 1983a), and an accessible, illustrated introduction to the fauna for use in Malawi (Meredith, 1983b). The biogeographical implications were expanded upon in a book chapter (van Bruggen & Meredith, 1984). Hazel was also able to track down the Malawi molluscs collected by the famous Arthur  Loveridgs when visiting the Museum of Comparative Zoology, Harvard (van Bruggen, 1993). The bulk of Hazel's collection, forming the basis of her work and many other studies by Dolf (e.g. van Bruggen, 2008) are deposited in RMNH, with some of her Achatinidae and archive material at the National Museum of Wales, Cardiff (NMW). Among the shells in RMNH are the holotypes of Fauxulus grayi van Bruggen & Meredith, 1983, a snail named after W. Noel Gray, Hazel's collaborator from the Department of Surveys, and three eponymous species. These are Chondrocyclus meredithae van Bruggen, 1983 (Cyclophoridae), Gulella rneredithae van Bruggen, 2000 (Streptaxidae) and Neomaizania coryli van Bruggen, 1985 (Maizaniidae); the latter name being derived from corylus, the Latin term for hazel (van Bruggen, 1985).

Hazel’s data and record-keeping were meticulous, and hold their value. A manuscript on climbing snails and their shells never saw publication, but evidently had the interest of Solem and others. She was always willing to comment on drafts of Dolf’s publications and data labels, and unpublished observations of hers were essential to his review of the molluscs of Malawi’s greatest mountain, Mount Mulanje (van Bruggen, 2007).

Following her return from Africa, Hazel settled on the East Pentire headland of Newquay, Cornwall where her parents’ bungalow, Salthaven, faced the bracing Atlantic. This took her out of the orbit for many London meetings. One of us (JC) first met her when she attended a non-marine mollusc course at the Leonard Wills Field Centre, Nettlecombe Court in Somerset in the late 1990s. She took an active interest in non-marine molluscs of Cornwall and was a co­-author of the county Atlas (Turk et al., 2001) as well as a paper on the spread of the sandhill snail Theba pisana in Cornwall (Meredith, 1994; 1995). The archive at NMW includes reprint requests for the 1994 paper from many countries where the species is introduced. During a visit to north Cornwall she and JC found and photographed a large number of predated shells of hibernating Cornu aspersum (Chatfield, 2000).

Being active in recording snails and plants in Cornwall, Hazel was a close friend of Stella Turk, former Conch. Soc. Marine Recorder and past President and Rose Murphy, Cornish botanist and retired biology teacher. Hazel kindly collected the correspondence between Stella and Nora McMilan for JC to borrow and extract notes for an article in Mollusc World (Chatfield 2014). Hazel was also active in recording plants for the Cornish flora for some 20 years, especially around the nearby West Pentire headland where she was happy to guide groups. One of the tiny rare botanical treasures she found was the Red Data Book Corn Salad Valerianella eriocarpa, in the gutter in Riverside Avenue. Hazel explained that when the council were spraying for weeds, she protected the plant by parking her car over it!

When Hazel suffered the increasingly debilitating effects of a previous stroke, she started to disperse her books and collections. The bulk of her African collection, record cards and correspondence with Dolf van Bruggen are at RMNH, while some of her Achatinidae, mollusc photographs and other correspondence are at NMW.