Extracted from Journal of Conchology, Volume 27, pp.523–526
About 1920 Stelfox, Phillips and Oldham planned to write jointly a monograph on the British species of Pisidium which, for various reasons, never materialised. Stelfox wrote a Preface to the projected monograph and some years ago he gave me permission to use this as I wished. As it throws light upon his early struggles with the genus and upon the study of Pisidium in general it is here printed just as he left it. [N. F. McMillan] 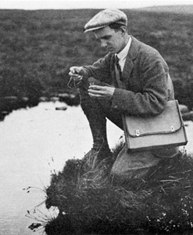 In my schooldays I have vivid recollections of collecting mollusca with men who are mostly now beyond the grave; indeed it has always been my lot to have as my closest friends men who were much older than myself, so as I grew up I was constantly losing their companionship. There are but two exceptions to the age of my friends and it is to one of these – my wife – and to the memory of the other – my little daughter – that I desire to dedicate this MS. To the former I owe gratitude inexpressible for patient encouragement in my work and to the latter during the brief time that her companionship was given to me I owe the inspiration which assisted me through the two critical years when I was just beginning to see light in regard to the specific limits of the Pisidia. It is to the late G. W. Chaster, I think, that I owe my original interest in this group. In 1905 he and I spent almost three weeks alone together in N.W. Donegal, during which I received much enlightenment on the subject of our mutual interest. At that time Dr. Chaster did not pretend to know the Pisidia, but I have a distinct recollection that on parting that year there was an understanding that "some day when we had more time" we would look into the matter. That some day for him never came for he died in harness almost on the eve of a visit to Kerry five years later and it was not until I was married and went to live in the country that I had time to do any work at the Pisidia, just after the outbreak of war in 1914. But during those nine years I collected mollusca very extensively in all the counties of Ireland, except Tipperary; in the S.E. of England, as well as in Cornwall and odd localities in many parts of that country; in the Orkneys; in Norway; and in Normandy. Wherever and whenever I had an opportunity I brought home Pisidia, always with the idea that "some day" I would tackle them. On some occasions my specimens were named by various conchologists for purposes of recording, but the vast majority of these shells in my collection remained unexamined until after 1914.

I can well remember collecting my first Pisidium. It was in a ditch in fields now long since built over by the extension of Belfast – but I still have the specimen – P. casertanum – and the Aplecta hypnorum that I collected with it. In those days Mr. Robert J. Welch was my only guide and friend and we kept a careful log of all our captures. It was then our custom to record our Pisidia as either "P. amnicum", "P. pusillum" or "P.sp ?". P. amnicum we did not often see, as our collecting was mostly done in areas beyond its range. "P. pusillum" we recorded without scruple as we thought it could do no harm, since the species was supposed to be ubiquitous. The other species we never dared to name.

It was with great joy, therefore, that when collecting near Sligo in September 1900, I heard Mr. Robert Standen name a Pisidium which we had found in an old limestone quarry. He said it was "P. roseum" (i.e. P. milium of course) and from that day I named P. milium with fair success. Also if a specimen was very inequilateral we could sometimes venture to call it "P. fontinale"; or if it was very clean and glossy it was "P. nitidum". About this time, 1898–1905, much of our material was sent to Mr. Charles Oldham whose naming was wonderfully consistent when we consider that he was trying to put ten or twelve species into five rather ill-defined forms. Not till the Clare Island Survey was started in 1909 and I had been asked to undertake the report on the L. and F.W. Mollusca did the problems of the Pisidia really assert themselves. During the survey I made many collections on oecological lines, which afterwards proved of the utmost value. I was saved, however, from floundering into the unknown, by learning that Mr. B. B. Woodward was writing a monograph on the British Pisidia and I was led to understand that he would be glad to see Irish material – though I have since discovered that I was mistaken on the latter point. Mr. Woodward being willing to name my Pisidia I naturally placed my Clare Island collections at his disposal, as it relieved me of the responsibility of trying to identify them – a task which I knew well I could not rightly undertake.

In conclusion I say that I have no doubt that in time to come many "species" will be added to the British list but I cannot avoid hoping that breeding experiments may eventually prove that the species herein recognised are really species in the generally accepted meaning of the word and not composite agglomerations of diverse forms. If I may offer a suggestion to future workers, go in for breeding! Take a plastic species like P. casertanum from a standard locality where it is fairly constant and breed its progeny for a number of generations under different environments and see what happens!