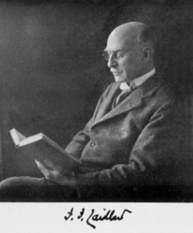 Frank Fortescue Laidlaw was born at Galashiels on 1 February 1876 and died in his sleep on 11 December 1963. He spent his childhood at Guildford and was educated at Uppingham, from where he went to Trinity College, Cambridge, and took a “double first” in Zoology. In 1899 he joined the Cambridge University Expedition to Malaya, under the leadership of W. W. Skeat, returning to England in the following year. He was then appointed Lecturer and Assistant Demonstrator in Zoology at Owen’s College, Manchester. In 1903 he turned to the study of medicine and qualified M.R.C.S. and L.R.C.P. from St. Bartholomew’s Hospital, London, in 1909. In 1911 he took a practice at Uffculme, Devon, where he remained, except for three years in the R.A.M.C. in the first World War, until his retirement in 1945. Shortly after taking up his practice he married Maud Wright. who, together with their son and two daughters, survives him. After his retirement Laidlaw lived successively at Woodham Mortimer. Essex, St. Lawrence, Isle of Wight, and Foxearth, Suffolk.

From early childhood Laidlaw’s interests were many, but natural history was his first love and he was equally at home in botany and zoology. His participation in the Skeat Expedition gave him scope for his varied talents as student and field collector, for he was obliged to cover several widely different groups of animals. Many years later he wrote a reminiscent account of his experiences on this expedition (Travels in Kelantan, Trengganu and Upper Perak, a personal narrative. J. Malayan Br. Asiat. Soc. 26, part 4: 148–164 (1953)). The Malayan adventure made a deep impression on him and was the origin of his lifelong interest in the natural history of the region. He reported on the dragonflies, marine turbellarians, amphibians and reptiles collected on the expedition. The systematics of dragonflies and polyclad fiatworms was advanced considerably by his studies and he maintained a keen interest in these groups all his life.

Laidlaw left the reports on Mollusca to others who were then interested in the molluscan fauna of that region, chief among them E. R. Sykes and W. E. Collinge. Nearly thirty years later he published a list of the non-marine Mollusca of the Malay Peninsula (1928). His interest in Mollusca was not a later development, however, for he was elected a member of the Conchological Society in 1900 and published his first malacological note in the Journal of Conchology in 1908. Except for this note and one on the land shells of Lugano (1929a), the outcome of a holiday spent there, the rest of his papers on Mollusca dealt exclusively with the non-marine fauna of the Malay Archipelago. Although his published output was not large it was sound and revealed the quality of the keen intellect which he brought to bear on all scientific problems. His early studies on the Ariophantidae (1932b, 1938), the Dyakiinae (1931c) and the anomalous slug Atopos (1940a) are particularly impressive. He described a number of new species and subspecies and proposed several new genera.

Laidlaw’s favourite molluscan genus was undoubtedly Amphidromus. The beauty and variety of the colours exhibited by the many species of this genus had always exercised a strong fascination over him and through the years he had gathered together a large collection of them. It was not until after he had sold this collection to the Chicago Natural History Museum that he decided to write a comprehensive account of the genus in which he could present his ideas on the relationships of its component species, their specific boundaries and their evolution. As his advanced age did not allow him to complete this work himself, it is fortunate that he had the able asistance of Dr. Alan Solem of the Chicago Natural History Museum. Together they published a large “Synoptic Catalogue” of the genus Amphidromus (1961) (reviewed in this Journal, 25: 87). The publication of this work on Dr. and Mrs. Laidlaws’ golden wedding day was thoughtfully arranged by Dr. Solem and gave them unique pleasure.

It may be pointed out that between 1911 and 1945 all his researches on natural history were done during such spare time as he could find from his work as a general practitioner. Recognized by his professional colleagues as a man of high ability, to his patients he was known for his outstanding kindness, humanity and good humour, and he played a full part in the life of the parish in which he lived.

Laidlaw was an expert on the flora of Ben Lawers, which he had climbed about fifty times, often carrying a full-plate camera weighing over twenty pounds. He was the first to discover the wintergreen (Pyrola minor) in Devon and, after his retirement, he rediscovered the Isle of Wight Helleborine (Epipactis vectensis) which had not been reported from the island since its first discovery in 1917. He was a member of the Malacological Society of London, the Royal Entomological Society and the Zoological Society of London. For his services to Malayan natural history he was elected a corresponding member of the Malayan Branch of the Royal Asiatic Society in 1920. The accompanying photograph, taken about 30 years ago, he considered was a good likeness, but it conveys little of his inner character. Helpful, modest, gentle and completely unprejudiced in thought and deed, he made a charming companion, an entertaining conversationalist and a delightful correspondent. I am most grateful to Dr. E. F. Laidlaw for supplying much information about his father.