Extracted from Conchological Society of Great Britain and Ireland, Special Publication 1, “Marine Mollusca described by John Gwyn Jeffreys, with the location of the type material”, pp.2–4, by Anders Warén. 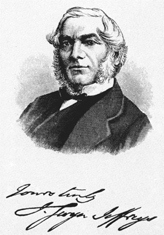 John Gwyn Jeffreys was born on 18 January, 1809 at Swansea, South Wales, and spent most of his life there. He went to school there and one of his teachers was John Dillwyn, well known among malacologists for his “Catalogue of shells”, 1817. When he had finished school, Jeffreys started at a lawyer’s office, a profession he kept and developed until he retired in 1866 to spend all his energy on the study of molluscs and some engagements in society.

Unlike most collectors of that time, Jeffreys collected most of his material himself, and in this way he gained much knowledge not only about the shells of molluscs, but also on their habitats and biology. Good proof of this may be found in all his descriptions of the soft parts, not only in “British Conchology”, but also in the reports from the expeditions in which he took part.

His first papers dealt exclusively with pulmonates, but later he turned his attention more and more to the marine species of shell bearing molluscs. He seems to have been especially interested in pyramidellids and rissoids, to judge from the amount of material of these groups from other conchologists present in his collection.

As mentioned above, Jeffreys collected most of his specimens himself. This was first done from a rowing boat, and later from a yacht he bought for this purpose, the Osprey, and from boats belonging to friends. In this way he did a lot of dredging around the Shetland Islands, an area he found especially interesting. These dredgings were made in company with other naturalists such as J. T. Marshall, A. M. Norman, W. C. McIntosh and E. Waller. He also collected in other areas of Great Britain and Ireland and took part in the work of the committees of the British Association for the Advancement of Science, appointed to investigate the fauna of the British Isles.

The most well known of his journeys to foreign countries is certainly that to the area between Nice and Genova in 1855, where he collected much material, especially of small species. He published a report on this journey, (Jeffreys, 1856a,b) where he described ten new species, but the great advance provided by this list for Mediterranean malacology was not the new species, but the synonymy. It was translated into Italian by Capellini, 1860.

Jeffreys also made collecting trips to the United States in 1871, where he dredged together with Baird, and to Norway, in 1870 and 1879, where he dredged with G. O. Sars and Friele. Reports of the last two trips can be found in Jeffreys, 1870b and Norman, 1879.

Encouraged by his own results from the Shetland dredgings, which had been done successfully down to depths of about 200 m, Jeffreys was one of the initiating forces behind the first British deep-sea expeditions, together with Wyville Thomson and W. B. Carpenter. He took part in the Porcupine expeditions 1869 and 1870 as scientific leader. Later, in 1875, he did the same in the Valorous expedition to Greenland, and in 1880 he took part in the French Travailleur expedition, under the direction of Milne-Edwards.

Jeffreys acquired another, taxonomically important part of his collection by purchase of other collections. In that way he obtained the collections of Clark (including the collection of Turton and material of Montagu) and Weinkauff.

Jeffreys also visited most of the well known European malacologists of his time, and corresponded with almost every European malacologist. His relationship with G. 0. Sars seems to have been especially good, but he was also on good terms with many others, and Friele, Fischer, de Folin, Monterosato, Seguenza and Watson are among his most often cited correspondents. By exchange from these authors, he obtained material of most of the species they described. They also often sent him material before they described a species, to get his opinion. Therefore there are lots of syntypes of these authors in his collection. Sometimes these syntypes are the only remaining ones, e.g. for the species described by Seguenza. In a second appendix [NOT included in this website version], I give the names of those authors of which I have found possible syntypes in the Jeffreys collection.

It may also be noted, however, that during his last years, Jeffreys did not take very much notice of what was done by Monterosato. He almost never referred to Monterosato’s papers, and a great number of species were independently described as different species by these two outstanding men in European conchology.

Jeffreys’ greatest contribution to malacology was certainly his understanding of variation in littoral species and coordination of Mediterranean and Atlantic conchology. He was the first one to make careful comparisons with good material from both these areas, and in this way he contributed to a better understanding of the distribution of the species. In the same way he studied and compared the fauna of North America with the European fauna. He also contributed much to Forbes and Hanley’s "British Mollusca", and I think that it was due to his influence that that book brought about a great change for the better in the history of European conchology.

I must, however, point out some of his weak points, as this may contribute to an understanding of his work, and also his mistakes. One of Jeffreys’ favourite theories was that the present bathyal fauna was partly the same as had inhabited European seas during the latter half of the Tertiaries. Therefore he very often identified species taken by the deep-sea expeditions with Tertiary fossils, especially from Sicily and the British Crag formations. This approach seems to have been wrong much more often than it was right. It is true that many Pliocene and Pleistocene fossils from Italy still occur in the Mediterranean, and perhaps still more often in West Africa, and also that many Crag fossils still occur alive, but when recent forms are identified with Miocene species it is more dangerous. One contributing factor to this view was that Jeffreys never believed in the theories of Darwin.

Even if Jeffreys’ understanding of variation in some groups, e.g. the genera Rissoa and Buccinum, was an advantage in dealing with many shallow water groups, he could never understand that variation could be less and the species more uniform and resembling each other in other groups, e.g. Alvania and the Eulimidae. During his later years, he also often described new species from very poor specimens and sometimes from fragments of less than one quarter of a shell. It might seem to us nowadays that Jeffreys’ new names and his concept of nomenclature has caused a lot of unnecessary trouble, but this in large part results from the fact that the rules of nomenclature at that time were very different from now.

A number of years before he died, Jeffreys offered his collection for sale to the British Museum for a very low price, but they were not interested. Later, W. H. Dall, from the USNM bought it and sold it soon afterwards to the USNM for the same price, £1050. Not included in this purchase were some types of species described before 1856 and some types described in the paper on Piedmontese molluscs. Jeffreys had also given some specimens of the species from the Valorous expedition to the BMNH in 1877. In 1885, after the death of Jeffreys, the BMNH received material of all the species taken by the Lightning, Porcupine and Triton expeditions. However, most of the material of these expeditions went to the USNM. Evidently Jeffreys had put material aside of every species for the BMNH and that is what was given to the BMNH. It is not at all to be understood, that these BMNH lots are to be considered types, but rather that the material in both museums should be considered of equal status.

When the collection came to the USNM it remained packed up for about twenty years, with a few exceptions of specimens which were picked out by Dall, Verrill and Bush for study. But this was only occasionally, and mostly, in their papers, they refer American specimens to the species of Jeffreys without having seen his material. Most of the collection was unpacked and catalogued around 1903.

The condition of the material is very good and usually there have not been problems with relocating a certain specimen. When the material was catalogued, it was transferred from the small paper-boxes in which Jeffreys kept his specimens into glass vials of good, non acidic quality, so almost no specimens have been damaged due to that reason, which in other collections has sometimes caused severe damage. At first Jeffreys’ collection was kept apart from the general collection, but it was recently incorporated.

There have been more difficulties with locating the material in the BMNH, evidently due to the fact that the material there was kept in paper-boxes, without protecting glass tubes for some time after being received. The result of this lack of protection is that often black slips of paper were found without remains of a shell glued on them. (Jeffreys often glued his specimens on slips of paper, to be able to study them better.) Probably in these cases the specimen had been crushed by the labels of rather stiff paper which had been lying upon it.

One of the main problems with Jeffreys’ material is the poor labelling. All the specimens figured in British Conchology are in the USNM and labelled "figured in Brit. Conch." However, localities are never given for these specimens and sometimes I suspect the specimens to be extra-British. Much of the material from the Weinkauff collection has no locality and often it is not mentioned that it originates from that collection. The same applies to material from other collections, too. His own material is also usually only labelled "Shetland", "Hebrides", "Guernsey", etc., which makes it more difficult to locate types. The material from the Porcupine expeditions is also labelled in a confusing manner. Very often not only did he write the station no. of the station from which the specimens originated, but a number of stations are given, perhaps all the stations from which he knew the species as Sykes suggested, (1904, p. 23), but more probably, I believe, that Jeffreys put specimens from a number of stations together in order to save boxes. Later on, perhaps he picked out specimens for the BMNH, or for other purposes, and that might explain why sometimes five localities can be mentioned on a sample containing a single specimen.

Other difficulties in recognizing his varieties are that he almost never labelled them with the varietal name, but only the name of the species, and sometimes a different varietal name can be found on the label of what apparently is the type specimen of a variety described in British Conchology.