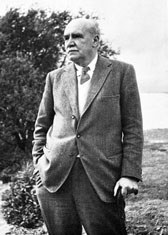 Captain Cyril Diver, C.B., C.B.E., died on Monday February 17th 1969, aged 76. Cyril Diver was born in 1892, the son of Lt. Col. C. Diver and Maud Diver the novelist and writer on British India. Educated at Dover College and Trinity College, Oxford, he served in France during World War I. Professionally he was Clerk of Committees at the House of Commons. In 1948 he was appointed to be the first Director-General of the Nature Conservancy, but though he had a distinguished career his greatest interest lay in the field of natural history, especially in molluscan ecology and genetics. By kind permission of Sir Julian Huxley we reprint his tribute to Captain Diver, published in The Times of 28 February 1969, and follow it with an appreciation by Professor A. J. Cain.

Extracted from Journal of Conchology, Volume 27, pp.422
In addition to his published papers on Studland Heath peninsula (listed on p. 276) Diver had completed, just before his death, three long papers dealing further with the area but considered too long for publication. These form parts of the Studland Heath Peninsular Survey and are as follows: VII, Syrphidae (Diptera); VIII, Mollusca; IX, Fires and Habitat Recovery.
All are in typescript (bound) and are held at the Nature Conservancy's headquarters at 19 Belgrave Square, London S.W.1.
I am indebted to Mrs. Diver for drawing my attention to these MS. papers.

When I was invited in 1945 by the Minister of Town and Country Planning to get together a Wild Life Conservation Special Committee for England and Wales to make proposals for the conservation of nature, Cyril Diver was naturally one of those to whom I looked for aid. Although professionally a clerk in the service of Parliament, he never disguised the fact that his first allegiance was to nature, and his remarkable personal survey of Studland had distinguished him as an outstanding ecologist.

On the committee, which made up a first-class team, he soon distinguished himself by his passion for thoroughness, his almost inexhaustible appetite for work between sessions, and his readiness to take away a tangle of facts and opinion and to bring back a cogently stated and usually acceptable draft. As every chairman knows, such men are rare. Although his fellow-members made valuable contributions, I believe they would agree that Cyril Diver’s dedicated perseverance and his talent for drafting and revision were decisive in producing the memorable Command Paper 7122, which was adopted virtually en bloc by the Government and by Parliament in setting up the Nature Conservancy, of which he became the first Director-General laying the guide-lines for future policy.

As an old friend and colleague, may I be allowed thus briefly to record a public service for which many people have cause to be deeply grateful.

An appreciation of Captain Cyril Diver

By Professor A. J. Cain

I met Captain Cyril Diver, a few years after the war, in London at meetings of the Council of the Systematics Association, of which he was one of the founders. It had been started so that people deeply interested in modern population genetics, ecology and taxonomy could have meetings and discussions – a highly desirable object, and hardly attainable within the Linnean Society in those days. One of its first fruits was the excellent volume The New Systematics (1940) edited by Julian Huxley, the profits from which went to the Systematics Association. Diver impressed me immediately both by his outstanding personality (vigorous and, to use that sadly dilapidated word, genial) and his extreme efficiency in conducting meetings. He was immediately interested to hear of the work Philip Sheppard and I had started on Cepaea and disagreed sharply with our conclusions. We had several verbal fights about it, which we both thoroughly enjoyed and knew the other was enjoying; his trump card was always the remark "Go to Bundoran. Until you’ve seen the variation there, you haven’t seen much of Cepaea." He was always firm that it was completely random, non-adaptive, and correlated with no feature of the local environment. He was widely and rightly regarded as the best living authority on variation in snails. I had already read with respect his paper in The New Systematics on closely related species in the same area, and when I started to study his other work, it was clear that his reputation was fully justified. His superb presidential address to the Conchological Society on 15 Oct. 1938 on Aspects of the study of variation in snails (published March 1939) can still be read with both profit and pleasure, and many years later it impressed some of my pupils with a vivid sense of Diver’s great capacity. He was one of the principals, with Boycott, in the classic work on the inheritance of sinistrality in Limnaea which appeared in various papers from 1923 to 1938. He was perhaps the first to appreciate the importance to geneticists of fossil records of genetic variation (in Cepaea, Nature 1929). He was certainly one of the first to realise the immense importance of virtually inch-by-inch mapping of the plant carpet in surveys of the distribution of animals, and it is very sad that the results of the Studland survey, begun in 1932, were never published. (I shudder to think what he would have said of some so-called surveys purporting to be ecological, published long after his work in reputable journals). At least as important was his realization (following Boycott and Alkins) of the importance of the random sample. It is difficult to know who among that outstanding group of conchologists Boycott, Diver, Oldham and Stelfox, started any particular idea first; but Diver’s brilliant advocacy of the random sample to conchologists still very much wedded to picking out cabinet specimens or named varieties, and the fact that he had already started collecting random samples of C. hortensis and nemoralis in 1920 suggests that it was as much his idea as anyone’s. His industry was fantastic. He and Boycott in 1924 collected from the Bundoran sand-dunes alone about 25,000 C. nemoralis; and in his New Systematics paper he mentions over 27,000 other C. nemoralis and nearly 25,000 hortensis, mainly from England. He drew the right conclusions from this mass of data and from his and Boycott’s magnificently detailed survey of Cepaea on the Berrow dunes – namely the extreme patchiness of distribution of these and most other animals, the considerable amount of inbreeding there must be, and the vast number of evolutionary units that a so-called widespread species is broken into, over even a small area of country. He was thoroughly up to date in his reading, his knowledge of the relevant genetics and ecology was excellent, his practical experience vast, and in short he had a grasp of the subject that many a professional student of evolution at that time might envy. In this he was helped by personal contact with some of the most distinguished evolutionists of his day; he was closely associated with Julian Huxley, he published with Sir Ronald Fisher on genetical crossing-over in Cepaea, and he saw the proofs of E. B. Ford’s celebrated paper on polymorphism in 1939. He was keenly critical of his own work, and this attitude, combined with the enormous masses of data that he collected, resulted in his publishing far less than he might have done with perfect propriety (not just for the sake of "getting papers published," an activity he would have hated and despised).

In one respect, he was the victim of his own outstanding qualities. In his surveys of Cepaea, as already said, he was a brilliant pioneer, collecting random samples carefully characterised according to habitat from all over England and adjacent countries, and scoring them with a knowledge of the genetics of the morphs included. When he put all his data together, he could find no association at all between habitat or geographical locality, and the occurrence or frequency of any particular variety. As his studies had shown him that these common species were divided up into numerous small colonies, either by actual uninhabited areas or by distance within an apparently continuous population, and as his detailed surveys at Berrow and Bundoran equally showed no correlation with any obvious features of the habitat, he very reasonably concluded that chance and Sewall Wright’s "genetic drift" had played the principal part in bringing about the differences between Cepaea colonies. And this was an infinitely more respectable conclusion than that reached since by various eminent geneticists who with no practical knowledge whatever of the Cepaea situation have concluded that the variation must be due to chance because they personally can’t see how it could be anything else. We know now that if he had restricted his collecting to smaller districts inland, he would have discovered either areas in which visual selection was operating, as many have found since in lowland Britain, or the extraordinary districts with comparative constancy of frequencies over large areas which cannot be due to chance, which Professor Currey and I have described as "area effects" and which are usual at higher altitudes in calcareous country. His excellent survey at Berrow was repeated 30 years later by Professors Bryan Clarke and J. J. Murray, who have shown there a constancy of the pattern of variation which does not allow that chance can play a large part in determining varietal frequencies. With characteristic generosity he handed over to them all his samples and notebooks for the Berrow work, and later added those from Bundoran, and a massive paper by Clarke, Diver and Murray (Proc. Roy. Soc. London B 253: 519–548) gives the results – again a general stability over many years inconsistent with chance. Diver contributed an appendix to this paper giving the history of his own interest in Cepaea, referring to earlier work, and reaffirming his own belief that chance events were of importance. What certainly can be said of his work in this respect is that even if he did not find an acceptable solution to the problem, it was as the result of his surveys that the problem was made precise and attackable by others; and as field workers know too well, it is often the definition of the problem which is the greatest triumph.