By Dr. Hans Schlesch; translated and abridged by R. Winckworth.

Extracted from Journal of Conchology, Volume 22, p.225–226
Image by courtesy of Wikimedia. 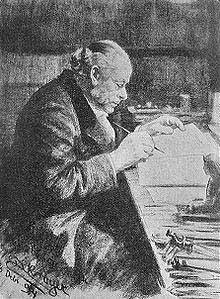 Bergh has a worldwide reputation for his work on nudibranchs: yet he was not a professional zoologist, but had a strenuous career in medicine and it is astonishing that he was able to do so much good work in both subjects.
Ludvig Sophus Rudolph Bergh was born in Copenhagen on 15th October, 1824, and died there on 29th July, 1909. He studied medicine at the Almindelig Hospital, where he became Oberarzt in 1863, a post he held for forty years. He specialized in venereal disease, on which he wrote more than fifty papers (1859–1908); nearly all of them published in Hospitalstidende, of which he was a co-editor from 1859 to 1865. On Bergh’s initiative and proposals a special hospital for the treatment af these cases was built, the Vestre Hospital, afterwards renamed Rudolph Bergh’s Hospital, which was a model for similar institutions through Europe.
Bergh began his work on mollusca when nearly thirty years old, probably under the influence of Japetus Steenstrup, with a treatise on Marseniaden, i.e. Lamellariidae, in Danish (1853). This was followed by a long series of papers on nudibranchs, at first in Danish; but by 1870 he realized that he must use a more widely read language and the rest of his work was written in German, or occasionally in English or French. He divided nudibranchs into Cladohepatica, characterized by the divided and usually branched liver (now the three suborders of Dendronotacea, Arminacea, and Eolidacea), and Holohepatica, in which the liver is a compact mass (now Doridacea). He also separated Elysia and its allies as a suborder Ascoglossa (1878), in which he was anticipated by von Jhering, who had called the same group Sacoglossa in 1876. His system of nudibranchs, in which the families and genera are defined and the species listed appeared in part 18 of Malacologische Untersuchungen in Semper’s Reisen im Archipel der Philippinen: it repeats three papers already published on Cladohepatica (Zool. Jb. 1890), cryptobranch Dorids (Zool. Jb. 1891) and Porostomata (Verh. z-b. Ges. Wien, 1892) with the phanerobranch Dorids added. His contributions to Semper’s Reisen form volumes 2, 7, and 9, and include material from all parts of the world; of the 2020 pages and 155 plates about three-fifths concerns nudibranchs, while volume 7 treats of pleurobranchs and other tectibranchs. Other important papers are the “Neue Nacktschnecke der Südsee” in J. Mus. Godeffroy (1873–9) and reports on the material from the Challenger (1884), Albatross (1894), and Siboga (1905) expeditions. There are about 90 other papers of his on mollusca in various journals: among them a useful account of the radulae of Conus (1896).
Bergh laid the foundations for further study in nudibranchs. His strength lay in his enormous capacity for work, his skill in dissection, his excellent drawings, and in his detailed knowledge of the literature; his genius is displayed in his System, an immense advance for his time. He rightly stressed the value of the nervous and genital anatomy in systematics, but frequently ignores important diagnostic points. Working on preserved material he was perforce an anatomist rather than a naturalist, though he eagerly sought drawings of and information about the living animals.
Bergh carried on his work to his last years, but heart trouble at last undermined his robust constitution. He received many honours including two Danish decorations (Rider of Dannebrog and Dannebrogsmand) and was elected to foreign membership of many scientific societies. Personally he was charming and kindhearted; always willing to give help on matters medical or molluscan, though sometimes displaying dignity and irony.
Bergh had only one son, Rudolph Sophus (1859–1924), a competent zoologist, who studied at Würzburg and Villefranche and became Dozent in histology and embryology at Copenhagen University and was the author of several textbooks. One of his papers is malacological, Ueber die Gefässwandung der Mollusken (Anat. Hefte, 1897). In 1902 he left the university and went to Germany to devote himself to music. He died at Davos.