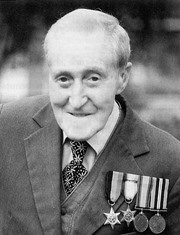 Born in Oldham, Lancashire on the 16th of September 1900. Educated at the Oldham School of Art, he became a designer and landscape painter. At the age of 14 he joined Oliver's of Manchester as a lithographic and illuminating artist. His first connection with the Conchological Society happened soon after this. The Conchological Society of Great Britain and Ireland commissioned an illuminated address from Oliver's and it was John who at the tender age of 14 years illustrated this manuscript. The address was presented to John William Taylor of Leeds on the occasion of his 70th birthday in recognition of outstanding work in connection with the study of British land and freshwater shells¹. This manuscript is now part of the collections held at the Leeds City Museums.

From a very young age John became a close friend and acquaintance of Fred Taylor who lived close by at 42, Lanseer Street, Oldham, and spent much of his informative years collecting and studying natural history under him.

In 1924 he became a full-time naturalist, photographer and lecturer, joining the Foyles Lecture Agency of 125, Charing Cross Road, London, W.C.2. This freedom allowed him to travel all over Europe, the near east and even took him to Jamaica in the West Indies. He also wrote for several local and national newspapers including the Daily Mirror, the Oldham Chronicle, under the pseudonym Moorcock, and in later years the Yorkshire Evening Post.

His early interests in Conchology, instilled into him by Fred Taylor, never left him and his extensive travels allowed him to build up an extensive British and European shell collection. John's own collection was also greatly enhanced after Fred's death when his widow allowed him to remove, in two large suitcases, most of the more important elements of Fred's collection. This extensive collection along with his field note-books and diaries and most of his photographs are now in the care of the Leeds City Museum.

John spent his wartime military service in the Royal Air Force as a photographer, and was based for a period near Kaldadarnes in Iceland. His molluscan studies at that time were published in 1964 as a joint paper with Nora F. McMillan.

As far as I can establish John was the only person ever to have found the slug Milax (Milax) nigricans (Philippi, 1836) in Britain. The specimens collected on waste ground near Bexhill, Sussex were confirmed by Mr Watson and published in Quick’s Monograph under the name Milax insularis (Leseona & Pollonera,1882)

In 1953 he applied for and was appointed as Keeper of Biology at the Leeds City Museum on the 2nd of November under the then Director Dr W.E. Owen. John Wilfred Jackson acting as one of his referees. John remained at the museum until his retirement on the 16th of September 1969, well after normal retirement age.

John died in his sleep in a nursing home in Leeds on the 5th of August 1996. He leaves a wife Mabel, two daughters, Helen and Heather and 4 grandchildren. He also leaves many friends and acquaintances who will always remember him.