Genus: GYRAULUS Charpentier, 1837
There are eight species recognised in northern Europe  but only four occur in Britain. All are smaller than 7 mm. and all are sinistrally wound in  more or less one plane. The spire is considerably intorted, lying below the level of the body whorl, whilst the true umbilicus is flat or even slightly convex. 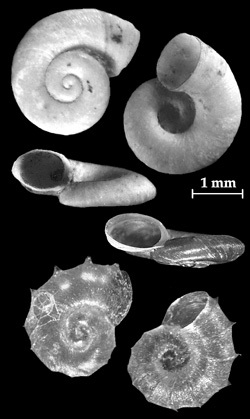 Gyraulus crista (Linnaeus, 1758)
Description: The shell is thin, not glossy, and horn coloured. The spire is extremely sunken, so much so that it would be thought to be a wide umbilicus if one did not realise that the shell is sinistrally wound. The true umbilicus is, in fact slightly raised! The shell bears strong transverse ridges at regular intervals. In the varieties nautileus, cristata and spinulosa the transverse ridges are produced into points at the periphery. These are of different lengths and spacing, according to the variety. The body whorl is bluntly angled below, and the mouth aperture is oval.
Size: Height: 1 mm. Breadth: less than 3 mm.
Habitat: It is common on the leaves of water plants throughout the British Isles.

Gyraulus albus (Müller, 1774)
Description: The shell is thin and a very light horn colour. It is covered by fine transverse striae, and, in addition, bears numerous, regular, spiral ridges of the periostracum. It is comprised of 4 – 5 rapidly expanding whorls, and the aperture is wide and oval. The spire lies below the level of the body whorl, and the true umbilicus is flat, only the very centre being depressed.
Size: Height: 1.5 – 2.5 mm. Breadth: 5 – 7 mm. (rarely larger)
Habitat: It is common amongst the leaves and stems of water plants throughout Britain, except in the extreme north of Scotland.

Gyraulus acronicus (Férussac, 1807)
Description: The shell has 3½ – 4 whorls, well-rounded above and slightly flattened beneath, with a waxy gloss. The periostracum is usually thickened at the periphery to form a ridge or kind of keel. The transverse striations are coarser than on G. albus, and there are no spiral striations or ridges. The body whorl is raised above the other whorls, and the lower (umbilical) surface is convex, except for the centre, where it is depressed. The aperture may be oval to circular.
Size: Height: 1.5 mm. Breadth: 5 – 7 mm.
Habitat: In Britain this snail is confined to tributaries of the R. Thames around Oxford and Windsor. The shells are fairly common in the River Cherwell in flood rubbish, but the snail is rarely collected alive. It is reported to prefer quiet backwaters with grassy margins and a muddy bottom.

Gyraulus laevis (Alder, 1838)
Description: The shell has 3 – 4 compact rounded whorls, which are more rounded and expand less rapidly than G. albus. It also lacks the spiral striations or ridging, the suture is deeper and the spire more depressed. The periphery is never angulated or keeled. The shell often bears an encrusting deposit. The aperture is almost circular.
Size: Height: 1.5 – 2 mm. Breadth: 5 – 6 mm.
Habitat: This is a local species occurring in a number of counties throughout Britain, and is possibly under-recorded, due to its small size. It occurs on water weeds in lakes and ponds, rarely in flowing water. It is considered to be a pioneer coloniser of gravel pits and similar habitats.