This family is represented in Europe by only one genus , Valvata.

These snails have a long snout with the mouth placed at the end, and long tentacles, with eyes at their base. The foot is divided at the front into two lobes by a characteristic deep cleft. There is a prominent plume-like gill which can be protruded from the mantle cavity, and the penis is permanently protruded in life. The operculum is thin, circular and marked in a spiral fashion.

Valvata macrostoma (Mörch, 1864)
Description: The shell is more depressed than V. piscinalis and is comprised of 3½ whorls. It is glossy and is about twice as broad as it is high. The umbilicus is wide and deep. The spire is only slightly raised, and the suture is deep. The aperture is fairly large and circular. Continental workers refer to it as V. pulchella Studer, 1820, whilst Germain (1931) treats it as a variety of V. piscinalis, a view with which British workers disagree.
Size: Height: 2 mm. Breadth: 3.5 – 4 mm.
Habitat: It is only found in "good" quality water in a few marsh drains in East Anglia, Hampshire and Sussex.

Valvata cristata Müller, 1774
Description: The shell is disk-like, thin and glossy, rather resembling a very small Planorbis but with an operculum. It has 3 whorls, with a deep suture. The mouth aperture is circular.
Size: Height: 1 – 1.25 mm. Breadth: 2 – 4 mm.
Habitat: Found in slowly moving and still water all over the British Isles, although it is rare in Cornwall and in the Scottish highlands. 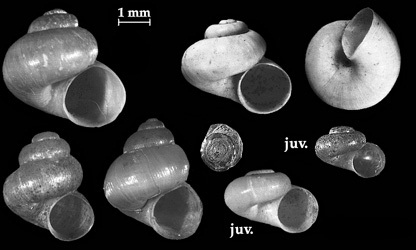 Valvata piscinalis (Müller, 1774)
Description: The shell is dull, horn-coloured, and top-shaped. It has 5 – 6 rapidly increasing, well-rounded whorls, with a pronounced suture.  The umbilicus is deep, but not very broad. The mouth aperture and operculum is circular.
Size: Height: 5 – 7 mm. Breadth: only slightly less.
Habitat: Inhabits rivers, streams, canals and lakes throughout the British Isles, but is not recorded north of Aberdeen.