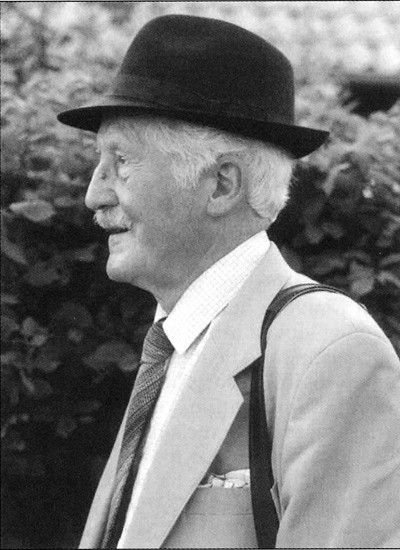 Francis de Bartolomé, President of the Society from 1979 to 1981, Honorary Member, Vice President, benefactor and former Honorary Legal Advisor and Trustee of the Society, passed away on 29 April 2000. He left a sister, Margaret, and a brother, Stephen, to whom the society sends condolences.

John Francis Martine de Bartolomé was born on 24 January 1917 at his maternal grandparents’ home in Sheffield the first child of Admiral Sir Charles, Controller of the Navy 1918–1919, and Lady Gladys Martine de Bartolomé. From the age of five the family home was at Malvern. He was educated at Marlborough College. As a pre-war officer in the Territorial Army he served throughout World War II in the Hallamshire Battalion of the Yorkshire and Lancashire Regiment mostly as Adjutant at an army base at Beachley, Gloucestershire. This interrupted his training for a career but in 1946 he qualified as a solicitor with the Sheffield firm of Branson, Bramley and Company, with whom he spent his professional life, becoming a partner in 1956. On reaching the age of sixty, in 1977, Francis retired and moved from Sheffield to West Malvern where he and his younger sister Margaret had built a home, Highlow in de Walden Road, with spectacular views to the west. There he stayed happily with 2–3 month holidays abroad each year, until 1995 when illness arising on a return flight from Barbados obliged him to be moved to a nursing home.

It is not absolutely certain how Francis first became interested in snails. This happened during his time at Marlborough, probably because a foot deformity (likely also to have confined him to Britain when in the Army) prevented him from participating in games, so he went for walks. Miss de Bartolomé recalls that on one of these outings he found an unusual snail and took it to a master who fortunately encouraged his interest and put him in touch with someone writing a book. From then on he was “hooked.”

Francis joined the Conchological Society in 1949. By 1953 he was the Society’s Honorary Legal Adviser, and he continued to be available to give legal advice until after his retirement from practice; during that time the Society had to undertake two law suits and also became a registered charity. Francis was also a Trustee from 1966 till late 1995. In 1976 he was made an Honorary Member for his work as Honorary Legal Adviser, and in 1980 he was elected President, serving the then customary two years. Thereafter, Francis remained a Vice President until his death. He was also a member of the Malacological Society of London from 1952 until his death.

Francis’s main love was helicid snails, especially those of the Mediterranean region and in particular polymorphic rock-dwelling genera such as Marmorana. Where these were concerned he was interested in attempting, if possible, to simplify the voluminous nomenclature. To this end he travelled and collected from the Azores to Iran, and his conchological writings (see below) reflect visits to the Pitiuse and Balearic islands, Corsica, Sardinia, Spain, France, Sicily and Turkey. His large collection of predominantly non-marine but also marine material material went to the Natural History Museum. The collection is particularly strong in Mediterranean species, especially such genera Marmorana, Iberus and Levantina and it includes specimens (of shells and darts) of helicids produced during cross-breeding experiments carried out in containers at home. Francis wrote relatively little on molluscs, his publications being listed below, but did so in an inimitable anecdotal style, which holds the attention of the reader.

Despite his many travels, in some respects he seems to have been something of an “innocent abroad” so he could have problems. For example, his photographing of a bay in Franco’s time, unwittingly coincided with the surfacing of a new Spanish submarine, so he spent a few days under arrest. Again in September 1972 Francis, his sister and nephew were robbed of possessions, money, passports and tickets by thieves breaking into their hire car at Çeyhan Yilankale in Turkey while they were looking at a castle ruin. As the possessions included the snails so far gathered (along with the plans for their West Malvern house) Francis’s first act was to start re-collecting specimens while his nephew looked after the practicalities.

His generous bequests to the Society, for which we are most grateful, included his malacological library, being auctioned for the benefit of the Society. Although naturally strong in publications on European land molluscs it is considerably broader in scope and shows that Francis had general as well as particular molluscan interests.

Molluscs were not his only non-professional interest. He was very keen on motorcycles and as a rider he both participated in scrambles and undertook long journeys such as to what was then Yugoslavia where he travelled with a friend on unmade roads. This hobby partly gave rise to his interest in railways because he would take his motorcycle on trains, until this became difficult, and he accumulated a considerable library especially on steam trains and timetables. Travel also brought him friends abroad, of whom Anders Grøndahl produced a pen portrait (and photograph) of Francis for a Danish national newspaper.

A charming and polite character, he was capable of quite unexpected generosity (giving away collector’s cabinets for instance) and was a born diplomat. For many years he was devoted to in his dog Budge. We miss him.

I could not have written this account without the help of many others. Miss Margaret de Bartolomé provided essential biographical and family background; Adrian Norris, Marjorie Fogan and Elanor Fogan, Beryl Rands, Barry Colville, Tom Pain, Mark Davies membership secretary Malacological Society of London, helped to fill in more detail and Peter Mordan on Francis’s collection.