Shell crafts are found throughout the world, have played an important part in the history of art and have been particularly popular in some primitive cultures.  Examples are most often seen in folk and popular art and as souvenirs produced for the tourist trade.

Nowadays, the public is more sensitive to the trade in wildlife, and issues of concern are regularly aired in natural history articles, books and on television.  Importers and retailers of natural products have come under increased scrutiny in the last few decades. The Conchological Society supports the concerns that are expressed about the shells which are used for decorative and handicraft purposes.  Where local legislation permits shell collection, only dead beach-collected shells, or food refuse, should be used for shellcraft. 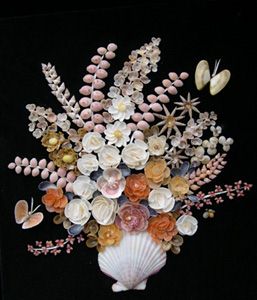 A modern example of shell work. All the shells in this picture were collected as dead shells from beaches around the coast of Cornwall in the 1980s.

Shells have been used to decorate a wide range of surfaces including mosaic floors, exterior walls, the interiors of shell houses and shell rooms, clay pots, picture frames, and the lids of wooden boxes.  They can be used to decorate a range of jewellery and when perforated can be strung to make necklaces.  Shells can be used to produce geometrical and abstract patterns or they can be arranged to form flowers, insects, human and animal figures.

Gift shops at seaside resorts are a source for many of the shell-decorated ornaments which find their way into people’s homes.  Such articles may be shell-covered miniature shoes, mirrors, trinket boxes and pictures.  More recently exotic shells have been used as components for pot pourri and this usage has attracted the particular attention of the Marine Conservation Society.

In the 18th and early 19th centuries fashionable ladies of artistic inclination collected shells and housed their collections in cabinets fitted with small drawers or wooden chests with compartmentalised trays.  A famous practioner of shell ornamentation was Mary Delany born in 1700, but it was not until about 1734, following her second marriage, that she developed a passion for collecting shells.  At Delville, her Dublin home, she made shell decorated frames, decorated a chandelier and the walls of a room which was used as a chapel.  She also made festoons of flowers to imitate stucco work to decorate the ceilings and arches of the chapel. 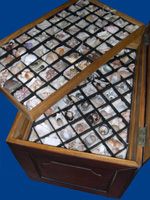 Example of a wooden chest with compartmentalised trays for storing and displaying shells.  This chest was originally made for, and belonged to a sea captain.

Shell pictures and shell nosegays were popular with exponents of shellcraft amongst whom were principally genteel women, including royalty.  They may never have collected a shell in their lives but could buy supplies for their work.  Shell work was popular on both sides of the Atlantic and later, in the 19th century, a form of shell work known as Sailors’ Valentines appeared.  These consisted of two frames of shells, hinged together so they formed a box which could be closed.  The shells could be arranged inside in a formal two-dimensional method, often including a heart design or a loving motto worked in the middle.  It was at first thought the sailors made these themselves but it is more likely that they bought them as ready-made presents to take home after their time at sea.

Objects such as birds, animals and human figures have been made out of shells from the earliest days of shellcraft and it is a theme in shell work which has persisted to the present day.  Some early examples were wooden dolls which were clothed in garments composed entirely of shells.  Often these fine examples of shellcraft are displayed inside glass domes.

Shell grottoes were all the rage in the 18th and 19th centuries in Britain.  Minerals and fossils were often used, but shells were especially popular although they have not always survived the weathering processes of a harsh climate. Grottoes were decorated by both amateurs and professionals, and children in Victorian London would build grottoes entirely composed of discarded oyster shells, or heaps of earth or sand decorated with shells.  This latter custom persists to the present day – who has not constructed a sandcastle and decorated it with shells found scattered about on the beach?