There are seemingly endless ways in which shells can adorn and enhance the lives of human beings.  They provide raw material for producing practical objects and utensils, they can be symbolic or emblematic and they can be used in design to embellish architecture, furniture, textiles and all manner of household articles.  But perhaps the use to which they have been put which has the longest history, and is most widespread in human culture, is as a means to decorate the human body, in the form of jewellery. 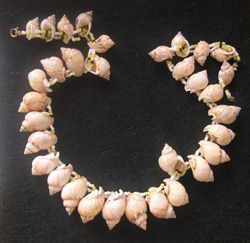 The practice of body adornment with shells may date back for over 100,000 years.  Work in prehistoric caves in Southern Africa revealed evidence believed to be the earliest known pieces of jewellery made by modern humans.  These were perforated Nassarius kraussianus shells. The shells were found in clusters of similar sizes, with perforations of similar shape and holes, and the scientists believed that they had been used to make necklaces or bracelets.  These shells must have been brought to the caves from some distance, as the nearest rivers at the time were around 20 km away. The researchers suggested that traces of red ochre on the shells also indicate that either the beads themselves or the surfaces against which they were worn were coated with the iron oxide pigment.

These discoveries prompted researchers on Cave Systems in the Mediterranean to review their shell finds. At Oued Djebbana in Algeria, about 200 km inland from the ocean, finds of perforated marine gastropod shells preserved at archaeological sites were correlated with flint tools incorporated in the same sediments and this suggested an age of at least 90,000 years. At the other site, Skhul - a cave on the slopes of Mt Carmel, radiometric dates obtained from sediment matrix adhering to one shell of Nassarius gibbosulus indicate that the shell bead comes from a layer containing 10 human fossils dating to 100,000 to 135,000 years ago, about 25,000 years earlier than previous evidence for personal decoration by modern humans in South Africa. The authors suggest that the remoteness of these sites from the seashore and a comparison of the shells to natural shell assemblages indicate deliberate selection and transport by humans for symbolic use. 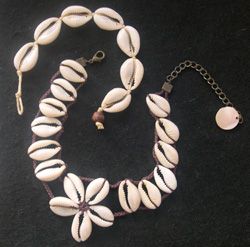 Professor Chris Stringer of London's Natural History Museum said "We're confident these were artificially made. The position of the holes are exactly where people drill shells like this when they are making necklaces."  In his view the most exciting information relates to understanding the evolution of human behavior. "The interesting thing about necklaces and this kind of behaviour is that it is symbolic. When we wear items like this, we are sending a message……….. The message may be that we are powerful, or wealthy, or sexy, that we're part of a particular group, or to ward off evil. They're not just decorative; we think they had a social meaning."

The marine shells from Skhul are in the Palaeontology Department of the Natural History Museum in London, while the shell bead from Oued Djebbana is in the collections of Museum of Man in Paris.

Nassarius (small whelks) and Cypraea (cowries) are two of the most frequently used genera of shells to have featured in shell jewellery throughout human history.

The illustrations on this page show modern examples of a necklace using a species from each of these popular shell genera.  In each case the design of the necklace is natural and unsophisticated and the shells have been perforated or cut and strung in a simple manner.