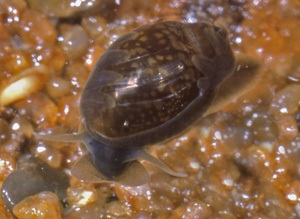 The shells of this family are clearly sinistral. The tentacles are long, slender and cylindrical, with the eyes placed at the base. The foot is narrow, terminating in a point at the rear. The mantle may have one or two fringed lobes which may extend to cover part of the exterior of the shell, as in the image to the right. Three  genera occur in northern Europe, and all are represented in Britain.

Genus: PHYSA Draparnaud, 1801
The shell is thin, more or less oval in outline, with a narrow aperture. The umbilicus is closed. The edges of the mantle extend as finger-like lobes over the exterior of the shell. A number of species have been accidentally introduced into Britain, mainly from North America, and some have become naturalised in a few canals or artificial ponds. It is very difficult to firmly identify some of these, but, for our purposes, the three usually referred to will be described. 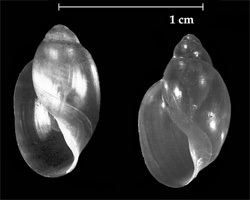 Physa fontinalis (Linnaeus, 1758)
Description: This may be taken to be our native species. The shell is very thin and fragile, glossy and transparent, and a pale horn colour. It is more or less oval in outline, and is formed of 4 - 5 swollen whorls, the last of which forms more than three-quarters of the shell height. The spire is short, with a blunt apex. The aperture is wide and oval, and the mouth edge is very thin and brittle.
Size: Height: 7 – 12 mm. Breadth: 4 – 7 mm.
Habitat: It is found in streams, rivers, ditches, canals, ponds and lakes, throughout most of the British Isles, usually on leaves of water weeds or amongst the stems. 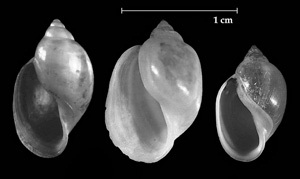 Genus: PHYSELLA Haldeman, 1843
Physella acuta (Draparnaud, 1805)
(P. heterostopha has been reduced to synonomy with P. acuta by Anderson (2003))
Some workers hold this to be a North American species introduced into Europe, and from there into Africa. Others maintain it is a European species which has become dispersed around the world.

Description: The shell is larger and more robust than P. fontinalis, consisting of 5 – 6  regularly increasing whorls, with a pointed spire. It is a pale horn colour. The sutures are deep, and the body whorl forms about two-thirds of the total height of the shell. The animal is blue-grey in colour and the mantle gives rise to 7 – 11 finger-like appendages on the right side, and 4 – 6 similar ones on the left. The mouth edge is not as thin and brittle as P. fontinalis, and sometimes bears a slight white rib.
Size: Height: 7 – 12 mm. Breadth: 7 – 10 mm.
Habitat: In slow-flowing or still freshwater, in scattered localities in south and central England.

The Society is indebted to Dr. Roy Anderson for the following notes on Physa gyrina and for providing the associated colour photographs 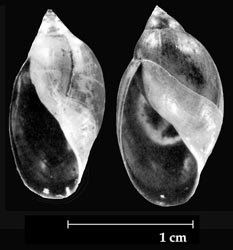 Physella gyrina (Say, 1821)
Description: The shells can be very variable in shape and it may be difficult to differentiate from P. acuta. If live specimens are available the species may be distinguished easily by looking at the animals’ bodies. As the photos below show, P. gyrina has very obvious whitish pigment spots on a dark grey ground, over the whole body including the tentacles, whereas P. acuta lacks the spotting and the ground colour is more variable ranging from a pale grey to blue-grey or even black. The spire of P. gyrina is conical, flat sided, and the sutures between whorls is shallower.
Size: Shells are larger than typical P. acuta, from 9 – 22mm in height. The colour tends to be more reddish and the rib inside the aperture more reddish-brown. Shell shape and colour in both are variable and do not make good characters. It is better to rely on body colouration. Anything much over 10mm. in height is nearly certain to be P. gyrina.
Habitat: In both Ireland and N. America P. gyrina tends to live in clean water in the marginal zones of large lakes and rivers and in Ireland it is usually found in the shallow margins or in marshy pools along shorelines, often with Lymnaea palustris agg. etc. Physella acuta prefers smaller water bodies such as ponds, canals, etc. and will tolerate much poorer conditions. It is also highly tolerant of salt and can survive in coastal pools close to or in saltmarshes. 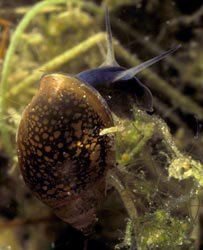 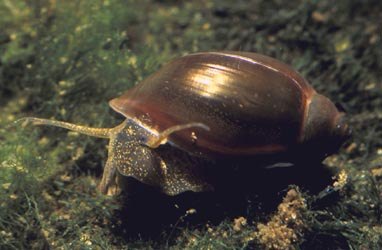 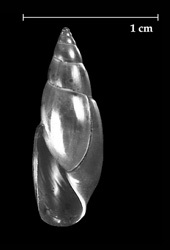 Genus: APLEXA Fleming, 1820
Only one species occurs in Europe.

Aplexa hypnorum (Linnaeus, 1758)
Description: The shell is thin, fragile and highly polished when fresh. It is a yellowish or reddish horn colour, and much less globose than any of the Physa species. It consists of 6 – 7 hardly convex whorls. The mouth aperture is long and narrow, and the mouth edge is thin and sharp. The animal itself is almost black.
Size: Height: 9 – 13 mm. Breadth: 4 – 5 mm.
Habitat: It is frequently encountered completely out of water and its favoured habitats appear to be marshes and ponds which tend to dry out in summer.  It has a general, but local, distribution throughout the British Isles.