In mid June 2007, I went to the Kingley Vale National Nature Reserve in W. Sussex to help my wife. Dr Margaret Redfern, make her annual samples of the Yew Gall Midge, which she has been doing ever since 1966! This year, the weather had been very wet, and indeed, we got slightly rained on while sampling. One of the galls she collected had a juvenile Balea crawling on it. So I started looking on the trunks and branches of the Yew trees for which Kingley Vale is famous. It soon became obvious that there were lots of Balea, and that they were all the newly recognised B. heydeni.

Most were on yew, a few on hawthorn, whitebeam and ash, none on cherry. Of course, I could not climb the trees, but most were on live branches, still wet, and on the upper sides of more-or-less horizontal branches, not on the main trunks, nor on dead and partly rotten branches. Most were at least a metre above ground level. Some isolated clumps of yew appeared not to have any.

Obviously, the weather was just right to find active animals, and some trees held dozens of individuals in just a superficial search (given that this is a Nature Reserve, I left them undisturbed). Given the size of the yew woods, there must be at least tens of thousands in the Reserve. The yew woods themselves have virtually no vegetation under the trees, and very high densities of rabbits and deer have kept the whole place very open. Despite the ideal weather, the only other species I saw alive and active were Lehmannia marginata (also on the trees), and a single Pomatias elegans on the ground. It is often claimed that Balea often occurs in places where other snails are scarce; my observation tends to confirm that.

All old records refer to B. perversa (agg). Nearly 30 years ago. David Holyoak (Journal of Conchology, 29: 319-323, 1978) showed how urban pollution affected Balea in E. Sussex. Kingley Vale is not in the lee of any major source of pollution, and it certainly has large numbers today. Yew trees are not the obvious place to look for snails, but anyone who knows of places where there are many yews might well inspect them closely in wet weather.

The Holyoak-Seddon Collection at National Museum Wales, has material used by Holyoak (1978). A recent review of these following the publication in Journal of Conchology, showed that all of the Sussex populations were B. heydeni, not perversa. MB Seddon 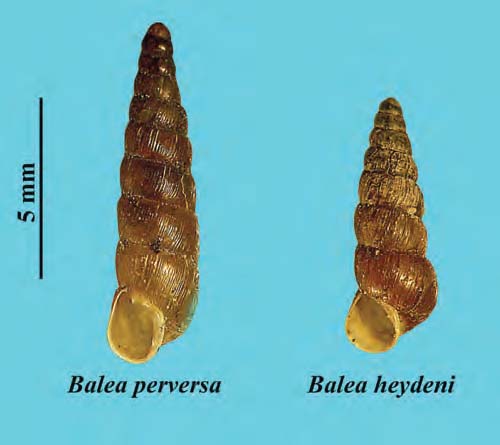