Adhesive postage stamps were first introduced in 1840, and it was not long before a shell was included in the design.  This was a stylised Strombus gigas on the first Bahamian stamps on 10 June 1859.  Since then shells (and other molluscs) have been represented on the stamps of about 270 countries, with over 5500 different stamps.

It was not until 1950, however, that the first stamp with 'realistic' shells was issued; Strombus luhuanus,  Lambis lambis and Decatopecten radula were shown on a stamp from the Ryukyu Islands.

The great majority of illustrated molluscs are gastropods; the most reproduced shell, although in a stylised form, is Turbinella pyrum, which appears on numerous stamps of the Indian Feudatory States of Cochin, Travancore and Travancore-Cochin; this shell, the Indian Chank, is a religious symbol of these states.

The most represented 'realistic' shell is Strombus gigas, while the largest families, not surprisingly, are Conidae with 76 species or subspecies, followed closely by Cypraeidae with 72 and Muricidae with 60.  Geographically most illustrated shells are from tropical waters, although countries as far north as Iceland (Buccinum undatum) and as far south as the British Antarctic Territory (a set of fossils) have shown molluscs on stamps.

Bivalves have not been forgotten by stamp designers, there being many families represented, of which Pectinidae are the most frequent.  It is of interest that no tusk shells have, to date, been shown on any stamp, and only very few chitons.  Land and freshwater shells are shown on a good number of stamps. 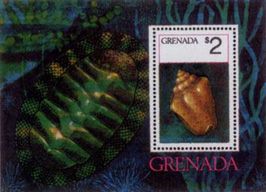 Molluscs without shells - nudibranchs and cephalopods - are commonly included on stamps, both realistic and stylised; Jules Verne's "20,000 Leagues under the Sea" has allowed many stylised octopi to be shown on stamps. Terrestrial slugs are few and far between.

Fossils are included in over 100 stamps, many of them showing ammonites and other cephalopods, although fossil gastropods and bivalves are present on stamps.

Most molluscs are shown realistically, but the shell on some stamps is very small and stylised and can be difficult to see, let alone identify.  Much time can be spent trying to put a name to a particular shell (you cannot always assume that the name printed on the stamp is correct), or pestering more knowledgeable friends for their opinions.

Great Britain has not done well in the "Shell Stamp" stakes.  The only realistic shell is Segmentina nitida which appeared in the Endangered Species set of 1998.  Britannia is shown riding in a stylised shell boat (either a cockle or a scallop) is shown on early high value stamps, and a snail can be seen on a Greetings stamp of 1991.  British Islands do much better, the Isle of Man, Guernsey and Jersey all issuing more shell stamps than Great Britain.

There is something for everyone in Shell Stamps, from common to rare shells or common to rare stamps (some shell stamps are catalogued at up to £30,000!)  And new issues appear every year, ensuring that you can never "complete" your collection.  You may decide just to collect stamps where the shell forms the major part of the design, or to include stamps even when the mollusc is an incidental part of the design, or is very small and stylised.  Some also attempt to collect all the shells that are shown on stamps - easy for most shells, but try obtaining specimens of Pterynotus lightbourni or Calyptogena magnifica and you may find it difficult or impossible.