Sand dunes often contain a good deal of lime (in the form of fragments of broken seashells) essential for the formation of gastropod shells, but the habitat is usually very dry, which is not congenial to the the majority of snails. However, some species of Mediterranean origin are very much at home in such conditions, so it is not surprising that some of the species found in sand dunes are accidental introductions.

Some of the species usually associated with calcareous grassland are also found in sand dunes, as are species which are at the northern limit of their distribution, but which can take advantage of the moderating effect of coastal conditions.

Dune slacks are the hollows between the dune ridges, which remain moist for much of the year and for part of the year may have standing water. These may contain species of more general distibution.

Areas of mud and small pools associated with rivers and estuaries and colonised with many species of plant (e.g. sea purslane, Atriplex) and green algae (e.g. Vaucheria). Species which may be found include:– 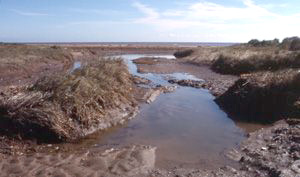 Bodies of water with a salinity ranging from 5 to 35 parts per thousand of chloride. The species found are determined by the salinity.