The flora and fauna of rocky shores is primarily dominated by the geology of the area and the degree of exposure to wave action. Although they are also affected by a host of more local factors. The different vertical zones of the shore support different species and each should be searched carefully - ideally following the tide out. It is best not to waste time looking for smaller species - but rather gather a representative sample of the habitat for more careful examination at home - ideally keep habitat samples separate (and labelled) as this can help to provide more detailed information on the habitat preferences of species. 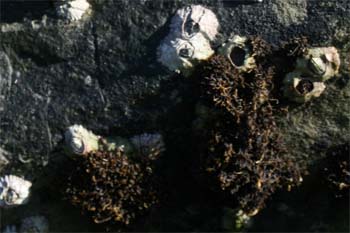 On the upper shore pay particular attention for more cryptic species in in crevices. If they contain a little silt (some of which may be taken home for more careful examination) or under bounders embedded in sediment there may be Cingula cingullus, Leucophytia bidentata or Otina ovata. Lichinia often contains juvenile winkles, Lasaea rubra or Turtonia minuta. The barnacle zone will also contain Littorina arcana and Littorina saxatilis with Littorina nigrolineata found just below this zone.

On the middle and lower shore it is worth generally searching the dominant algae for the occasional nudibranch or the range of more specialist habitats outlined below. 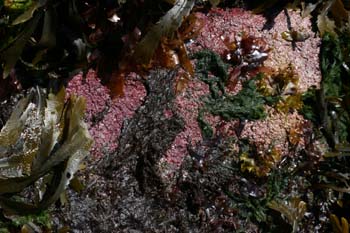 The seaweeds on a rocky shore are an enormously important habitat for molluscs both in terms of food and shelter. While some of the associated species are relatively large for example the winkles most are much smaller. As result it is often necessary to remove samples of algae either for rinsing in the field or better still for more careful examination at home. Species such as Fucus serratus if spirorbid worms are present will often yield pyramidellid species.

Samples of smaller species of algae such as Cladophora, Commalina, Chondrus and Girgartina should also be selected. Filamentous algae sometimes contains swarms of molluscs such as rissoids. The fronds of larger algae such as Laminaria should also be carefully examined and samples taken if they look promising (particularly if hydroids are present). Codium and Himanthalia shoud also be carefully examined particularly fro Elysia viridis and Placida dendritica. These species may be more easily detected by leaving the weed submerged in seawater on return home. Laminaria holdfasts also should not be overlooked - particularly older ones.

For samples of weed which are removed from the shore there are two possible approaches.  You can either wash the weeds through a bucket of seawater or tap water.  The weeds should be teased apart and shaken vigorously.  Some of the animals living amongst the fronds along with some of the sediment will be flushed into the water.  Do this for several samples, removing stray strands of weed, any obvious larger animals.  You then pass the contents of the bucket over sieves of say 5mm to catch species visible with the naked eye, and 0.5mm or 0.3mm mesh to remove unwanted fine sediment and bag or pot the residue in each sieve.  Animals retrieved will be alive if processed in seawater and can be observed in shallow trays or Petri dishes.  If tap water is used, soak for at least 3 hours, normally overnight, to allow all the animals to become moribund and detach from the seaweed.  Using tap water is likely to be more efficient in terms of a greater abundance of molluscs retrieved.  In either case, sort immediately or preserve with Industrial Methylated Spirit or another spirit (vodka can be used).  Sort under magnification, normally a x10 to x30 microscope. 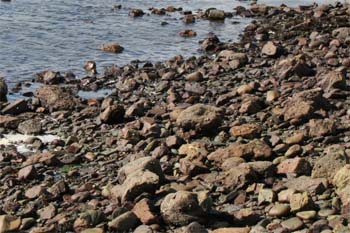 Boulders provide a suitable habitat for a range of molluscs and all aspects of them should be carefully examined.

While the most interesting habitat is underneath the bounders the tops of boulders should not be overlooked. Tectura may be well disguised against Lithophyllum. Also keep an eye out for holes that may indicate either boring species (such as Barnea or Hiatella) or nestling species such as Venerupis senegalensis.

The undersides of boulders can provide a range of habitats depending on the underlying substrate, how deeply it is embedded as a well as the actual surface of the boulder itself. It should ideally have any of the following: veneers of silt, some sponge and ascidian growth or serpulid colonisation such as Pomatoceros.  The latter is particularly good for pyramidellid gastropods which are small, white, inconspicuous and consequently very under-recorded.  Check the undersurface first for what you can see by eye then, using the washing-up brush, the rock surfaces should then be brushed over or in a bucket of water to dislodge the motile species.  Often a fine silty layer will coat the upper surface of the stone under the rock and this should also be brushed into the bucket.  This sample should then be sieved over a 0.5mm or 0.3mm mesh and the residue bagged or potted.  When carrying out rock scrubbings, boulders with space for water flow underneath, as in a drainage rill, are especially interesting, as are those rather muddy underneath.  It is worth investigating amongst the smaller stones under boulders which shelter many species.  Boulders with a good growth of small weeds on top often have lots of things underneath them, because they haven't been turned over recently by wave action. It is very important to return the bounders to their original position after they have been examined.

Areas where the water tends to move often have a rich and potentially very interesting fauna. Areas of tidal rips or rapids which often be spotted as the tide recedes are often rich in hydroids and hence nudibranchs. Care is needed to ensure that the current in these areas is not too strong to allow the area to be safely worked - and it is possible that the current will drop off at low water.

Waterfalls or channels are rare but do occur where, for example, a high level lagoon empties more slowly as the tide goes out. Such areas tend to allow the normal distributions of species to extend up the shore or even sublittoral species to be found on the shore.

Crevices and overhangs should be carefully examined. High on the shore they will contain a range of winkle species. A torch and magnifying glass or glasses will be handy as many of the specimens will be relatively small.

Similarly all aspects of overhangs should be examined if possible (roof, walls and floor). Feel under ledges and round corners but beware of potentially dangerous animals such as lobsters, eels and urchins. Again a torch may be very useful. 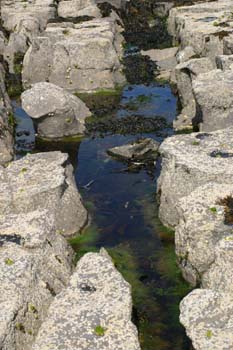 Rock pools can almost be regarded as part of the sublittoral however, those high on the shore can undergo very extreme changes in terms of temperature and salinity and as a result are usually more limited in the species assemblage they contain. The best pools are those lower on the shore. While very deep pools may yield a typically sublittoral assemblage they can often be difficult to work without swimming. The best pools are shallow flat bottomed ones where the whole area is accessible by wading. Pools should be worked for all the microhabitats they contain including algae, boulders and crevices. If sediment is present this should not be overlooked. Pools on more exposed coasts often have a considerable growth of Lithophyllum which, particularly if old, can be broken away to reveal a crevice fauna and potentially species requiring a more lime-rich environment than would otherwise be available on the shore.