I thank everyone who has submitted records during 2010. Some 138,400 records from Britain and Ireland have now been digitised. I would like to thank Steve Wilkinson for his help with data input during the year.

The nudibranch Cuthona amoena has been recorded from Sea Area (SA) 23, Anglesey, for the first time. Ian Smith found a juvenile specimen, confirmed by Bernard Picton, near Menai Bridge in the Straits on Anglesey, in August 2010. Also in August, and new to SA 23, two specimens of Doto koenneckeri were found at low water springs on the Menai Straits. The animals were found by inspecting the alga Halidrys siliquosa for their food, the hydroid Aglaophenia pluma. This identification was also confirmed by Bernard Picton.

I’m grateful to Ian for flagging a record for Okenea elegans from SA 22, Cardigan Bay which is new to the Census. The sighting was reported on the Seaslug Forum by Anthony Gilbert and Maureen Collins, from a dive site in Bardsey Sound, Lleyn Peninsula. The specimen was on red alga attached to a hard substrate ledge at a depth of 8 m. In recent years the Seaslug Forum website, which has reported seaslug sightings from around the world, has been a useful source of UK records. Unfortunately it was closed down, as an active forum in June 2010, over funding issues, but the archive remains accessible on the internet.

During the autumn and winter, Ian Smith undertook extensive and systematic field work to try and ascertain the extent of Assiminea grayana colonisation in the tidal stretches of the rivers and estuaries of the Dee, Mersey and Clwyd. He found the animal, often living in abundance (thousands per m2), at some 30 six-figure grid referenced sites. A full article is in preparation for Mollusc World. The species was found to be particularly well established on the Dee where Ian found it at almost every station he examined. Searching in the Conwy estuary failed to reveal the species.

Truncatella subcylindrica has now been recorded on the seaward coast of Portland, Dorset by Malcolm Storey, 1st May. At East Weares, SY70607238, which has an exposed eastern coastal aspect, there are two old man-made tidal lagoons that were originally used for salt production. They now leak and are tidal and are separated from the sea by shingle bars (although storm waves sometimes break over them). The smaller of the two pools is about 6 m by 4.6 m and full of rocks covered in Pelvetia. It has a gently sloping, zoned beach which is very sheltered because it lacks wave action. The Truncatella were found under stones among a small ring of saltmarsh with seedling Salicornia. White Lasaea adansoni were associated with the habitat.

Subsequently Steve Trewhella found Paludinella littorina living in this habitat on 5th September. Prior to that, in July, he had found the species living underneath large boulders on the seaward side of the shingle bars which separate the lagoons from the open sea. He has uncovered two further sites for Paludinella in Dorset. Snails have been found under rocks in a boulder field adjacent to Charnel Bay, Kimmeridge SY90157900 and also at Chapman’s Pool SY95557660. Here the snails’ area of colonisation extends rather lower on the shore (into the zone of Ascophyllum) than is usual.

In my report for 2008 I highlighted Steve’s find of an unfamiliar chamid bivalve cemented to a plastic fishbox thrown up on Chesil Beach. I had identified this as Pseudochama gryphina, a Mediterranean species. On January 1st 2010 Steve found a second chamid on some plastic flotsam beached on the Chesil Bank. (It took him an hour with mini drills and blow torches to extract it!) Steve believes most of the flotsam he finds on Chesil emanates from the western Atlantic and I recommended he send both the chamid specimens to Graham Oliver in the BioSyB department at Cardiff Museum. Dr Oliver reports: “I have now examined both shells that you sent to me and find that both shells have the attached valve coiling clockwise and therefore both belong to Chama. Recent papers suggest that the coiling may vary within a species and that the genus Pseudochama is of little value. I have compared your shells with Chama gryphoides from the Mediterranean and am unable to distinguish them. I would however be similarly unable to separate them from the American Chama congregata. I would suggest that they are not C. (Pseudochama) gryphina; shells in our collection are always coiled anticlockwise, are thinner and the cemented valve is deeply cupped. Being attached to flotsam often suggests a Gulf Stream origin and one might expect these shells to come from the western Atlantic, I have not looked in detail at surface ocean currents which might point to such an origin or to a Mediterranean source. Clearly if you found them attached to our shores then the Mediterranean origin would be assumed.” Both Chesil specimens have been imaged and can be accessed via the Museum’s Marine Bivalves of the British Isles website: http://naturalhistory.museumwales.ac.uk/britishbivalves/browserecord.php?-recid=478.

In January Jim Logan highlighted an unusual stranding in Dumfriesshire. About 20 Scaphander lignarius shells, some with dead animals attached, were washed up on a beach in Luce Bay near Stranraer. Scaphander usually occur as beached finds in ones and twos. Whilst this report was in preparation a notification was posted on the ‘conchology-uk’ bulletin board. During January 2011 hundreds if not thousands of these shells were found in the same area. An estimate of density was 20 to 60 shells per m2. One possible explanation that connects the two events is the extremely low air temperatures at the time of the strandings.

Anna Holmes of Cardiff Museum has notified a first east coast record for the galeommatid Coracuta obliquata. Samples being processed at the Museum, from Silver Pit, east of the Humber, yielded live-collected specimens. In 2006 C. obliquata was recorded from Carmarthen Bay in the Bristol Channel, providing the first British record in 100 years and the first live record in British waters (Holmes et al., 2006. J. Conch. Lond. 2006 39 (2) 151).

I thank John Fisher for regular submissions, particularly from Cornwall. John examines large samples of shellsand, often from honey-pot sites, and derives long lists including  several rarely recorded species. Amongst these was a single shell of T. subcylindrica from Silverstrand, east of Barra, north Galway Bay. This disjunct record extends its known distribution northwards; currently there are several sites south of Galway. His very notable record is for Glossus humanus, a sublittoral species with records from only 17 Sea Areas most of these being shell rather than live occurrences. Several living animals were trawled by commercial trawlermen west of Scilly (50˚ 02’N 07˚ 11’W) in July 2010. This is a new sea area record (SA19 Scilly Isles).

David Fenwick, a wildlife photographer working in Cornwall, discovered a new colony of Pholas dactylus in March 2010 near Par Beach, Cornwall (SX 08828 52420). The animals were found at the foot of a rock outcrop on a low spring tide. The siphons were protruding from holes in the shale bedrock. There were many holes containing dead shells (figure 1), but David did extract one pholad to confirm the identity (figure 2). 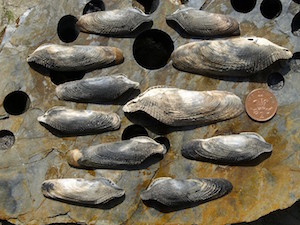 A fresh, articulated specimen of Mactra glauca was washed in at a site known as the Cup and Saucer at Fort Grey on Guernsey in June 2009, found by Troy Waterman and reported to me by Richard Lord in 2010. According to Society records the species was last recorded alive on Guernsey in 1922.

On Jersey Paul Chambers reported that M. glauca has expanded its range to include Les Minquiers and the south coast of Jersey (off Green Island). Paul knows the local shores well and cites finds of Capulus ungaricus, Scrobicularia plana and Lyonsia norvegica as unusual and noteworthy.

Jujubinus striatus is a locally abundant trochid in the Channel Islands but rare on British and Irish coasts. It is known on the Isles of Scilly and participants on the field meeting to the islands in September were glad to find the species living on St Martin’s. It has a close association with the marine grass Zostera marina and was found near the Zostera beds around White Island. 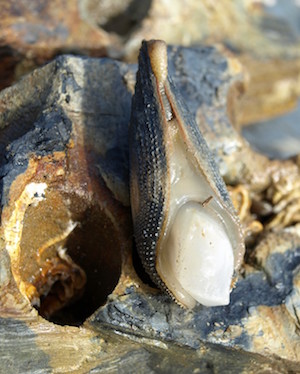 I would like to conclude on a personal note by remembering Terry Wimbleton who died last year. Over the years Terry was a regular and careful contributor of records to the Society’s marine scheme. He patrolled his patch, a stretch along the north Solent coast, regularly, and came to know his sites and their species assemblages very well. Something new would readily catch his eye and would need to be checked. Terry’s enthusiasm for molluscs and their shells was infectious. He was an active participant with local organisations, something of a conchological ambassador, and I have no doubt his voluntary efforts with museums and the like are missed.