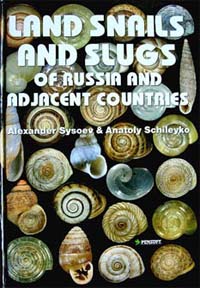 Those of us living and working in relatively small countries in northern Europe can turn to authoritative and reasonably complete guides to the land mollusc faunas of their native lands, or even to works covering the whole of non-Russian Europe north of the main mountain chains (the fauna of Mediterranean and Balkan Europe is more difficult). While there may be difficulties over names, finding out what lives where and identifying specimens does not require visits to museums or very specialist papers.

Russia, and the many countries once part of the Russian Empire or the Soviet Union, is a different and altogether more daunting proposition. The huge size, the immense range of habitats and environments, and the relatively unexplored nature of much of the terrain make the compilation of a fauna difficult. The great work of Likharev and Rammel’meier (1952), Terrestrial Mollusks of the fauna of the USSR (translated into English in 1962) was the only easy resource for those interested in the fauna of the old USSR.

Since then, of course, many new species have been described, ranges are better known and systematics and nomenclature have changed. Major revisions and guides to family and superfamily groups have been produced. In particular, major works by Likharev and Schileyko himself have been supplemented both by regional faunas and monographs. For those not able to read Russian or German, Roman Egorov’s series Treasure of Russian Shells provides a point of access to the fauna (also relating to the USSR and not exclusively Russia).

In this book, Sysoev and Schileyko give an account of all species of terrestrial molluscs currently recognised within the borders of the old USSR. Nearly 800 species are listed. For each, the original description is referenced by page and figures (and by full citation in the bibliography, a rare and useful practice); some synonymy is given, as are the type locality (where known), the location of types (often not known, or missing), shell dimensions (snails) or length (slugs) and brief notes on distribution within the borders of the USSR. The systematic arrangement follows Schileyko’s own designation of higher categories, which may be unfamiliar to some readers, but, thankfully, it avoids designation of subgenera. Within genera, species are listed alphabetically by their trivial names. Nearly all the species listed are illustrated. Most of the snails are shown in colour plates (photographs) of the shells, with a few shown as line drawings in text figures. The authors have gone to considerable trouble to obtain images of type specimens. Slugs are illustrated by colour paintings (mainly of preserved specimens) and some photographs. It is a heroic achievement, thoroughly researched, well presented and comprehensive. It opens up to non-Russian speakers the results of many years work by Schileyko and the late I.M. Likharev, including much unpublished material. The literature has been followed intensively right up to the present.

This is a detailed catalogue, and not an identification guide. There are no verbal descriptions, and there are many species which can be identified only by dissection, or by shell characters (e.g. the clausilium and lamellae in Clausiliidae) which are not illustrated. The numerous illustrations, while useful, are not in themselves a means of accurate determinations, and will have added considerably to the price. Guidance on difficult separations is given in a few cases, and doubts are expressed in others, especially in the case of the many species of Cochlicopa described by Starobogatov. It is a place to start, not to complete, the identification of fauna found in the territory covered.

There are a few points where the user may be confused or have difficulties. In terms of detail, it falls somewhere between a truly comprehensive catalogue such as that of Riedel (1988) for the Polish fauna, and a simple check-list, for example the very spare account presented in the original CLECOM list for northern and central Europe (Falkner, Bank & von Proschwitz, 2001) which lacks any synonymy or reference to original descriptions. For synonymy, recently and commonly used generic names rejected by the authors are not indexed (e.g. Nesovitrea for Perpolita). Hence, it is not always possible to trace a change in generic names, and some disappear completely. Some synonymies will surprise workers in other European countries, most notably the inclusion of Vertigo geyeri, V.genesii and V. alpestris under V. modesta. No published reference is given to justify this suppression of generally accepted species. Geographical distributions are outlined verbally, but in some cases the reader unfamiliar with the fine detail of Soviet geography would be hard put to it to locate the area from the description. Even the CLECOM list indicates in which countries species have been found.

Despite these points there is no doubt that this will be a key source for those studying land molluscs in the territories previously within the USSR. The price, at least through British suppliers, is so high (c. 100 Euros) as to deter many individual purchasers, but it is clearly an essential work for museums and libraries. We can hope that it will be followed by guides to identification, though of necessity, given the size of the fauna, these will have to be separated by taxonomic groups or by geographical region. Without these, recording of fauna, essential to inform conservation policies, will remain the preserve of professional specialists of whom there are very few relative to the area involved.