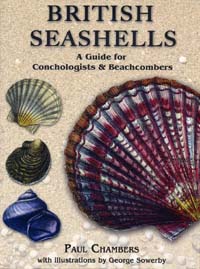 Hard on the heels of Paul Chambers’ recent book on Channel Island Marine Molluscs (reviewed in Mollusc World no. 21) , comes this celebration of some 400 species of British seashell (it does not include non-marine molluscs, sea-slugs, cephalopods or chitons), which live on the beach or in the shallow seas surrounding the British Isles.

In writing this book Paul does not set himself up as an expert on British Shells although he is very knowledgeable. The information it contains is a fortunate by-product resulting from many years spent combing the literature in university and museum libraries, as well as the British Library, to search out distributional information and records for the Channel Islands book. It should probably be said at the outset that although it is suggested that the book may be regarded as an identification guide - and it does indeed provide a concise description of species, the etymology of Latin names and vignettes of the shells – its true value rests as a compilation of information of cultural and historical significance and interest for Britain’s seashells.

So this book is, as Paul Chambers claims, a novelty after a period of some 140 years. The subject matter of the book has driven Paul’s approach and style. He appreciates the natural historical roles of many of the early collectors and players in conchological studies in the British Isles, and he has attempted to impart something of a Victorian essence in the book. The original figures by George Sowerby for Jeffreys’ British Conchology (1862-1869) have been used as illustrations. In their reproduced form they give some fair impression of the shell, although they could not be considered to be reliable for identification. There are other books, and these days, useful resources on the Internet, to cover stringent identification requirements.

This is a delightful compilation of quirky fact, conchological snippets and anecdotes, and sound historical information on Britain’s marine shells. I suppose this volume fits within the genre of a Common-place book although this has always seemed to me to be a bit of a misnomer since often the information contained in such compilations is far from common knowledge. It’s a book not just for your shelves, but to sit on a coffee table, or bedside cabinet, to be dipped into and to prompt the thought: “I didn’t know that”!

Between its boards you can read that George Barlee was converted to shell-collecting after the death of his young son. Picking shells from the shore became his antidote to depression and he retired early to indulge his new enthusiasm for conchology. Then again, did you know that the elegant and aptly named Pelican’s Foot seashell was called the ‘blobber-lipped Edinburgh whelk’ in the 18th century?....... And how the ‘Five Shilling Shell’ (Mactra glauca) got its name.

Paul Chambers has attempted to draw out something of the ‘personality’ or character of shells, and the characters who populated the Victorian world of conchology. He makes the point that in recent times our attitude towards nature has become rather more dispassionate and clinical. This shift must in some part be driven by the need to focus on conservation and biodiversity studies of our molluscan fauna. Published in hardback with an attractive dust jacket, this book is presented to stand the test of serial thumbing. Despite its cover price, in line with current trends in the book retailing trade, you will already find it for rather less on Amazon’s website and and it is also offered at a cut price by other booksellers.