Notes on the Sphaerium corneum group

In the guide to the Freshwater Bivalves of Britain & Ireland (Killeen, Aldridge & Oliver 2004) we recognised Sphaerium nucleus (Studer, 1820) as part of the fauna. At that time it had been recorded only from Pevensey Levels, the Lower Waveney valley and Norfolk Broads. It was subsequently recorded from Ireland (Moorkens 2005).

I have continued to examine samples of ‘Sphaerium corneum’ and have now seen S. nucleus from several counties in Ireland, the Somerset Levels and other Sussex and East Anglian locations in England. However, these studies have raised the question of whether we have Sphaerium ovale (Férussac, 1807). Whilst Sphaerium nucleus is now widely recognized as a distinct taxon and has been recorded from several European countries, the position of S. ovale is less clear. It is listed in the CLECOM checklist (Falkner et al. 2001) as occurring in the UK but not Ireland. It is also listed as occurring in other European countries. It is recognized in Germany and has been recorded frequently in the north of the country (Zettler & Glöer 2006), but the sparsity of any mention in the literature for other countries suggests that it is not widely recognized or accepted.

The characters for distinguishing S. corneum, S. nucleus and S. ovale are shell shape and tumidity, pore density, thickness of the hinge plate, and size/shape of the cardinal teeth. The following table of characters is based on descriptions given by Korniushin & Hackenberg 2000.

Sphaerium nucleus is very tumid, almost spherical with the point of greatest tumidity at the middle of the shell or towards the ventral margin. Sphaerium corneum usually has its greatest tumidity near the umbo and S. ovale appears to be intermediate between the 2. However, all (and especially S. corneum) appear to be variable.

There appears to be habitat partitioning between the species: Sphaerium corneum lives in a wide range of lotic (flowing) and lentic (standing) habitats. According to Zettler & Glöer, in north Germany S. nucleus “lives predominantly in small, temporary waters, like pools in the woods or reeds. The animals can be found there amongst aquatic vegetation or dead leaves; it can also be found in moors, ditches and ponds; it has not been recorded from the "shores" of large lakes or rivers, but in swampy/boggy cut-off meanders; the preferred substrate is mud over anaerobic substrate. S. nucleus is often associated with Pisidium globulare, also with P. personatum and P. milium”. For S. ovale they state it “prefers running waters like ditches and flumes, also in rivulets and rivers; specimens were found in sludge/silt or varying consistency, also in silty sands, fine and coarse sands. S. ovale may be associated with S. corneum, but predominantly it will be the only member of genus Sphaerium found”.

All of the Sphaerium with dense pores that I have examined from Ireland and England are from lentic habitats, swampy conditions in drainage ditches except at one site, in a densely vegetated lake margin. These tend to be densely and richly vegetated places, often with a diverse suite of molluscs and other invertebrates, including rare species such as Anisus vorticulus or Segmentina nitida. The lentic conditions for S. nucleus indicated by Zettler & Glöer suggest a very poor quality habitat, however, the somewhat better quality habitat given for S. ovale is lotic. In terms of shell shape and tumidity most Irish and English specimens appear to more closely resemble S. nucleus. Peter Glöer has examined some of this material and has recognised both nucleus and ovale.

There are clearly problems with this group of species and it is likely to require molecular studies to resolve their taxonomic position. In the meantime I would encourage members to look more closely at Sphaerium specimens, particularly those from lentic habitats. I would be pleased to examine material and offer an opinion.

I’m grateful to Jim Turner, National Museum of Wales for imaging the specimens; to Peter Glöer for examining some of my material and useful discussion; to Volker Buddensiek for assistance with translating German text, and to Chris Williams, Martin Willing and Martin Drake for loaning additional material for examination. 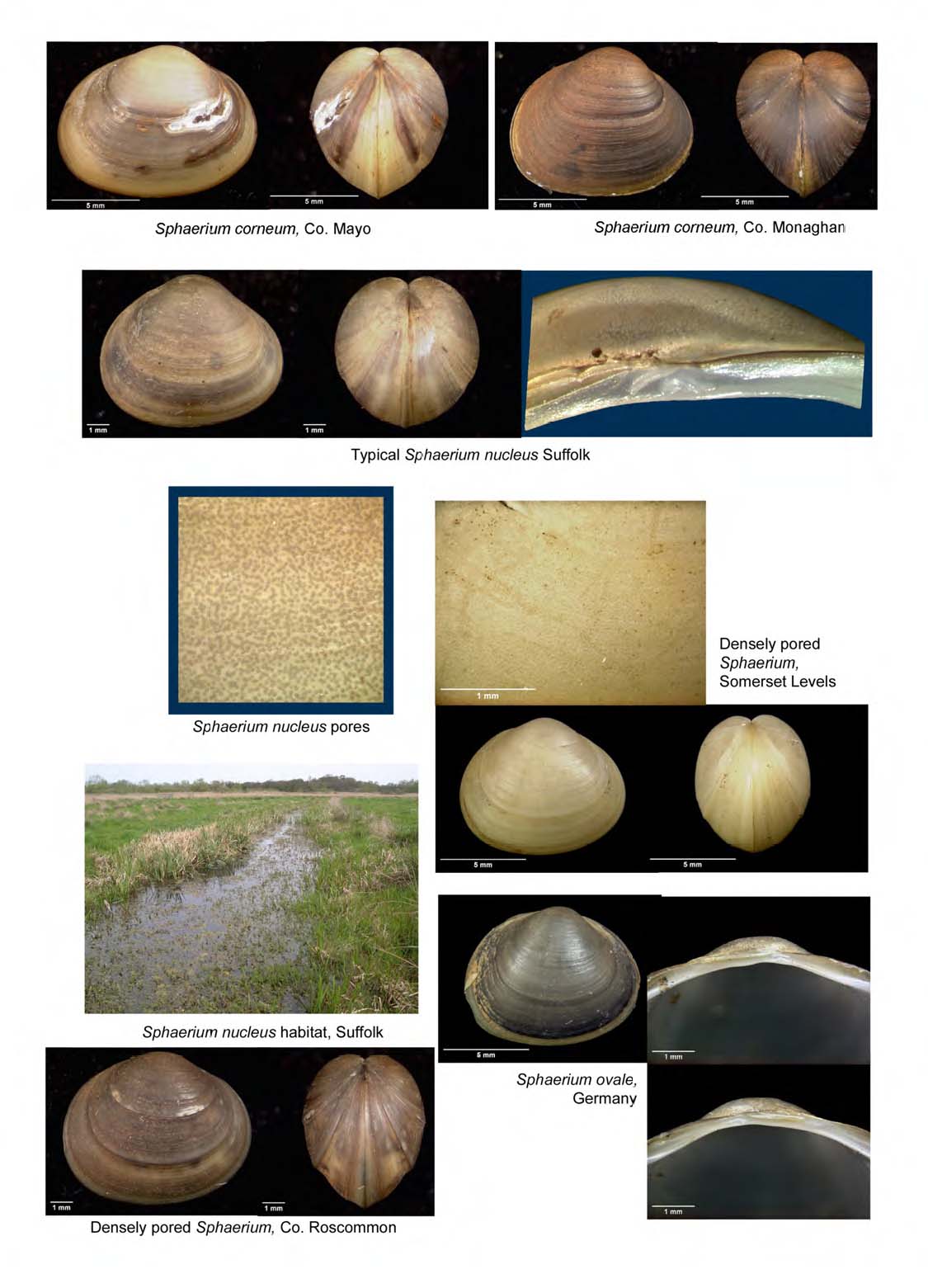 The accompanying page of illustrations shows a selection of Sphaerium from England and Ireland. The S. corneum are particularly tumid but they lack the dense pores (and when opened they had the typical narrow hinge plate). Also illustrated are typical S. nucleus, densely pored Sphaerium from Somerset Levels and a site in Rocscommon, and S. ovale from Germany.