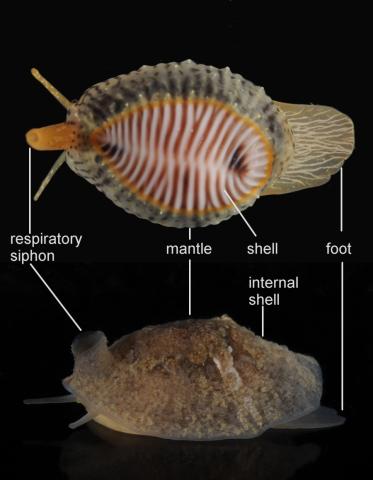 The Lamellariacea are not in the Opisthobranchia, which contains the majority of sea slugs, but they show interesting similar evolution towards the slug body form where the shell is lost, becomes enclosed, or is too small to accommodate the body.
Two British species, Lamellaria perspicua and L. latens, are true slugs, having flimsy shells which are completely and permanently enclosed by the fused mantle in adults. They resemble the dorid nudibranchs (Euctenidiacea / Anthobranchia) in body shape and the secretion of defensive chemicals, but lack rhinophores and gills on the dorsal surface, and have a siphon formed by the rolling of the front edge of the mantle.
The two British cowries, Trivia monacha and Trivia arctica, and their close relative, Erato voluta have respiratory siphons too. They can also completely enclose their shells with the mantle, but the lobes are not fused and can be withdrawn into their shells when disturbed.

The bodies of Velutina plicatilis, V. velutina and V. undata can be accommodated in their shells which are weakly calcified and have wide apertures without the protection of an operculum. When active, their mantles reflect to cover a small part of the shell.