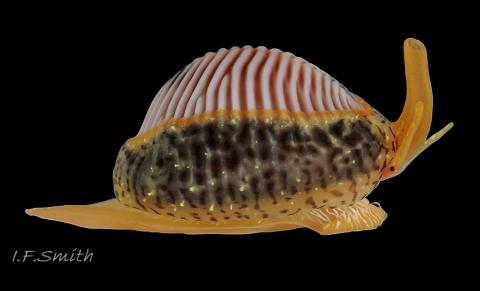 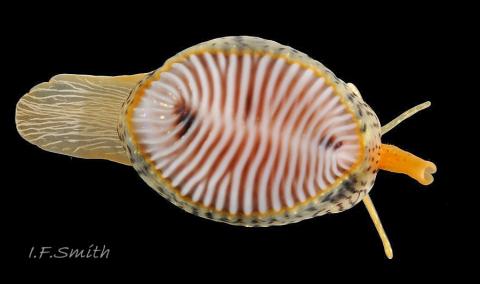 Vernacular names: Spotted cowrie; European cowrie; Grottie-buckie (Scots); Cragen Fair (Welsh);
Adult shell
10mm to 12 mm high (longest dimension of shell) by about 8mm wide.Typical ovoid cowrie shape. Solidly built with about twenty strong transverse ridges and intervening grooves. Spire hidden from view by the enveloping final whorl [image8]; a slight bump on the posterior end may indicate its position.Ventral surface white with a slit aperture.On the rest of the shell the ridges are pinkish white with pink to dark pink intervening grooves, and there are three dark marks of varying intensity on the dorsum [3].
Juvenile shells
White flimsy shell [13]. Up to 12 mm high (longest dimension of shell). Last stage juveniles [9] can be larger than early adults. Under 7mm high the juvenile shell [10] has a typical gastropod aperture and spire, and lacks any sign of ridges. At 10mm high [11] the spire is very small in proportion to the final whorl, the aperture is a slit, and white ridges are developing on the ventral surface. Shape more ovoid. At 12 mm high [12] the spire is even smaller in proportion to the final whorl, the aperture is a slit, and ridges are appearing on both ventral and dorsal surfaces. During transformation to adult, the spire is completely enveloped by the final whorl.
Body
The mantle is drawn out at the front of the animal into a cylindrical respiratory siphon with a slit down its anterior face. Head, smooth tentacles and siphon are orange in adults [1], with many yellow longitudinal lines on the dorsal surface of the foot [2], and yellow spots on the tentacles and siphon. The mantle, can envelope the whole shell [5], or be completely withdrawn [3]. It is greyish white, heavily marked with dark, often purplish, patches aligned with the shell grooves. Small yellow tubercles are scattered sparsely over its surface. The free edges of the mantle are orange.
Key identification features
Similar species
Trivia arctica
Ecology and behaviour
Sublittoral, and near LWS on rocky shores. On or under stones and rock ledges near its compound ascidian prey, including Diplosoma (EML), Botryllus (EML), Botrylloides (EML) and Polyclinum(EML). The mantle can emit acid in defence. Vase-shape egg capsules are inserted into ascidians up to the neck of the vase. When covered in water, echinospira larvae are released to drift in the water column before settling on the sea floor and transforming into the juvenile shell form.
Distribution and status

Shetland to Mediterranean (GBIF map).  Many records all round Britain and Ireland, but scarce or absent between Solway and (Welsh) Dee, and between Humber and Thames. Not uncommon on suitable rocky shores. Interactive map of uk distribution (NBN). 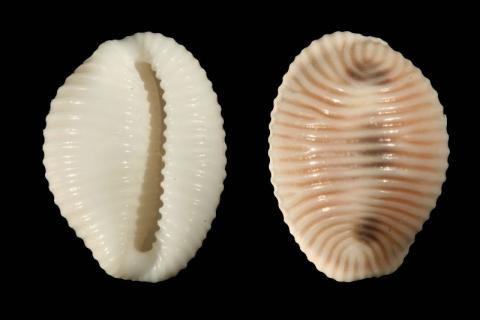 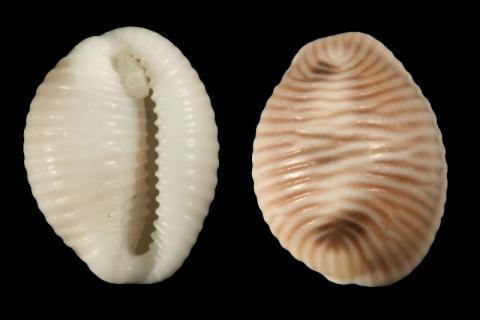 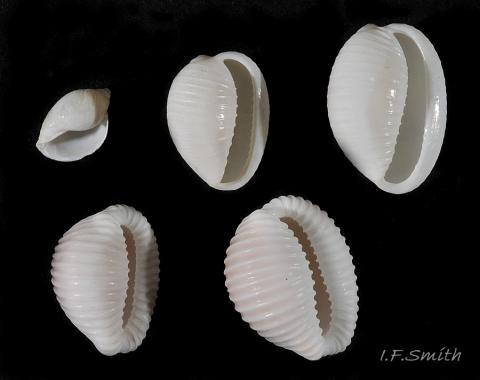 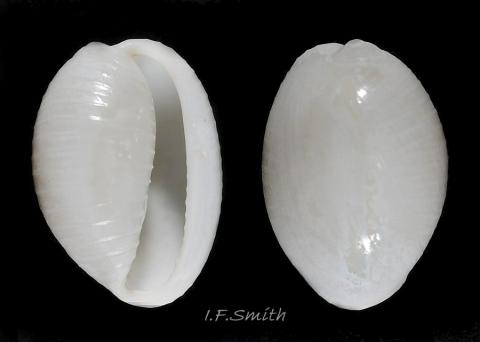 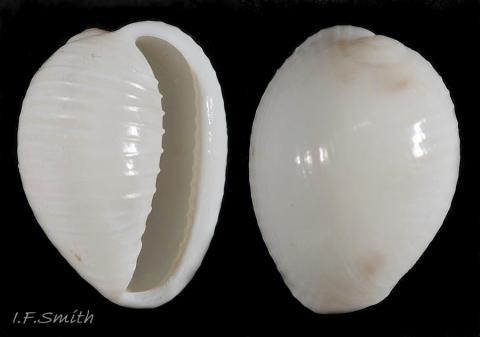 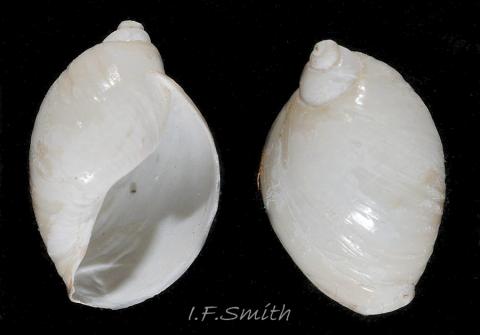 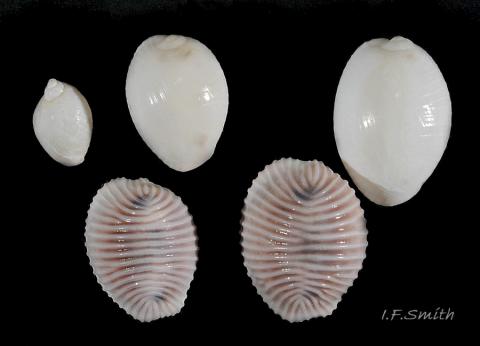 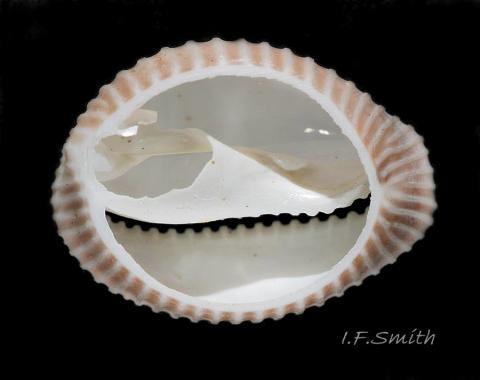 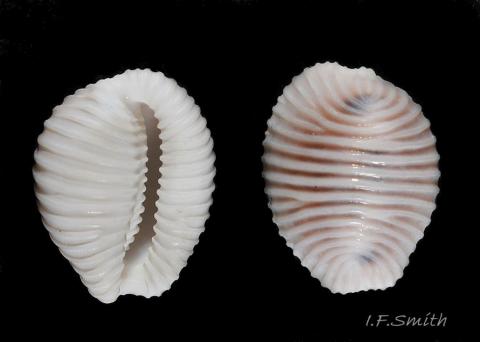 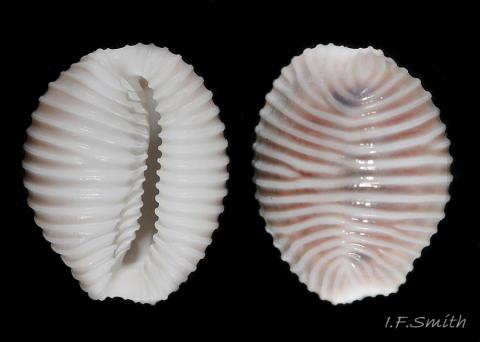 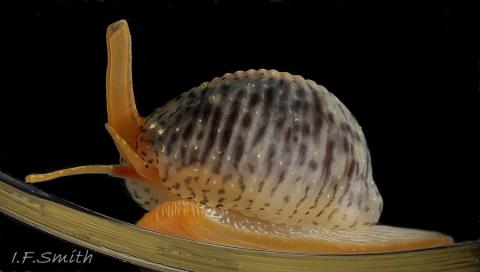 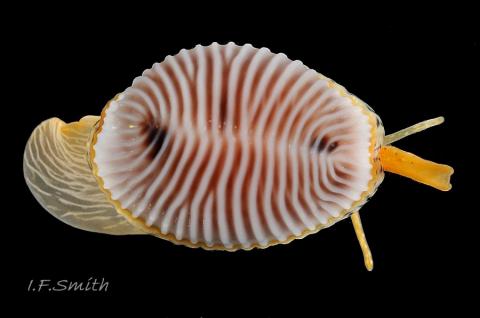