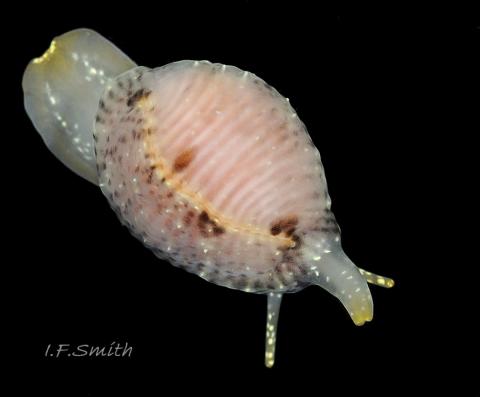 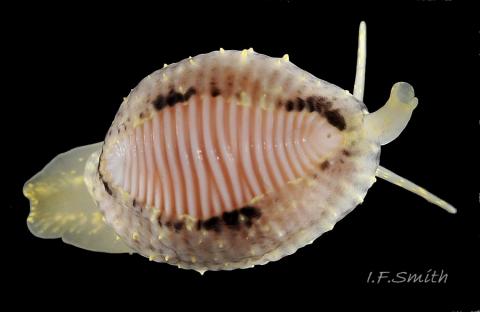 Vernacular names: Northern cowrie; Grottie-buckie (Scots); Cragen Fair y gogledd (Welsh);
Adult shell
Up to10mm high (longest dimension of shell). Typical ovoid cowrie shape solidly built with strong transverse ridges and intervening grooves. The spire is hidden from view by the enveloping final whorl. The ventral surface is white with a slit aperture. On the rest of the shell the ridges are pinkish white with pink to dark pink or buff intervening grooves. There are no dark marks on the dorsum [image4].
Juvenile shell
White flimsy shell. The early juvenile shell is smooth and has a typical gastropod aperture and spire. As it grows the spire is completely enveloped by the final whorl.
Body
The mantle is drawn out at the front of the animal into a cylindrical respiratory siphon with a slit down its anterior face. Foot [3], head, smooth tentacles and siphon are yellowish white [2] in adults, with some lemon-yellow and / or opaque white marks on the dorsal surface of the foot, and lemon-yellow and  / or white spots on the tentacles and siphon.The mantle can envelope the whole shell, or be completely withdrawn [5]. It is greyish white, with few dark marks except for black blotches often near the edge of the mantle [1]. Small yellow tubercles are scattered sparsely over its surface. The free edges of the mantle have a fine yellow border.
Key identification features
Similar species
Trivia monacha
Ecology and behaviour
Mainly sublittoral, but occurs near LWS on some rocky shores.Near its compound ascidian prey. The mantle can emit acid in defence. Vase-shape egg capsules are inserted into ascidians up to the neck of the vase. When covered in water, echinospira larvae are released to drift in the water column before settling on the sea floor and transforming into the juvenile shell form.
Distribution and status 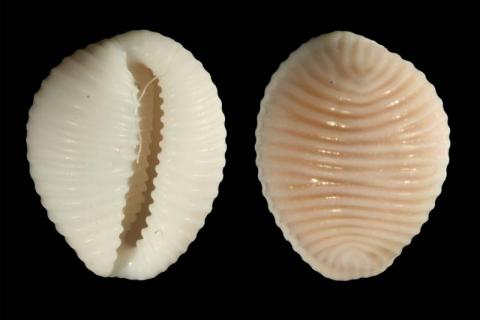 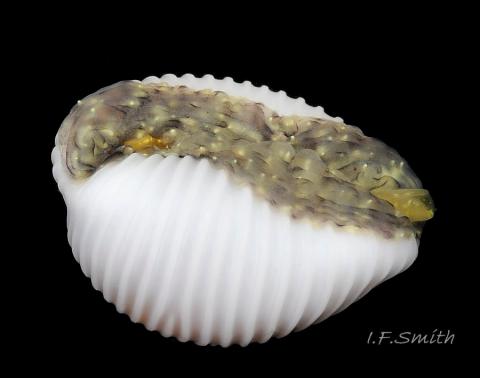 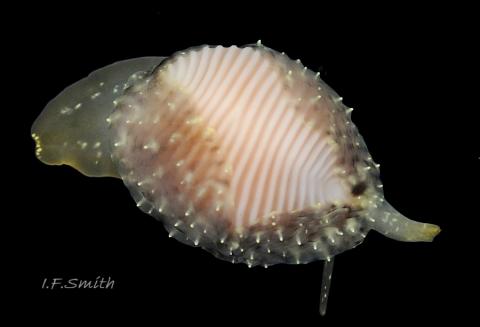 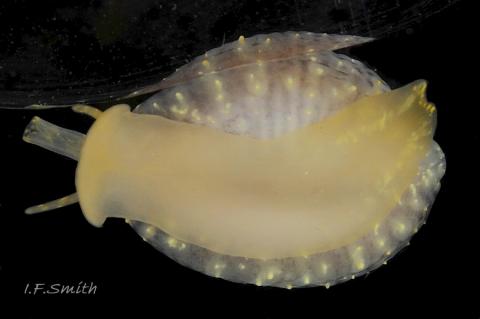