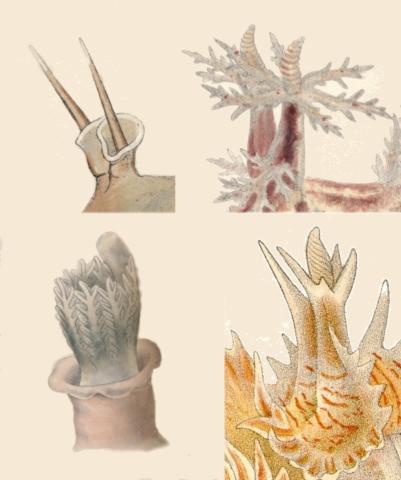 Dendronotacea (2011, mostly in superfamily Tritoniodea) are distinguished from other nudibranch sea slugs by having well developed basal sheaths into which their rhinophores can be retracted. The sheaths are often elaborately decorated.
There are no oral tentacles, but the frontal margin of the head is usually extended into an oral veil or flattened lobes.
There is a dorso-lateral ridge along either side of the body with various processes rising from it, which sometimes resemble the cerata of aeolid nudibranchs.
They feed on Cnidaria , but very few make defensive use of the nematocysts (sting capsules) of their prey.
Spawn is usually laid in lines or ribbons which are often convoluted or coiled. Shelled larvae, called veligers, hatch and swim in the plankton with the aid of cilia on two flaps called the velum. After a week or two they settle on the sea bed, lose their tiny shells and transform into adults.
Current taxonomy (see links below) has separated Embletonia and Doto spp. from the Tritonoidea into the category of unassigned Dexiarchia. They can be mistaken for aeolid nudibranchs because they have cerata on their backs. But, unlike aeolids, Doto spp. have retractile rhinophores with basal sheaths, tubercles on their cerata and no cnidosacs in which to store the nematocysts of their prey. Embletonia is the only British species of the Dendronotacea which lacks a rhinophore sheath, and its relationship to the other species is uncertain.