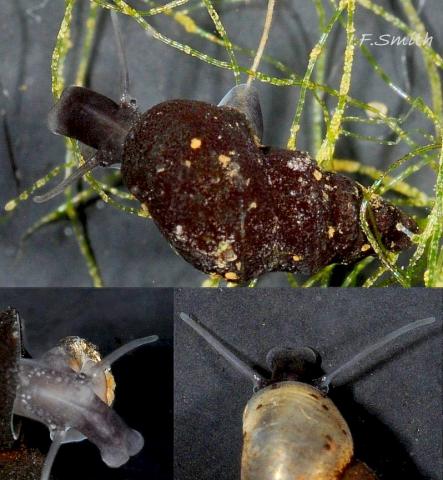 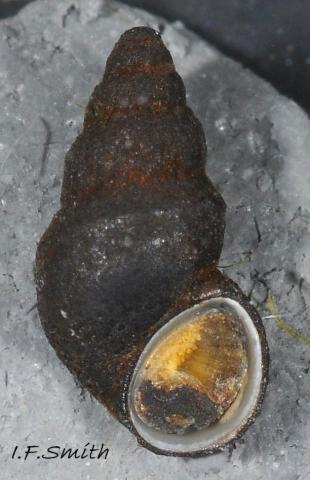 Shell
Usually up to 5mm high, sometimes 5.5mm (6mm in California). Conical spire, whorls rounded in profile [image1]. Some have a spiral keel [2], occasionally with bristles, running round all whorls which makes the shell outline stouter, especially when covered by encrustations. Small specimens have proportionately shorter spires, and only the smallest, under 2mm, usually have an open umbilical chink [3]. Shell translucent yellowish horn-colour [4], often only visible on most recent whorl of still growing specimens. Otherwise, colour very often concealed by blackish encrustations which may turn rust red [5] on dead shells. Distinct sutures may be obscured by encrustation. Adapical angle of aperture rounded and stands out from adjacent whorl [3]. Aperture lip thickened on adults (shell height about 4mm and more). Aperture outline of juveniles similar to adults. Aperture closed by operculum [2].
Body
Flesh greyish white, translucent [6]. Anterior of foot dorsally light grey. Extensive white pigment marks on sides of foot and posterior of head, with a few white marks extending to the eye [12]. Sole translucent white [8]. Head has long mobile tentacles [4] which frequently extend and contract. Tentacles are translucent light grey, darkest dorsally except, often, for a fine faint white medial line [7] & [10]. Usually, there is no other white pigment on the tentacles apart from a small distinct patch in front of the eye [8]. No black subterminal band or mark on the tentacles. The parts of the head usually visible, i.e. the area between the tentacles and the dorsum of the snout, are entirely grey or black apart from a pale area at the tip of the snout and, often, an indistinct paler medial dorsal strip [9]. The dorsum of the snout is sometimes slightly wrinkled [10] as it moves. Males, extremely rare, have flexed penis with longitudinal band of wavy white on grey [13].

Although one of the mainly marine Prosobranchia with usual ctenidium [7] and operculum [2], P. antipodarum lives primarily in flowing fresh water [11], but also in brackish ditches and lagoons to 17 p.p.t. salinity. On soft, hard, vegetated or bare substrate, feeding on detritus. Can be found floating under surface of water, perhaps to feed on micro-organisms in the neuston. Often at high densities. Ovoviviparous, so no spawn or veliger stage. Earliest stage outside parent is small snail, about 1mm shell height. Great majority of populations in Britain, Europe and USA have no males, only parthenogenetic females [6]. Males, when present, rarely exceed 2 per cent of a sample, but up to 20 percent in North-West corner of Meirionnydd, Wales [13] (Wallace, 1985). 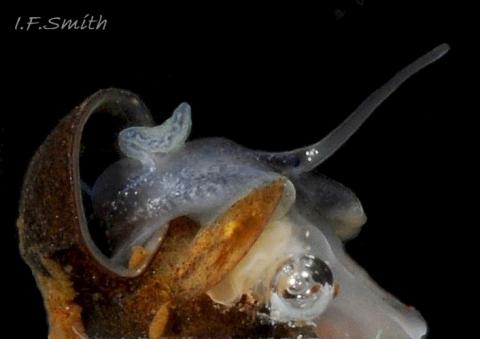 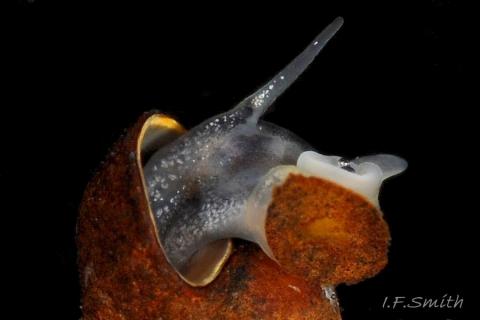 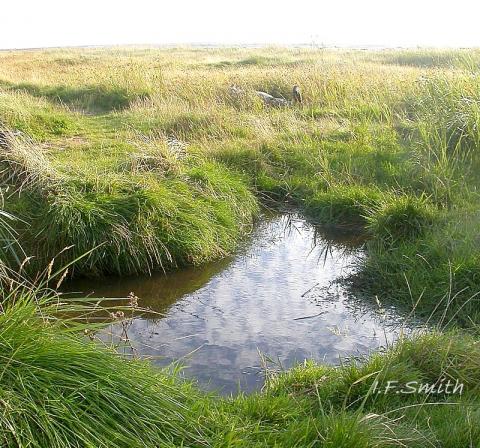 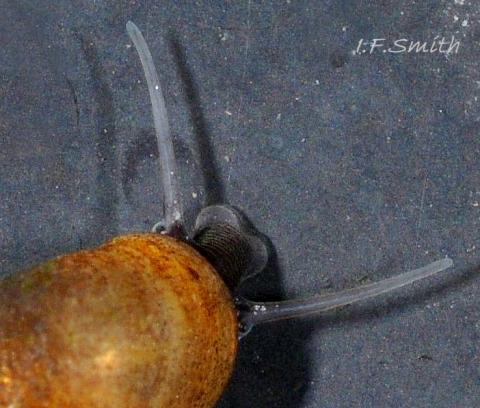 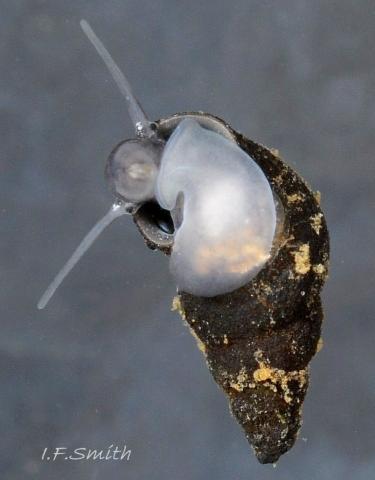 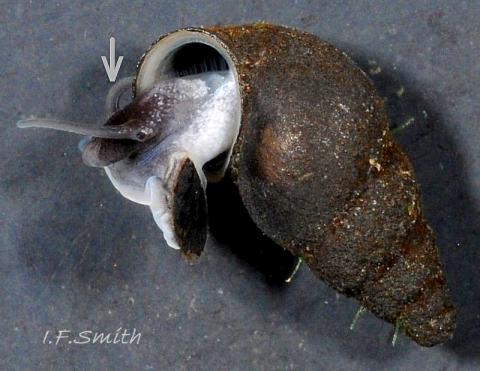 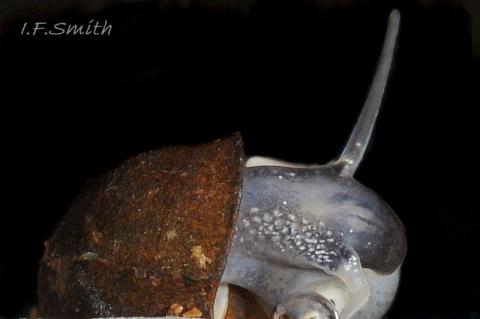 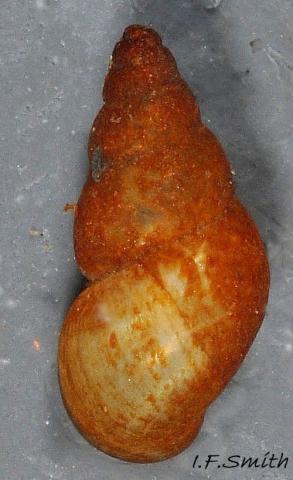 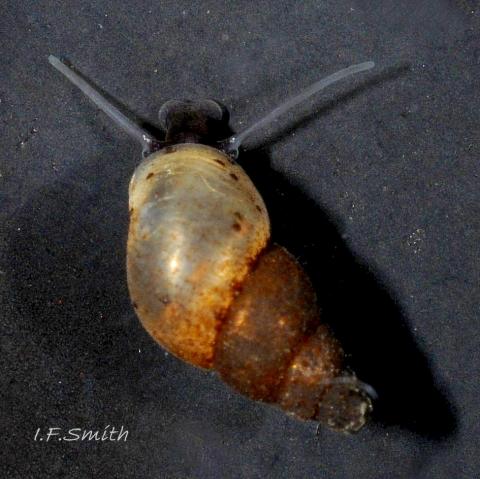 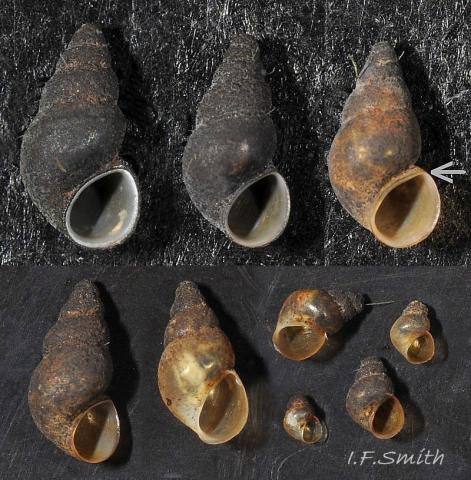 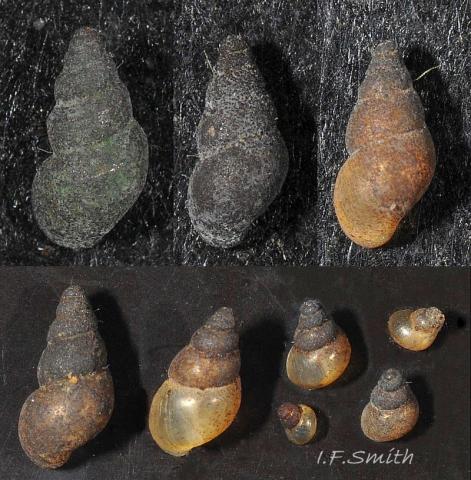