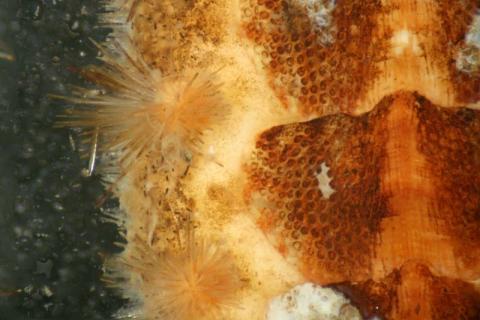 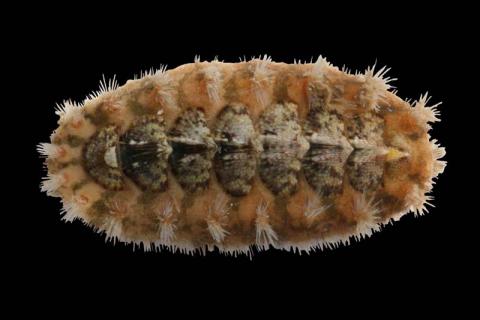 Size: Up to about 34mm long. Shape: Very broad girdle with the shell making up 40-50% of the width. Valves are relatively flat, with a very slight  keel. Shell colour: The valves are coloured olive green usually mottled with varying degrees of brown, orange, yellow, pink or white. Sculpture: Conspicuous surface granulation of the lateral areas but very variable ranging in shape from oval or tear drop and can be sparse or densely packed. Girdle: Has 18 conspicuous tufts of colourless bristles (up to about 1mm in length). Animal: Gills confined to the latter half of the animal (merobranch).

The eight valves are relatively strong and include notches on the areas where the valves embed in the girdle; five notches in the head valve and two in each of the rest. The lateral areas of the valves have conspicuous surface granulation though this is absent from the central area of each of the intermediate valves. The granulation is quite variable between, and even within, populations varying in shape from oval or tear drop shaped and sparse to densely packed. The valves are coloured olive green usually mottled with varying degrees of brown, orange, yellow, pink or white. When removed the intermediate valves are relatively flat with only a slight keel.

The wide fleshy girdle possesses 18 conspicuous tufts of colourless bristles (up to about 1mm in length). The remainder is densely covered by short spines (0.025-0.030mm in length) and long curved ones (up to about 0.150mm). The edge of the girdle is fringed by a row of spines about 0.350mm in length.

NOTE: Some authors recognise a separate species, Acanthochitona discrepans, on the basis of the degree of girdle spiculation and the shape and density of the granulation of the valves. However, there is huge variation in these characteristics with many intermediates making it impossible to separate on these characteristics alone. As a result it is not considered as a separate species here.

Lives on the underside of rocks and boulders usually lightly embedded in sand or gravel. It feeds by grazing material from the rock surface using its radula. Most common in the low shore or shallow subtidal areas but can occur to a depth of 50m.

Occurs from Norway to the Mediterranean and Adriatic seas [GBIF map]. It is found all around the coasts of Britain and Ireland and is not uncommon. While it sometimes occurs in very high densities it more generally found in relatively low numbers.