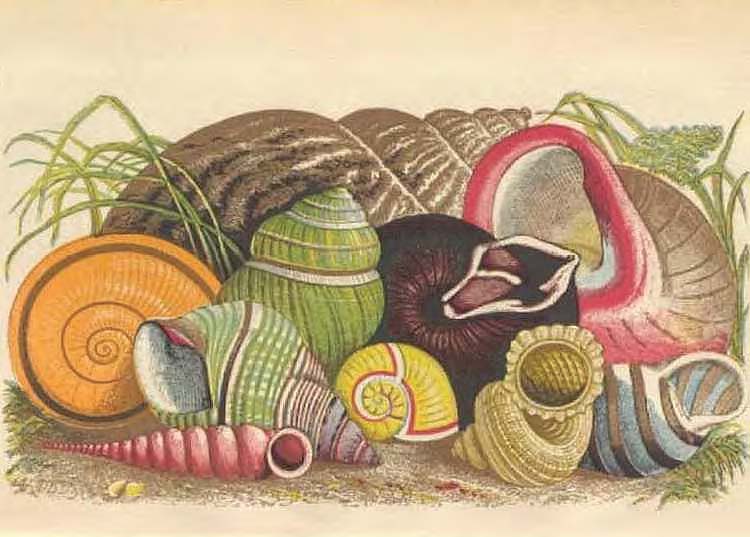 Peter Dance, in his recent fascinating book of conchological anecdotes, “Out of My Shell” (C-Shells-3, Inc., 2005), devotes a chapter to books about shells for children, in which he mentions a book entitled “Frank’s search for Sea Shells”(1866). Having recently been given the opportunity by Peter to read this compelling story, I tried to find out a little more about the mystery author “H.F.P.” and the second book by the same author “Rambles after Land Shells.” Both books were published by the American Tract Society (Boston, U.S.A.) the latter in fact being the first published, in 1863. They are about a twelve year old boy called Frank and his adventures, whose knowledgeable relatives open up to his enquiring mind the whole new world of molluscs. The books are not written in the rather dry, uninteresting way that often characterises 19th century children’s books. On the contrary the stories are exciting, the writing knowledgeable (for the time) and easy to read. Since the books were produced by a religious publisher there are many analogies and it is clear here that molluscs were also placed on the earth in order to teach mankind about God! But there are also other fascinating snippets of the time, as the American Civil war rages in the background.
A little research on the internet revealed the author to be Helen Fitch Parker. She was born Helene Eliza Fitch in 1827 and educated at Auburn female seminary, New York State. Little is known about her life, however she was married in 1852. There is some confusion about who her husband was, some sources say Samuel Parker (1779-1866) and another his son Henry Webster Parker (born 1824), both of whom were Presbyterian clergyman. Due to the disparity of the dates I have assumed here that Helen’s husband was Henry. Henry was also a scientist, for after their marriage he went to study at the Lawrence scientific school of Harvard University, later in the 1870’s becoming professor of mental science and natural history at two colleges. In addition he also published two volumes of poetry. His father, Samuel Parker was also a missionary to the then new territory of Oregon. It is obvious that an interest in natural history and conchology in particular ran in this family, since in 1851 Samuel Parker presented a “Description of a new Species of Helix” to the American Association for the Advancement of Science. Apart from the two books relating to shells, Helen also published five further books of a Christian nature as well as “Arthur’s Aquarium” in 1872. She died in Amhurst, Massachusetts on 4th December 1874.
“Rambles after Land Shells” is fortunately available to read on-line at more than one location (web address at end).
One of the things that is striking about this short book (172 pages) is its coloured frontispiece (reproduced here), of which the author says “the shells of our temperate zone are homely in comparison with those of the tropics, which can be procured in exchange or by purchase. To illustrate the subject, a few tropical land shells have been drawn and coloured from nature for the frontispiece of this volume.” The shells are from a number of well recognisable families such as the Annulariidae, Achatinidae, Acavidae, Camaenidae and Orthalicidae and are arranged artistically amongst vegetation.
In the first chapter of the book, Frank is looking at the books in his grandfather’s library (possibly a depiction of Samuel Parker’s library?). He is surprised when his mother mentions to him that there are molluscs with shells that live on the land. She then says to him:
‘“In England, they are found in the hedges, ditches, old ruined walls, in the gardens, and even in the cellars. Bring me the thin volume next the one at which you were looking, and you shall see what I mean. There.” said she, turning to the plates of the British Mollusca [presumably those in the fourth volume of “A History of British Mollusca...” E. Forbes and S. Hanley 1853], are they not beautiful?”
“How I wish I lived in England!” he [Frank] said, looking wistfully at them. “What would you do?” “I should go into the garden this minute, and bring you a handful.”’
Frank later discovers the delights of the shells of his own land (and also incidentally further afield to places like St Helena and China) and also does travel briefly to the U.K!