Despite the brilliant colours and distinctive forms of many sea slugs, they are often difficult to detect on the shore. Without the support of water, they contract into featureless blobs, or collapse into gelatinous smears. Their colours may match the encrusting organisms on which they lie (figure 1), their lack of shell enables them to hide in tight crevices, and the small size of many can defeat detection without the aid of magnification. 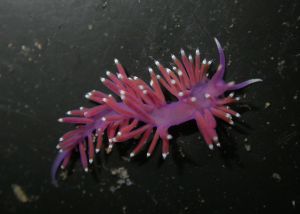 figure 1: In its collapsed state, this 20mm Flabellina pedata was initially mistaken for a hydroid.

Most sea slugs eat only a few related food species, so search can be narrowed by finding and examining the prey and adjacent substrate. The main food groups and the approximate percentage of British sea slugs that eat them are: hydroids 35%, bryozoans 25%, sea squirts 10%, algae 10%, sponges 10%, sea anemones 5%, miscellaneous 5%.

To maximize the chance of success, select a shore suitable for most of the food groups, i.e. one with some hard substrate that is sheltered from strong waves, and which has strong currents to carry nutrients to the prey organisms. Such conditions can be found on narrow straits between islands (figure 2), and narrow entrances to bottle-neck bays, lochs and estuaries (see figure 3). Sometimes, sheltered sites have smothering mud deposited on the upper and middle shore, but strong currents may keep lower levels clear. Very strong currents loaded with sand can deter settlement of sessile species, apart from barnacles, but good conditions are frequently found nearby. 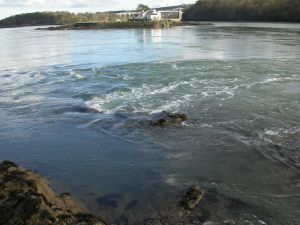 figure 2: Strong current striking the shore of the Menai Strait. The greatest diversity of species will be found at low water of a spring tide; the lowest occurring in January – April and July – October. 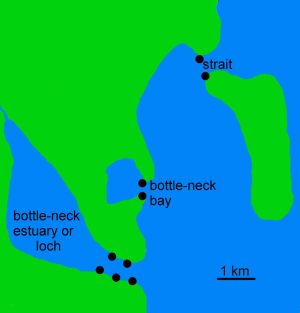 Many slug species have an annual life cycle and are present as adults and prominent spawn masses for limited periods. For example, Onchidoris bilamellata: 40 mm adults and spawn are abundant on some sheltered barnacle-rich shores from late January to early March (figure 4). 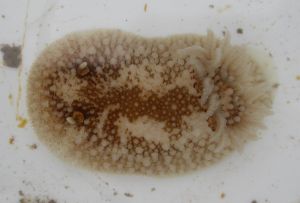 figure 4: Onchodoris bilamellata were easily found by torch on a January night LWS on the Mersey Estuary because of the size and abundance of the adults and spawn.

Out of their adult seasons, these and many other species are unobtrusive juveniles, but they can be found with appropriate techniques. 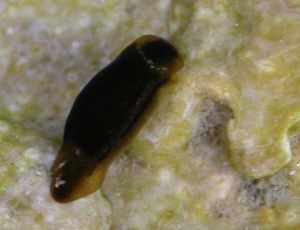 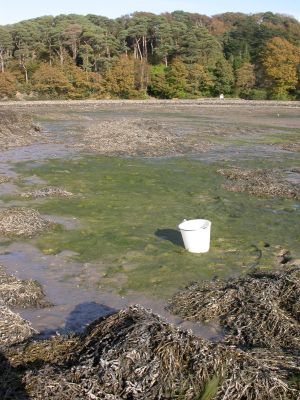 figure 6: Mat of Vaucheria supporting Limapontia depressa on a mud flat in the Menai Strait

Sea slugs measuring 10mm, or more, may be discerned by the practised eye on the substrate, or under stones, near prey (figures 7-8 and front cover). Many give off substances that harm other species, so place large and medium specimens in individual pots. 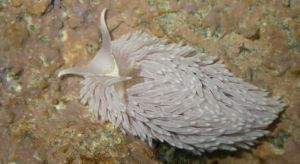 figure 7: Because of its large size Aeolidia papillosa is often discovered, even when not numerous. 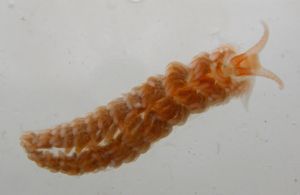 figure 8: Aeolidiella sanguinea is comparatively large, so this first recorded Welsh specimen was easily detected on the Menai shore. 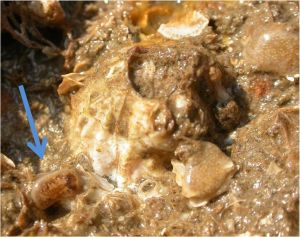 figure 9: 4mm juvenile Onchodoris bilamellata in September (arrowed bottom left), missed on the shore and only detected while examining this macro image of a barnacle at LWS.

Smaller species and juveniles, which are often much more numerous than adults, are easily missed (figure 9). If you need spectacles to read, put a pair on an elasticated sports band so they can be worn on the forehead and pulled down when needed. PVC waterproofs will help you to lie down on wet or muddy shores for close examination of substrate and pools.

A hand magnifier, about x3, is useful on the shore, but the brief emergence of the lower levels makes time precious. Collection of suitable samples for unhurried examination later in sea water, where the slugs will resume shape, under a binocular microscope at x5 and x10 will often double the number of species found.

Hydroids are often the most productive prey group for slug searching. Most hydroids are primarily sublittoral, so work as low down the shore as the tide permits to find stragglers, often undersized, that have found a toe-hold in the sublittoral fringe. They grow on rock, stones, other hard objects and seaweeds in moist shaded situations. Out of water, small hydroids lie flat and are easily missed, so pay special attention to pools, and, if the sea is calm, wade to find still erect specimens in a few cm of water.

Large specimens of hydroid are often washed up, but these are usually dead and devoid of sea slugs.

Medium length hydroids may be found on favoured intertidal sites like those described above. These can be individually plucked and taken home for inspection (figure 10), but intertidal specimens are often short and need to be scraped off with a knife. Plucked and scraped samples will be damaged and need examination within a couple of days before decay takes over. 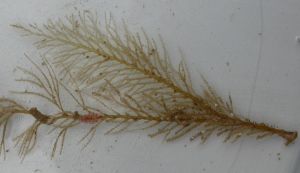 However, many sea slugs hide at the base of hydroids or in crevices and will be missed, or damaged by scraping. To avoid this, look for portable stones and other hard objects (figures 11 and 12) which have a good growth of hydroid on them. They can be transported in 500g margarine pots with about 1cm of seawater to keep them moist. 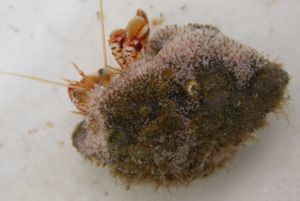 figure 11: Cuthona nana was found by microscope on the Hydractinia coating this hermit crab. 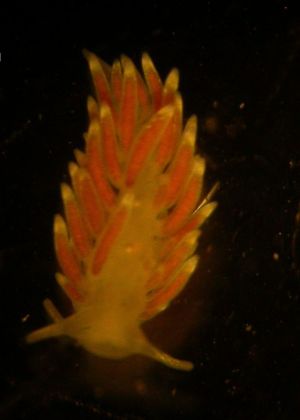 At home, fill the pots with fresh seawater and examine them under a binocular microscope. Often small spawn packages are the first sign that a tiny species such as Tergipes tergipes (figure 13) is present. 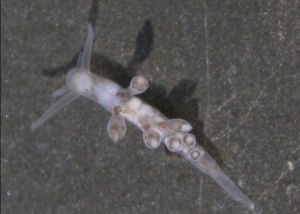 Some specimens may remain concealed for up to ten days, so re-inspect the pots daily for as long as the water stays fresh. When it eventually starts to stale you may find that slugs emerge onto the container sides, or crawl on the underside of the water surface (figures 14, 20). 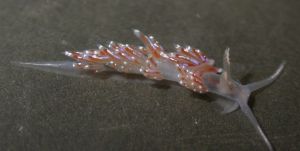 figure 14: Facelina auriculata (10mm in length) discovered, after ten days, crawling on the underside of the water surface of a pot containing two hydroid covered stones.

Tiny specimens can be scooped up with a collector made by cutting a transparent jointed drinking straw into a “hockey stick” with a 5cm handle and 1cm scoop (figure 15). The slugs can then be gently blown out. 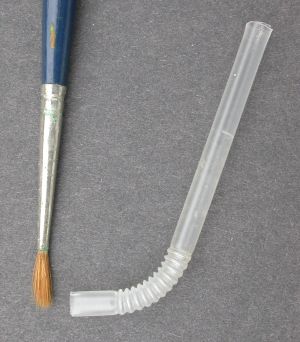 Seaweed, especially Fucus serratus and Laminaria, with good growths of hydroid (figure 16) can be gathered for microscopic examination of one frond at a time in a plastic bacon box. Transport the weed damp and only immerse it in water when ready to examine it, as the water may deteriorate quickly. Ascophyllum often has hydroid growth, but stales rapidly and, because it occurs higher up the shore, does not usually have many slugs. 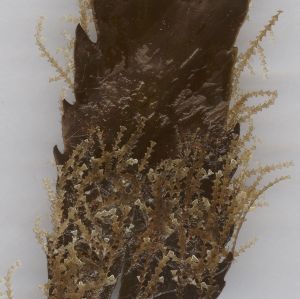 Prey other than hydroids

Bryozoans (sea-mats), colonial sea-squirts and sponges are easier to detect than collapsed hydroids, but less suitable for plucking or scraping. Collection of stones and weeds with them on for later examination may produce results (figure 17). Shaking encrusted weed in a bucket of sea water may dislodge some slugs, but many are well adapted to cling on in turbulent water. 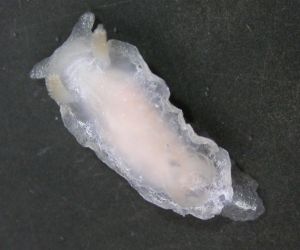 Sacoglossans feed on a limited number of, mainly green, algae such as Cladophora, Vaucheria, Codium and Griffithsia. Most are filamentous, and it can be difficult to dislodge slugs from them. An exception is Codium. Where it occurs on the shore, e.g. Orkney, it is often possible to obtain about a dozen Elysia viridis by shaking a single plant in a bucket of water.

Cladophora occurs in pools on most rocky shores. If Limapontia capitata and/or L. senestra cannot be detected in situ, take home a 500g margarine tub full of damp Cladophora and spread it in a light coloured washing up bowl of sea water. Specimens, including juveniles, may be spotted near the surface and show up easily when they crawl on the side of the bowl.

If, in summer or autumn, the 6mm dark jelly blobs that are adult Limapontia depressa (figure 18) cannot be seen on blankets of Vaucheria on damp mud flats, take a sample of the alga and treat as for Cladophora, above. In April they are 2mm juveniles, but often easy to find as they occur in hundreds on bare mud both in and out of water (figure 19). 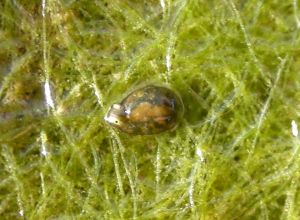 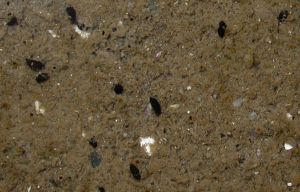 figure 19: Juvenile 2mm Limapontia depressa on mud in April. Alderia modesta also occurs on Vaucheria, but where it remains submerged in pools on saltings. In late summer and autumn Runcina coronata (figure 5) occurs as easily missed juveniles. It can often be found by collecting samples of small species of red seaweed from sheltered waters and pools and treating them as for Cladophora, above.

The effect of using the above techniques can be judged from the following examples of recording at low water spring tide on the Mersey Estuary and at sites on the Menai Strait in North Wales.

Note that samples of particular food organisms sometimes fortuitously included slug species that do not consume them.

Found under microscope at x5 and x10:

Found under microscope at x5 and x10:

Found under microscope at X5 and X10:

Very strong current, sandy shore with some rocks and stones. Few weeds, hydroids or other encrusting organisms, apart from barnacles, probably because of sand scouring.

Many of the techniques above were described by Cuthbert Collingwood who sought sea slugs on the Mersey Estuary around 1860. One entry in his unpublished journal says:

“Feb. 20th 1860. Mr Moore sent a man to Egremont to bring over some stones covered with Laomedea gelatinosa. ...On these stones being placed in water, they were found to swarm with young Nudibranchs, among which I detected many young Doto coronata, Eolis despecta, and several of the Eolis concinna... and Eolis exiguum.”

So don’t forget to send your man for material at the next spring tide... 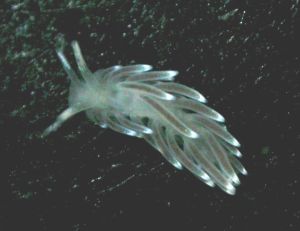 Samples should be examined as soon as possible as some will survive only briefly, though others may last for months.

To prolong their lives:

1. Keep them as cool as possible; in an unheated shady room, outbuilding, or lean-to, or in a refrigerator (best). Deterioration is often rapid above 15°C.

3. To maximise aeration, keep samples damp, but not immersed, during transport. At home, keep them in uncrowded shallow water.

4. If deterioration starts, remove decayed matter and change the water, but take care not to lose any small specimens crawling on the underside of the surface.

5. Release surviving specimens at your next visit to the same location or to a similar habitat where the species occur.

1. Gather water at a site away from fresh water or pollution inflow, with close road access, shelter from waves and, if possible, a slipway.

2. Collect it at high tide to minimize carrying.

3. While filling, wear Wellington boots and waterproofs. It may be easier to gather water in a bucket with a lip and then pour it into carriers with lids.

4. A balanced load of 10 litres on each hand is easier to carry than 20 litres on one. This should be enough to process samples from two or three shore visits.

5. Store the water in dark opaque containers to deter algae and micro-organisms.

6. If there is organic matter in the water, leave it to settle and decant off the cleared water. If necessary, pass it through a coffee filter paper. It should remain usable for months or years.

7. Store the water outside in shade or in an outbuilding. In warm weather, cool it in a refrigerator before use.