Report of the Hon. Conservation officer 2008

A selection of some of the key items of interest from the year 2008 are described below.

Has been given to many individuals and organisations including specimen identification and advice on habitat management. One exciting specimen confirmation was that of P. Wilson’s new vice-county record of Pisidium tenuilineatum for Cambridgeshire.

Assistance was given in the production of (1) a Local Species Action Plan (LSAP) for the depressed river mussel Pseudanodonta complanata for Bedfordshire and (2) information provided to give assistance with a review of the Lincolnshire BAP river mussels (Pseudanodonta complanata and the Witham orb mussel Sphaerium solidum) for the Lincolnshire Biodiversity Partnership.

The production of a molluscan wildlife report for this publication continued with the inclusion of submissions in April and October 2008. Key items in the reports included (1) news that the Roman snail, had been added to the Wildlife & Countryside Act (see below); a review of a new publication documenting recent work on all of the Vertigo species of Norfolk; news of a newly discovered Vertigo moulinsiana population in an unusual habitat in Wales; (2) interesting key points from the marine and non-marine 2007 Officers’ reports included mention of the wealth of new Irish non-marine records; the rediscovery of Segmentina nitida in Yorkshire and the first discovery of a living population of Heleobia stagnorum; news of a new Conchological Society non-marine species checklist and the designation of a new SAC for Vertigo angustior at Garron Point in Aberdeenshire.

The final upgrading process took place in the first months of 2008 and involved contributions from a wide range of experts both within and outside the Society. At the end of 2008 the definitions of the priority habitats and the information supporting the selection of the priority species were published on the UK BAP website which can be viewed by following the links on the UK BAP home page http://www.ukbap.org.uk.

In early December 2008 the JNCC in conjunction with the Biodiversity and Reporting and Information Group (BRIG) and the Biodiversity Research Advisory Group (BRAG) ran a workshop in Peterborough to try to prioritise immediate actions for BAP priority species. The project looked at some of the actions identified for the 1149 BAP priority species. The aim of the workshop, which I attended, was to rationalise the signposting database, produced as part of the UK BAP process, into actions highlighting:

The workshop sought to identify key knowledge gaps for the BAP species and those actions which are the ones essential for taking forward the conservation of a species now and also where groups of species plans could be combined. Time was spent working in groups (with all invertebrate attendees working together) to examine the actions submitted earlier in 2008. Ideas taken from the workshop will be presented at a BRIG meeting early in 2009.

The last months of 2008 saw several Society members commenting on the annual reviews for the BAP priority molluscs (only the first ‘tranche’ of species and not the new priority species added in 2007). Review documents are compiled by lead partners working for various government bodies such as Natural England, Countryside Council for Wales and the Environment Agency.

Work on the 2008 revision of the Red Data lists is underway; it is hoped that a submission will be completed before the end of 2009.

Natural England were given habitat management advice to assist them in dealing with applications from landowners / managers with populations of Anisus vorticulus on their land. As A. vorticulus is a European Protected Species (EUHSD Annex IV), management operations actually or potentially affecting this snail now need to be approved and then licensed.

In early March 2008 it was learnt that Helix pomatia had been added to Schedule 5 of the Wildlife and Countryside Act 1981 (see figure). From 6th April 2008 wild caught Roman Snails were protected from intentional taking, injury or killing as well as possession and sale (the snails are in good company for they will also be joined by other beneficiaries of the 4th Quinquennial Review such as water vole, spiny and short-snouted seahorses and angel sharks!). The whole saga started way back at the end of 2001 when the Joint Nature Conservation Committee (JNCC) invited the Conchological Society to submit proposals regarding the fourth review. After consultations with Society members I sent proposals for the addition of the two species H. pomatia and the freshwater bivalve Sphaerium solidum together with the removal of two others, Paludinella littorina and the Thyasira gouldi. In December 2002 it was learnt that JNCC were recommending that H. pomatia be added to Schedule 5, although they rejected the addition of Sphaerium solidum (pleasingly it now has BAP priority status as a result of our BAP campaign!) and had also decided not to remove any species from the Act. All seemed well until, following a long wait; we learnt in early 2005 that DEFRA, whilst not rejecting H. pomatia, had nevertheless placed it into a 'neutral' category pending wider consultations. They were concerned about the commercial impact upon the restaurant trade. ‘Informed opinion’ believed that this would rapidly lead to Roman Snails being dropped from WCA consideration. At this point I embarked upon an urgent fact finding exercise to discover exactly what 'top' restaurants actually served in the 'escargots' line. Restaurant suppliers were also contacted to reveal where they got their snails. The results were very interesting and showed that, of the outlets contacted, none used 'native' wild-caught pomatia. A robust defence was sent to DEFRA together with the initial proposal documents. We were also given valuable support by Matt Shardlow of Buglife. A three year wait then followed resulting in the announcement of WCA acceptance in March 2008. Of course legal protection is not necessarily going to guarantee instant protection. The general public now need to know that these snails are now 'off-limits' for the pot. It is hoped that DEFRA may be able to produce leaflets and other publicity material to publicise this protection (without any disclosure of Roman Snail locations) and a partner role for the Society will be discussed in 2009.

In early May 2008 we learnt that JNCC were providing opportunities for comment on revisions to Schedule 5 of the Wildlife and Countryside Act, 1981 (only weeks after delivering the good news on Helix pomatia – an outcome of the 4th Quinquennial Review which started in 2001!). We only had until 21st May to return submissions, but fortunately we were able to work together with Buglife. After consultation with Robert Cameron we were able to include our recommendations within a larger Buglife proposal covering many other invertebrate species. Most molluscan recommendations repeat proposals that had already be included in our response to the 4th Quinquennial Review. The latest Molluscan proposals are:- Species: 5th Quinquennial Review Rationale for recommendation: recommendation:

In March 2008 the Conchological Society gave its endorsement (together with many other member organisations of Invertebrate Link) to a statement detailing the appropriate role of legislation in controlling activities likely to harm specified species of terrestrial and freshwater invertebrates, with particular reference to taking and killing. The full document can be viewed on the Invertebrate Link website:

Associations with other organisations:

The Conservation Officer continues to attend conservation committee meetings of The Sussex Wildlife Trust. I wrote a further report highlighting new vice-county molluscan finds made during 2008 for the ‘Adastra’ magazine. I was also able to publicise details of the forthcoming Open University ‘Megalab’ initiative in order to encourage members throughout the county to get out in 2009 and record and then submit details of Cepaea spp polymorphisms (Adastra 2008, Sussex Biodiversity Record Centre, Henfield, West Sussex) . 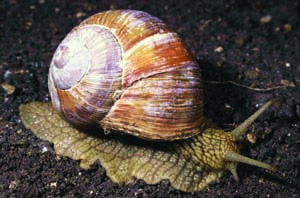