Colour polymorphism in gastropods has been the subject of numerous detailed studies and it is clear that various factors are involved. For example it has been shown that in Littorina saxatilis (Olivi, 1792) colour morphs are genetically established and the variation in frequency of a particular colour morph in different habitats is determined by natural selection through the agency of visual predators (Ekendahl & Johannesson, 1997). With the trochid Austrocochlea constricta (Lamarck, 1822), on the other hand, experiments have established that variation in colour pattern is influenced by diet (Underwood & Creese, 1976). Some nerite species exhibit an especially wide range of colour patterns, often within a single population subject to broadly similar environmental conditions. Grüneberg (1976, 1978, 1979 & 1982) carried out detailed studies of just such a variable species, Clithon (Pictoneritina) oualaniensis (Lesson, 1831). He eventually concluded that both genotypes and phenotypes were involved and that the wide range of colour patterns in this species resulted from the interaction of hereditary and environmental factors, for which he coined the term “pseudopolymorphism”.

In other nerite species the colour pattern usually varies within a narrow range but environmental influence can result in a more significant change. Gunderson and Minton (1978) carried out experiments with the Caribbean species Puperita pupa (Linné, 1758), which is a fairly common inhabitant of intertidal rock pools and has a distinctive pattern of zebra stripes (Fig. 1). The relationship between this species and Puperita tristis (d’Orbigny, 1842), which has a shell similar in shape to P. pupa but an entirely different colour pattern consisting of white dots on a black background (Fig. 2), had for some time been a matter of speculation with some authorities considering P. tristis to be a separate species and others regarding it as a subspecies or merely a colour morph of P. pupa. Gunderson and Minton found a colony of P. tristis in Jamaica living in freshwater pools above the tide line. They took specimens of P. pupa from saltwater pools and moved them to the P. tristis colony. The translocated specimens showed an abrupt change with new growth displaying the colour pattern typical of P. tristis. They also found that colonies living in pools with freshwater influence but within the splash zone, where the water was brackish, had an intermediate colour pattern with black lines which split and crossed giving an irregular netted appearance (Figs 3 & 4). These tests indicated that P. tristis was an ecophenotype of P. pupa and this was further substantiated by DNA analysis, which suggested that only one species was involved. Specimens of P. pupa, which show an abrupt change of colour pattern at some stage in the shell’s development, occur naturally, presumably as a result either of a variation in the salinity of its environment, for instance from a stream changing course, or the transportation of the mollusc to a different environment, for example by a storm. Figure 5 illustrates a change of colour pattern from the striped form of P. pupa to an intermediate form although, unfortunately, this change is not as dramatic as in the specimens resulting from Gunderson and Minton’s experiments and figured by them.

Most fossil molluscs lose their colour pattern during the process of fossilisation. In some families this is due, in part, to the shell being formed of aragonite, which is more soluble than calcite. In the Neritidae the shell is composed of crossed-lamellar aragonite with an outer layer of more stable calcite, which protects the colour pigments, and this is the only fossil family in which preservation of the colour pattern can confidently be expected (Hollingsworth & Barker, 1991). Some fossil species have a considerable range of colour patterns comparable to recent species such as C. oualaniensis. One example is Clithon pictus (Férussac, 1825) and figures 6 to 9 show a selection of colour patterns in specimens from the Aquitainian (Miocene, age approximately 20 million years) of south west France.

Fossil molluscs were often transported and sorted by currents prior to deposition in which case it is no longer possible to be sure where they were actually living. A good example is the well-known fossil shell bed, forming part of the Blackheath Beds (Early Eocene, age approximately 50 million years), at Abbey Wood, in the London Borough of Bexley. This bed is formed from an ancient shell-bank composed mainly of sand with flint pebbles and fossil molluscs and vertebrates. The molluscs are from a variety of habitats and consist of marine, brackish and freshwater species; the vertebrate remains include shark’s teeth and terrestrial mammal teeth. The most common neritid is Clithon (Pictoneritina) pisiformis (Férussac, 1823), which has a pattern of thin, dark, transverse lines on a light background (Fig. 12). The lines are waved or zigzag with the precise pattern varying from one individual to another. Rare specimens have three pale spiral bans around the shell (Fig. 10). Rundle (1971) in his definitive thesis on the mollusca of the Blackheath/Oldhaven Beds of Kent figured a similar specimen and considered it to be merely a variation in pattern from the more common form of C. pisiformis. This is supported by the specimen in Figure 11, in which the zigzag pattern in the initial part of the teleoconch abruptly changes in the body whorl to the banded form.

Another species which has both unbanded (Fig. 13) and banded (Fig. 14) forms is Clithon (Pictoneritina) planulatus (Edwards, 1866) from the Hatherwood Limestone which forms part of the Headon Hill Formation on the Isle of Wight (Late Eocene, age approximately 35 million years). In contrast to the Abbey Wood shell bed, the Hatherwood Limestone was laid down in a fairly stable environment. The lower limestone is thought to have formed mainly in freshwater marshes, although the basal bed indicates a brackish influence; the upper limestone represents slightly saline environments (Paul, 1989). C. planulatus is common at two levels: the basal bed of the lower limestone and the “Theodoxus planulatus Bed” in the upper limestone. Curry (1960) stated that about 50% of C. planulatus specimens were banded but this actually depends on the bed in which they occur. A sample, which Bill Pocock and I took from the basal bed at Headon Hill in 2006, produced 99% banded specimens; on the other hand, in the “Theodoxus planulatus Bed” the banded form is in the minority. Figure 15 shows a juvenile shell with a banded shell changing abruptly to an unbanded form but such examples are, in my experience rare, perhaps because of the environment at the time which would have given limited scope for molluscs to be transported to a different habitat. However in some deposits abrupt changes of colour pattern are not uncommon; for example figures 16 to 18 show colour pattern changes in Clithon (Pictoneritina) passyanus (Deshayes, 1864) from the Bartonian of Chavençon in the Paris Basin (Middle to Late Eocene, age approximately 40 million years).

Obviously with fossil gastropods it is not possible to carry out the same tests and experiments as with living material; indeed it is often impossible to establish exactly where and in what habitat the fossil specimen lived. However it is usually considered safe to assume in the case of fossil species which are closely related to recent species, that they occupied similar environments to their living relatives. Where a fossil nerite shows an abrupt change of colour pattern, as in Figures 11 and 15 to 18, it seems to me to be a reasonable assumption that this may well have been the result of a sudden change in some aspect of its environment, such as salinity as in the case of P. pupa. In some cases the change in colour pattern coincides with damage to the outer lip which would be consistent with violent movement during a storm.

I am very grateful to Daniel Ledon for supplying the specimens, which I have figured, from France.

GRÜNEBERG, H. 1979. A search for causes of polymorphism in Clithon (Pictoneritina) oualaniensis (Lesson). Proceedings of the Royal Society of London. 203: 379-386.

RUNDLE, A. J. 1971. The Mollusca of the Blackheath/Oldhaven Beds of Kent. Unpublished Thesis submitted to the University of Nottingham for the Degree of Doctor of Philosophy. 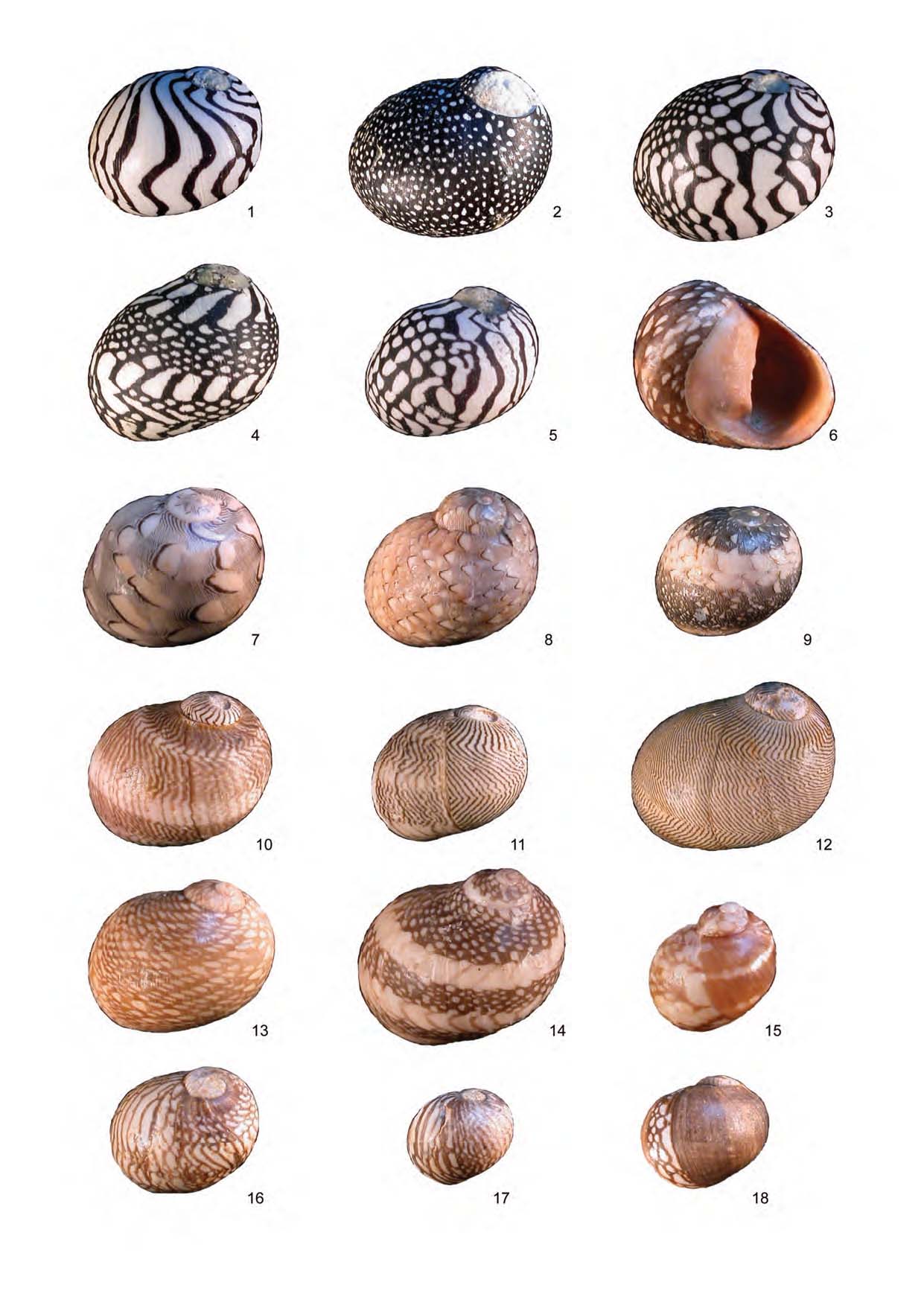