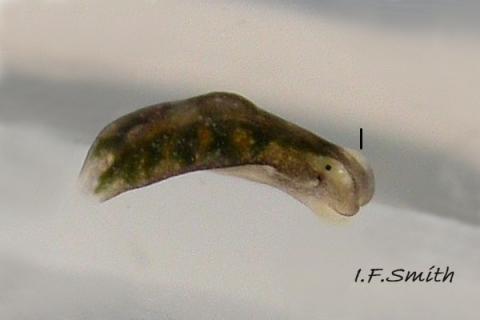 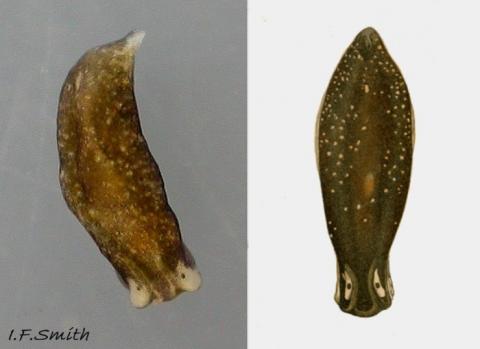 Body
Length to 6 mm. Outline broad oblong-ovate [image1], able to contract to mucus-coated spheroid [11]. Black [14], dark-brown [8], brown [1], pale-brown [12], chrome-yellow [2], or translucent grey-white showing the two dark-green [6] or yellow-white [4], lobed, branches of the digestive gland and brownish viscera. Colour dependant on diet as all forms tend to resemble each other if starved. Usually small white or pale yellow spots, varying from dense [4] to sparse [8]. Mantle usually does not reach substrate, leaving side of foot exposed [9]. Position of bursa copulatrix indicated by pale patch near mantle edge on right-hand side, about a quarter of body length from anterior [2] . Sometimes a white body (bursa copulatrix?) extends from right side [8] . Anus not far from posterior, most easily seen during excretion of grey-white semi-liquid faeces [7], or occasionally marked by small anal prolapse [5].

Head
Widest at anterior edge which meets sides at approximately a right angle [3]. Colour as body, except distinctly demarcated light oblong-ovate eye patches; white, yellow or grey [4]. Eye patches often enclosed above, below and in front by a rib which varies from indiscernible [9] to very distinct [6] giving a saucer-form to the eye patches. At the anterior edge of the head, the dorsal ribs often branch to join across the front of the head in a U [1]. Anterior divided by vertical slit [10] aligned with concavity on anterior edge of foot and vertical groove [9] in anterior edge of mantle; used for holding a filament of alga vertically when feeding.
Foot
Sole paler than dorsal surface of mantle; pale-brown [13],  whitish [6] or orange-yellow [10]. Anterior edge concave at mid-point. Posterior terminates in very short pale blunt point [5], not always visible. Translucent, showing ovotestis spheroids [10] in mature specimens.

Mid- and upper-tide levels; those at EHWS almost terrestrial. As a species, extremely euryhaline; some populations living where water at high tide is fully marine ( >30 p.p.t.) [16], and others where inundating water is < 3 p.p.t. [20]. But individuals are stenohaline, contorting [9] and climbing out if placed in water of salinity differing from what accustomed to.

On cushions of filamentous algae [16], damp mud in salting ditches [18], bare mud on tidal river banks, [21], underwater in channels draining muddy sand [17], and around edges of tidal pools on grazed saltings [20]. When submerged [17], or in damp or shaded conditions [15], remains exposed. If dry, contracts into spheroid and exudes mucus [11]. If dessication threatens, conceals itself just under surface of substrate.

Feeds on filamentous algae, holding a filament vertically between the lobes at front of head while it punctures it and removes the contents, leaving a colourless tube [22]. Vaucheria spp. usually quoted as food, but probably other filamentous species lacking cell wall divisions are used as well. Apparently an upper diameter limit on filaments that can be utilized, as observed in captivity to exhaust all available narrow filaments but to leave the thicker ones unaffected. Specimens on bare mud or muddy sand probably feed on growths (possibly of diatoms) coating the substrate [17].

Simultaneous hermaphrodite. Hypodermic impregnation; sharp style on end of penis punctures body wall of mate to enable injection of sperm. Spawn [22], May-September. Ova much smaller than L. senestra eggs, but more numerous; up to about 200 per spawn mass, deposited on filamentous alga when available. Black pigment spot in each ovum. Veliger larvae in plankton for up to four weeks before metamorphosis.

This confusion may be because many Twentieth Century keys and descriptions give little prominence to the frequent presence of ribs on the head of L. depressa. For example:
“The head is without trace of tentacles, distinguishing this species at a glance from Limapontia capitata and Limapontia senestra , which usually exhibit either crests or finger-like head-tentacles.” (Marine Species Identification Portal.)
and “ Head tentacles auriform ----- L. capitata.
-- head without a trace of tentacular expansions ----- L. depressa” (Thompson 1976).
Apart from Eliot in 1910, Twentieth Century illustrations of L. depressa mostly show it with no trace of head ribs, for example in Thomson (1976), Gascoigne (1975) [14a] and Hayward & Ryland (1995).
Yet, Alder (in Jeffreys, 1869) clearly mentions the ribs; “the lateral crests less elevated than in L. nigra, [L. capitata]”, and his partner Hancock’s illustration (in Eliot, 1910) [1] shows the ribs/crests clearly and accurately. In fact, the ribs on the head of some L. depressa specimens are more prominent [6] than the head crests of some L. capitata. [4Lc].
Occasionally, currents sweep specimens of Limapontia spp. into each other’s habitats. The confusion caused by a stranded L. capitata in a salting pool (full marine salinity), accompanied nearby by many L. depressa with prominent head ribs, can be seen in messages from the author to the Sea Slug Forum when he thought crests must be an indication of L. capitata.
Currently, January 2012, there is an accurate painting of L. depressa on a blog by an artist for the Marine Research Centre at Stockholm University, mis-identified as L. capitata. Probably the identifier assumed it was L. capitata because it has head ribs/crests. 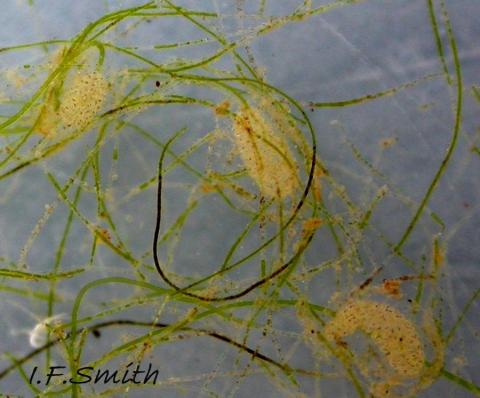 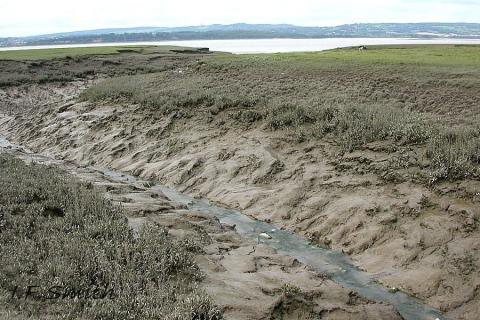 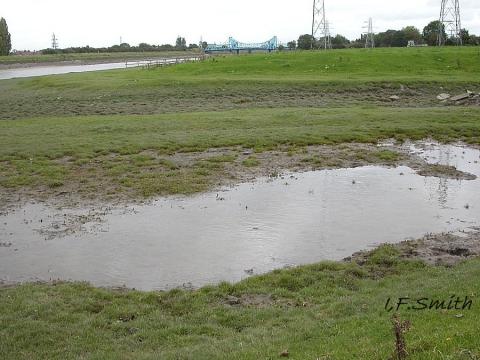 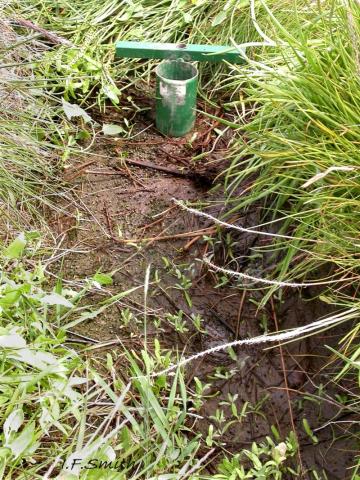 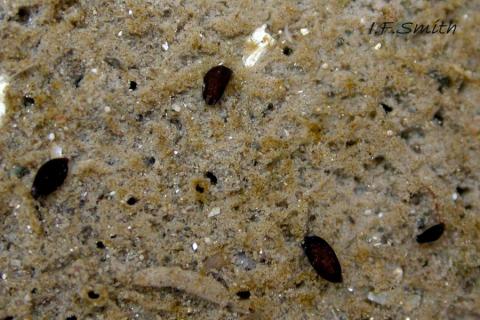 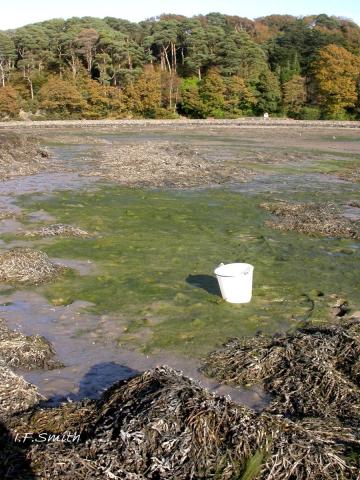 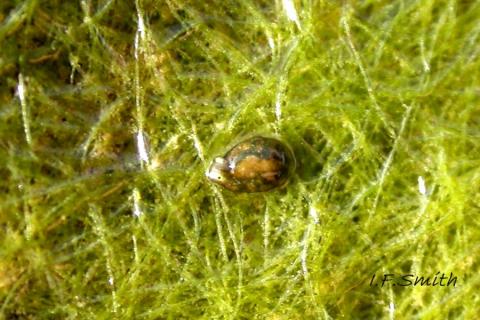 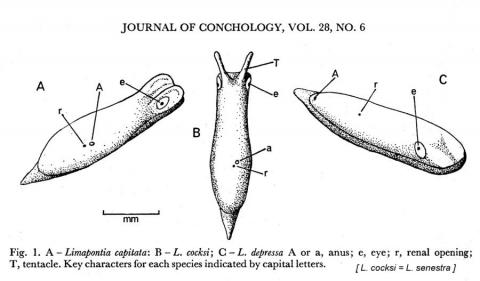 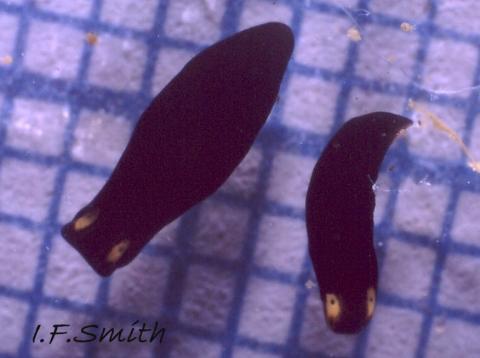 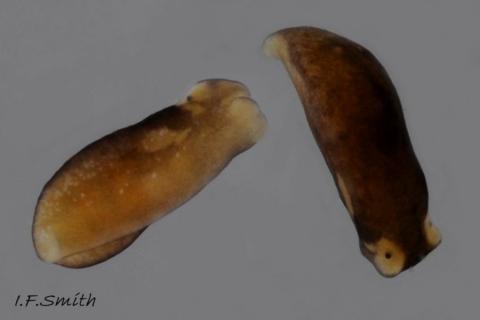 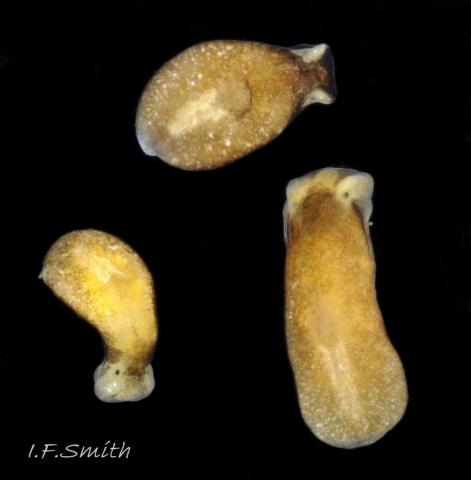 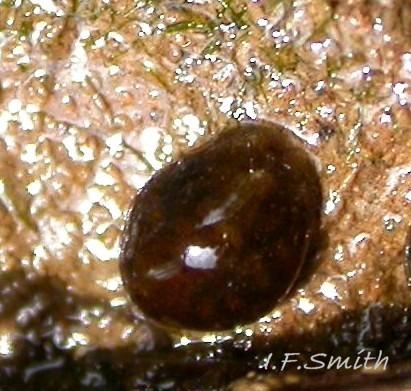