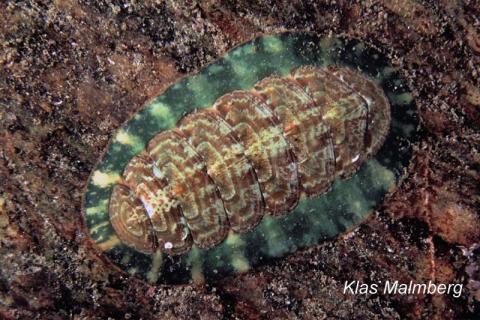 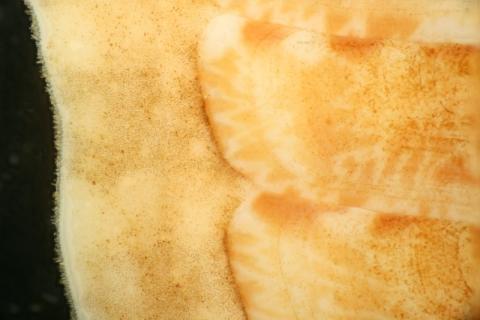 Size: Up to about 45mm long. Shape: Relatively narrow girdle with the shell making up 70% of the width. Valves are moderately tall with a definite keel. Shell colour: Colouration is typically from light red to dark brick red often mottled with brown or cream. However, other colours are known including beige, green and blue. Occasionally black deposits of iron or manganese salts occur. Sculpture: Valve surface appears almost completely smooth but does have numerous minute granules. Girdle: Covered by minute granules that give a leathery appearance. Purple-red to green and may be banded with orange.  Animal: Gills generally restricted to the rear of the grooves on either side of the foot (merobranch) but in some cases can extend further forward.

Most common on expanses of bedrock though also occurs on stones and pebbles. It feeds by grazing material from the rock surface using its radula. It can occur in fairly high densities (40-50 per square metre) making it an important grazer within the ecosystem. It occurs very low on the shore down to depths of 200m.

It is a northern species extending as far south as north Wales in the west and Yorkshire in the east. Elsewhere it occurs across the Arctic Ocean around Norway, Sweden, Greenland and the Atlantic coast of North America. 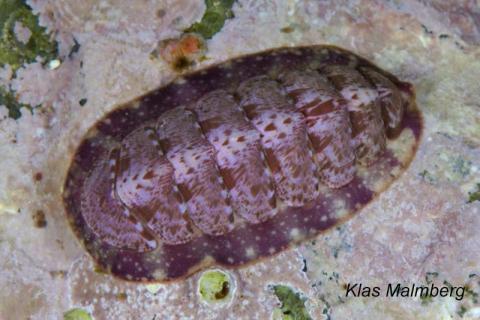