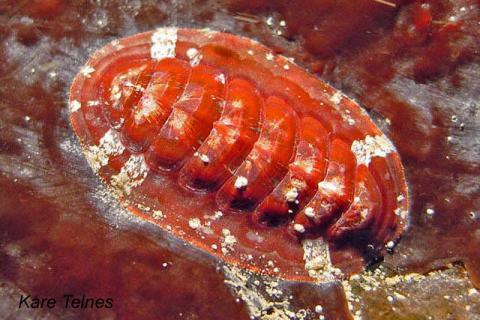 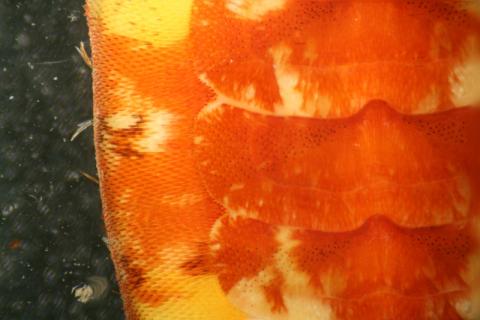 Size: Up to about 32mm long. Shape: Relatively wide girdle with the shell making up 60% of the width. Valves are relatively tall, curved and have a definite  keel. Shell colour: Typically red but runs from burgundy to orange and can even be yellow or green. Animal: Gills present all along the grooves on either side of the foot (holobranch).

The eight valves are relatively strong and include notches on the areas where the valves embed in the girdle; 15-20 notches in the head and tail valves and three pairs in each of the intermediate valves. This is the only British species of chiton that typically has more than one pair of notches in the intermediate valves. The valves appear relatively smooth to the naked eye. When viewed under a hand lens they are slightly granular and the head and tail valves and lateral areas of the intermediate ones display black pigmented spots. This is a very distinctive characteristic of this species. The colouration of the valves is typically red but runs from burgundy to orange and can even be yellow or green. An irregular marbling of cream or brown may be present.

The girdle is very distinctive when viewed closely being densely packed with cigar shaped spicules, each about 0.2mm in length. This gives the girdle a snake-skin like appearance. The girdle is fringed by short (0.1mm long) colourless spines. The colour typically matches the valve colouration. There are very often bands of cream most typically around the junctions of valves 1 - 2 and 7 - 8. The presence of such markings on an individual suggests it is very likely to be Callochiton septemvalvis.

Lives on the underside of stones and pebbles embedded in sand. It feeds by grazing material from the rock surface using its radula. It is most often found very low on the shore and shallow subtidal areas but can occur to a depth of 150m.

Occurs from Norway to the Mediterranean. It is found through-out the British Isles though generally is only found in low numbers.