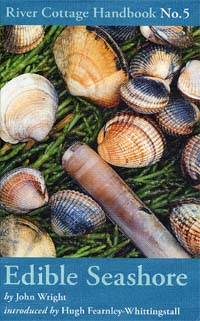 In these times of increasing providence when it comes to resourceful strategies to provide one's own food, the publication of Edible Seashore is very timely. This gem of a book, a robust compact little hardback which will fit into a large coat pocket or small rucksack contains just about everything you would want to know about foraging for food on the seashore and the enthusiasm of the author, John Wright, for his subject jumps out at you over and over again.

The book opens with a section that celebrates the 7000-mile long, fruitful coastline of the British Isles that harbours abundant edible plants and animals. The author has given us the benefit of his trial and error experiences, and the hazards he has encountered, in the matter of equipment, techniques, constraints, all of which are thoroughly covered. A chapter called The Rule Book is excellent. This discusses where to go on our coastline, who owns what coast, what rights to roam exist and provides the forager with the information needed to operate safely, competently and legally.

There is a chapter on Flowering plants and one on Seaweeds. The habitat, distribution, season and conservation status of each species in the book is given, with detailed sections outlining how to gather and eat the plant, seaweed or animal. The species accounts are infused with the author's personal experiences, with humour and with aspects of the cultural significance of the foods we can gather. Indeed the text is so fluently written, and so injected with humorous anecdotes and asides, it is a book that is easily read from cover to cover (as my husband proved).

The book tells us that seaweeds are extraordinarily nutritious. Most of us know they contain minerals (notably iodine) but they also contain vitamins and high proportions of good quality protein! Dulse (Palmeria palmata) can be 35% protein by weight. Armed with this knowledge I paused on a shore on the Skye field trip when I came across a fine young 'plant' of Dulse. I cut some tender snips off a frond with my knife. The taste was savoury and the texture chewy but not tough. It was a pleasant minor gastronomic experience. Apparently you can dry this alga and crumble it to produce seaweed 'crisps'.

Perhaps the section on molluscs will be of most interest to readers here. After a few basic caveats on molluscs generally, the author gives his six top tips for safe bivalve consumption - a useful 'digest'. In the species accounts there is a wealth of information on finding and gathering cockles, mussels, oysters and clam species. There are useful photos of some of the siphon holes of bivalve species, including the typical keyhole of the razor clams. Winkles, whelks and limpets are included. In the latter case the author lists both limpets and slipper limpets, the latter not traditionally being thought of as edible. "Anyone who enjoys eating pencil rubbers dipped in fish paste will find the common limpet a treat" states John Wright. He doubts the assertion of a friend who is a restaurateur that it is possible to cook limpets in a way that renders them tender. However I would refute his doubt - I have cooked limpets and offered them to guests as certain members of this Society would attest. The secret is to go for limpets that are not large. I also did not agree with everything John Wright had to say about oysters but then I am an addict! In the chapter on crustaceans he includes some of the more unusual species such as squat lobsters (they serve these in the Wet Weather Centre at the head of Loch Sligachan on Skye), shore crabs and velvet swimming crabs.

In the final section the text becomes a cookery book. The recipes have a fine pedigree, having been tested at the River Cottage HQ owned by Hugh Fearnley Whittingstall, who writes the foreword to this book. It tells you how to make genuine crispy seaweed (as opposed to the short-cut method using shredded cabbage) and there is a recipe for dulse and smoked fish tart. If you have never been able to face raw oysters, you might try oyster risotto, or a bacon and oyster omelette.

I start with something of a bias because I love the sea, the shore and all that one might find there. Eating wild foods is immensely satisfying. I have shown this book to several people who come from a cold start, and they have been much taken with it. At the end of a field session on the shore as conchologists, chased away by a rising tide, we retreat with our samples and specimens and records. Why not add another dimension and take away a pot of assorted clams, a pail of winkles, a haul of mussels or a bag of seaweed from a clean shore to eat for your supper?