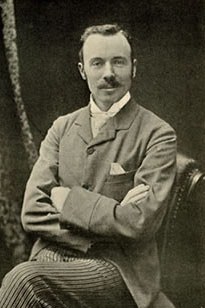 Joseph Thomson was born in Penpont, Dumfriesshire on the 14th. February 1858 in the house his father, a journeyman stonemason, had built for himself. His father was keen on geology and Joseph quickly shared this interest and in other branches of natural science. He was soon contributing papers on geology and from 1871 onwards, whilst the geological survey was at work in Nithsdale, he came to the notice of the great Professor Archibald Geikie.

He left school in 1873 and worked for a short time in his father’s quarry, then went on to Edinburgh University from which he came out in 1877 as medallist in both geology and natural history. He was indeed fortunate to have J. H. Balfour to teach him botany and James Geikie for geology. He was also greatly influenced by attending a course of lectures given by Prof. T. H. Huxley.

Thomson was appointed geologist and naturalist to A. K. Johnston’s expedition to Central Africa sent out by the Royal Geographical Society. On 5th. May 1879 they reached Zanzibar, but Johnston was dead from malaria at Behobeho by the end of June and Thomson suddenly found himself leader. He reached Lake Tanganyika on 3rd. November and set off to reach the headwaters of the Congo River, but a mutiny of his men alarmed by the warlike Warua obliged him to turn back when only a day’s march from the river. He returned via Tabora and Lake Leopold (Lake Hikwa = Rukwa ?) which he was the first white man to see, and regained the coast on 19th. July 1880. The result was a book "To the African Lakes and Back" in two volumes in 1881.

His mollusc collections from Lake Tanganyika made known a further selection of the extraordinary thalassic species which live in the lake, first brought to the attention of the scientific world by Capt. Speke and the Rev. E. C. Hore. Smith made known Thomson’s discoveries briefly in 1880 and more fully in a paper (1881) elegantly illustrated by three plates from that well-known team of A. H. Searle, lithographer, and Mintern Brothers, printers. Smith writes "To three of these attaches the greatest interest; for they have all the appearance of being modified marine types. And such in all probability is the case; for Mr. Thomson informs me that in his opinion, judging from the geology of the neighbourhood, Tanganyika at some remote epoch has been an inland sea, the saltness of whose waters has almost entirely vanished, leaving only a peculiar taste which can scarcely be described as brackish. The flavour is unpleasant; and when other water is procurable, that of the lake is not drunk by the natives". The pros and cons of the possibility of a Jurassic sea were argued out during the next 20–30 years; it is certain that no inland part of Africa was covered by sea in the Jurassic nor indeed since remote times and certainly not during the last cycle of continental drift.

He next undertook for the Sultan of Zanzibar an examination of the coal Livingstone had reported in the Rovuma Valley, but it proved to be useless shale. Next, under the auspices of the Royal Geographical Society, he undertook to open up a route between the seaboard of East Africa and the northern coast of Lake Victoria. He left the coast with 140 men on 15th. March 1883 and reached Taveta on 5th. May. The party then entered the territory of the dreaded Masai to find them in a dangerous state of excitement due to a conflict with Dr. Fischer who had just passed through. He climbed Kilimanjaro to 9,000 ft. and then proceded to Naivasha, and whilst his main party went to Baringo, he and 30 men made a rapid detour towards Mount Kenya. CMS missionary Rebman was laughed at when he claimed to have seen the snowy dome of Kilimanjaro in 1848 and Krapf was similarly treated when he reported sighting the glaciers of Mt. Kenya from Kitui some hundred miles away in 1849. It was considered impossible that snow-covered mountains could exist in the tropics. Thomson confirmed Mt. Kenya’s existence in 1883 when he passed close to the mountain on his way across Laikipia. On his way he discovered a whole range of mountains which reached 14,000 ft. – these he named the Aberdare Range after the then president of the Royal Geographical Society.

He then caught up with his party at Baringo and after a rest went on to Lake Victoria, reaching it on 10th. December, but soon retraced his steps since the King of Uganda’s treacherous nature was known to him. He visited Elgon on the way back and discovered the now well-known caves. On the last day of 1882 he was nearly killed by a wounded buffalo and had to be carried on a litter; they reached Naivasha where he went down with dysentery. Every day they were in danger of annihilation by the Masai. By April 1883 they caught up with coast traders and on May 24th. reached Rabai. Thomson returned to London in 1883 in poor health and was well received. His subsequent book "Through Masailand" was a great success (and still jolly good reading). The Masai had been renowned for their ferocity and to cross their country was a heroic feat.

By 1884 he was fit again and visited the Sudan where he made friends for Britain. In 1885 he received the gold founders’ medal of the Royal Geographical Society. Stanley was chosen instead of him to relieve Emin which was a pity since his route would have been simpler. In 1888 he explored the Atlas Mountains in Morocco. 1890 saw him in Kimberley in the interests of the British South Africa Company and he received his instructions from Cecil Rhodes. He explored Quelimane without upsetting the jealous Portuguese though while passing through their territory he was nearly killed by a fusillade of bullets. His route lay up the River Shire then to Blantyre and Kota Kota on the west of Lake Nyasa. They visited Lake Bangweolo after much trouble and threatened desertions, returning to Blantyre in February 1891. On this expedition he was joined by the son of James Augustus Grant (of Speke & Grant fame) who arrived from the Cape bearing instructions from Rhodes. Thomson wrote home to Grant describing his son as "a magnificent brawny fellow bronzed and bearded almost beyond recognition". He was back in London the follow¬ing October – his health was now permanently affected and after a bout of pneumonia he went to the Cape as a guest of Rhodes where he soon recovered and talked of visiting Mashonaland.. Lung disease broke out again and though he went to the south of France he was beyond help and died in London on 2nd. August 1895. He stands high in the ranks of African explorers and published a great deal in journals as well as many books.

He could work out the broad geological structure over vast areas with ease and this was his main interest but he also collected many botanical and zoological specimens. All his mollusc specimens were worked out by E. A. Smith in three short papers (1880, 1881A, 1881C). In contrast with so many bloodthirsty explorers, he never fired a shot, even in self defence, or left behind any needless graves. His immense powers of endurance can be judged frdm the fact that he sometimes travelled seventy miles in one day.

Most of the above information is taken straight from the Dictionary of National Biography. Collectors who were also famous explorers need no research to unearth details of their lives. I am grateful to the Oxford University Press for permission to quote from the DNB.

List of molluscs described from material collected by Joseph Thomson