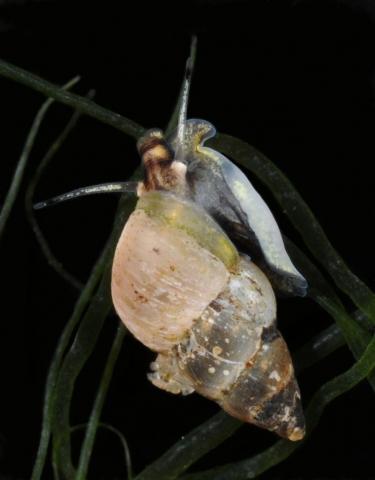 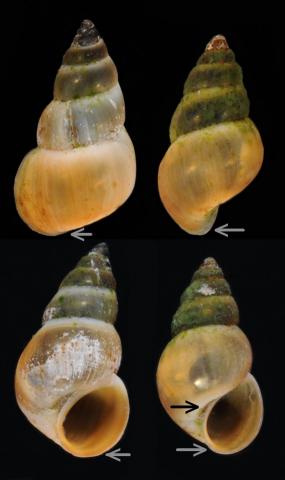 Shell
Usually up to 6 mm high, exceptionally 10mm. Conical with moderately elongated blunt spire. Small specimens have proportionately shorter spires, but shape varies independently of size.  Various shades of yellowish brown in water, duller when not immersed. (All specimen images linked to this account photographed in water.) Sutures usually stated to be very shallow with whorls flattened in profile, but some populations have deep sutures and well rounded whorls. Spire may be slightly translucent revealing light grey body inside. Aperture has pointed adapical end. Its basal end is elongated on small shells, but usually more rounded with a thicker lip on those about 5mm high and more. Aperture closed by tear-drop shape spiral operculum. Usually a small umbilical chink. Surface may have green, black, brown or reddish encrustations from the environment.
Body                                                                                                                      Flesh yellowish/whitish grey, marked black/brown and yellow/white. Foot  can be expanded at anterior into prehensile lobes. Sole translucent white. Single small pallial tentacle on right. Male has large yellow flecked sickle shaped penis.  Female adults and juveniles lack penis behind tentacles when body fully extended. Females have a pallial oviduct along right side behind tentacle. Head has long translucent whitish to greyish tentacles with yellow or white pigment flecks and a black subterminal band. Left tentacle thicker and less smooth than the right. Eye at anterior of yellowish, white or faintly pink patch at base of tentacle. Usually a darkly shaded band on tentacle at front of eye. Long bifid snout has strong transverse furrows. Some populations predominantly have all-black snouts with a light tip. Others mainly have  patterned snouts with a thin grey-white front edge, yellowish or whitish anterior, a black or dark brown subterminal transverse band, dark lateral lines which may branch forwards and towards each other, a dark area between the tentacles extending backwards and, sometimes, a longitudinal dark mid-dorsal line. Grey ctenidium sometimes visible within mantle cavity when body fully extended.

Hydrobia ulvae is very common on bare intertidal wet sand  and mud, especially on estuaries and saltings at salinities 5- 40 p.p.t.. Also on Enteromorpha and Ulva and in pools with soft substrate. Often at densities 5000 –9 000 /sq.metre, and occasionally to 42 000 /sq.metre. At all shore levels, varying with local substrate conditions. Feeds on small organic particles, diatoms and bacteria while crawling on substrate or lying buried except for aperture. When submerged, may float at water surface with aid of a mucus raft which traps diatoms etc. in the neuston. Spawn; gelatinous masses, covered in sand, containing up to 25 eggs or more, attached to shells of other individuals in spring and summer. Short veliger larva stage.An important part of the ecosystem in estuaries and saltings, providing food for birds, fish and parasites, altering the substrate with its faeces and affecting the abundance of the micro-organisms it feeds on.

North Norway to Senegal, including Baltic and Mediterranean. Very common on estuaries and saltings all round Britain and Ireland. 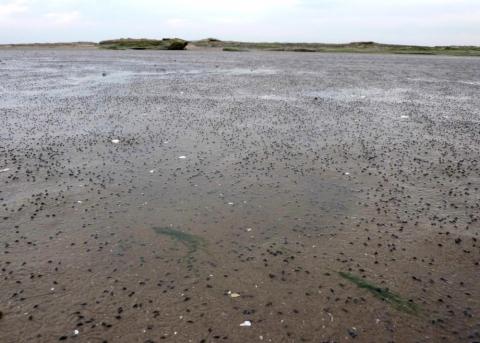 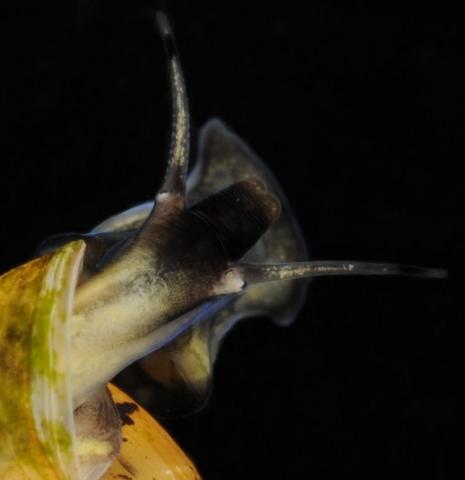 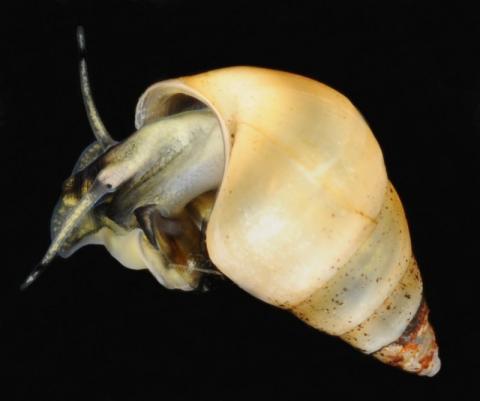 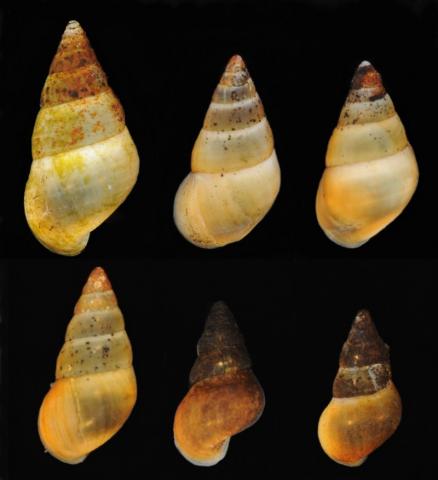 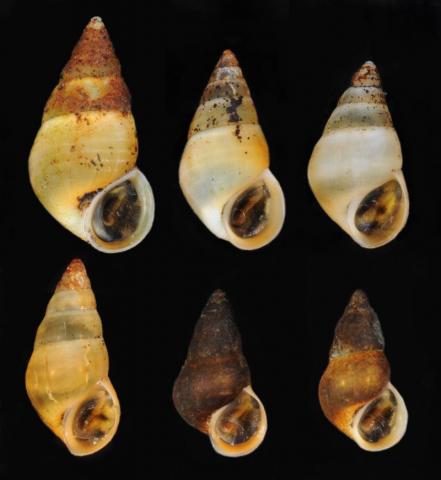 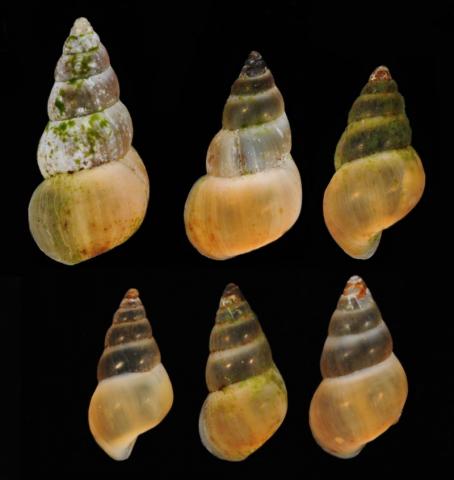 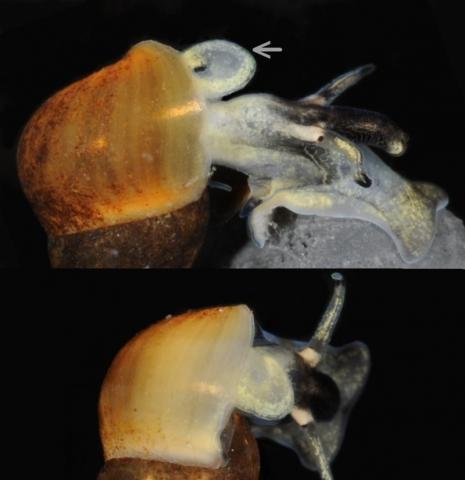 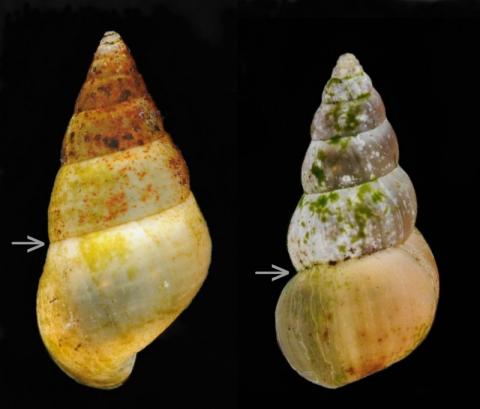 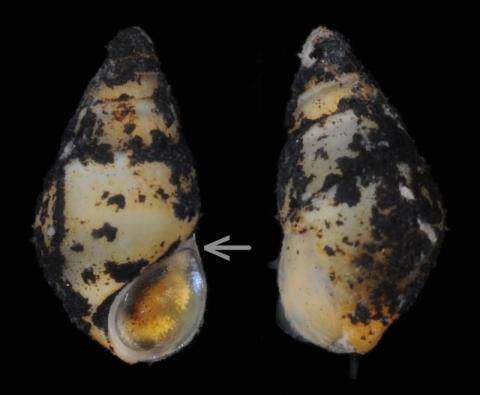 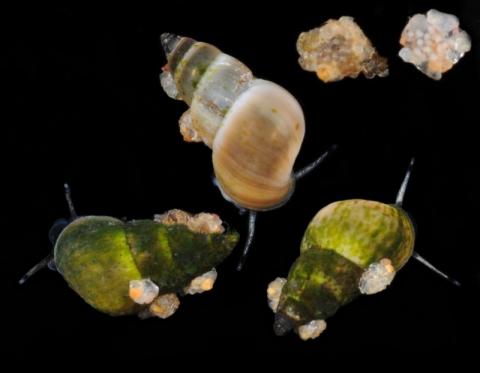 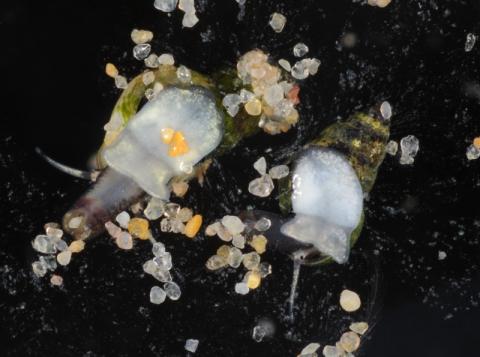 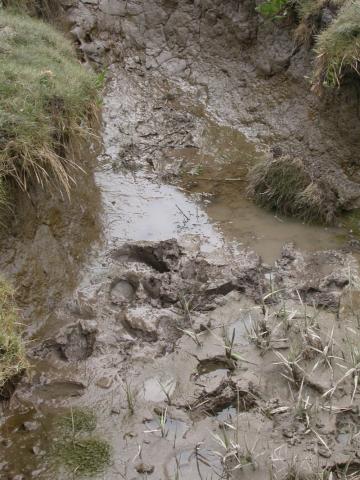