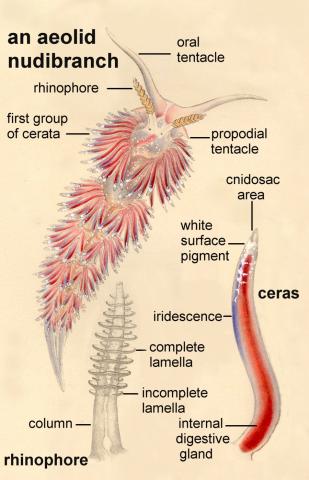 The Aeolidiacea are a superfamily in the order Nudibranchia (See links below for current taxonomy). Charles Darwin wrote of the “extreme beauty of the Eolidae (naked sea-slugs)”, and few would dispute that they are among the most colourful and graceful of animals.
All British species have smooth finger-like cerata on their backs. On most species the cerata are transparent or translucent, and the colour is due partly to pigment marks on the surface, but primarily to the contents of a branch of the digestive gland which extends into each ceras. With very few exceptions, aeolids feed on Cnidaria and ingest unexploded nematocysts (sting capsules) with their food. The nematocysts travel along special channels to, usually white, cnidosacs (storage spaces) visible at the tip of each ceras. If an aeolid is attacked, it releases the stored nematocysts in defence. It is unlikely that humans will feel the released nematocysts from a British aeolid, unless a large species is held against the lips (not advised), but a tropical species which feeds on Physalia (Portuguese man o’ war) can cause injury.
On top of the head there is a pair of rhinophores  which can detect chemicals from prey or predators. They may be smooth, wrinkled, or have a series of lamellae on them. Unlike the Dendronotacea, the rhinophores do not emerge from raised sheaths. On most species there is a pair of smooth oral tentacles on the front of the head, and, on some, the front corners of the foot are extended into propodial tentacles or lobes.
Spawn containing thousands of ova is laid in masses, or long lines or ribbons, often convoluted, and often arranged in spiral patterns. Veliger larvae hatch and swim in the plankton with the aid of cilia on two flaps called the velum. After a week or two they settle on the sea bed, lose their shells and transform into adults.

References and links
"Aeolidiacea" is no longer accepted as a valid superfamily. The text on this page applies to the current (2011) infraorder Aeolidida which contains three superfamilies.
Alder, J. & Hancock, A. 1845-1855. A monograph of the British nudibranchiate mollusca. London.
Thompson, T.E. & Brown, G.H., 1984. Biology of opisthobranch molluscs 2. London. 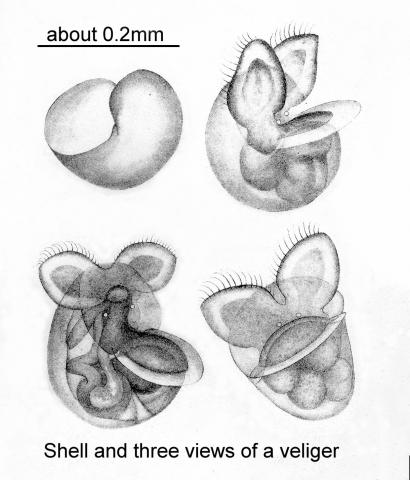